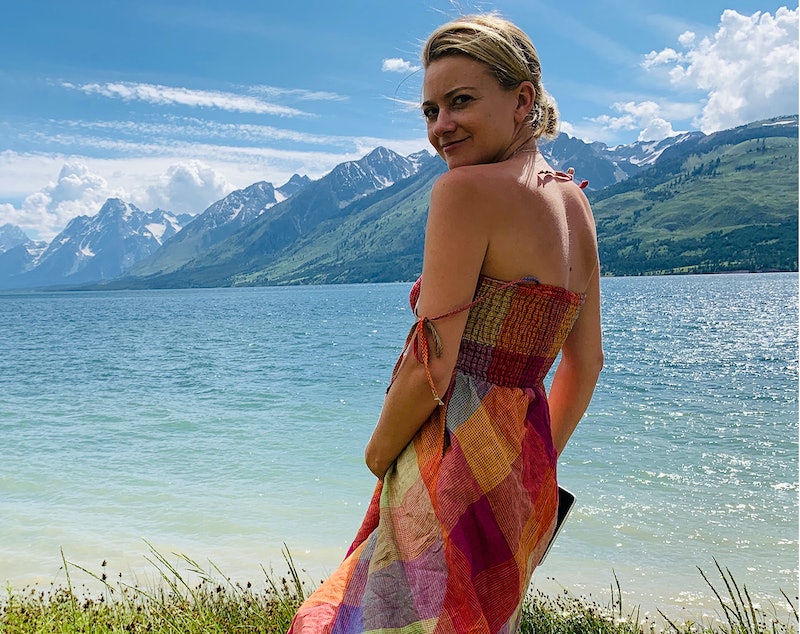 When celebrities (virtually) hang out with Bustle editors, we want to give them the chance to leave their mark. Literally. So we hand them a pen, a piece of paper, a few questions, and ask them to get creative. This time, Palm Springs star Meredith Hagner is leaving her mark in the Bustle Booth.

Meredith Hagner often relies on documentaries to help her get into character. For Search Party’s recently released Season 3 — in which she stars as Portia, an actress who testifies against her best friend on trial for murder — she watched Netflix’s Amanda Knox. To play the vapid bridesmaid Misty in this summer’s sci-fi rom-com Palm Springs, she watched the 2012 portrait of privilege The Queen of Versailles. But sometimes simply observing real life is the best way to craft a character. “I get a lot of inspiration overhearing someone at brunch,” Hagner tells Bustle from her car, on a road trip through Aspen with her Border Collie and her husband, fellow actor Wyatt Russell. “[These roles] are a walking Overheard New York [meme], that’s for sure.”

Between Portia, Misty, and her scene-stealing supporting turns in Set It Up and Younger, the 33-year-old Hagner has become known for her portrayals of a certain kind of millennial-pink-loving woman who’s prone to hashtagging “girl boss” and boomeranging herself drinking “rosé all day.” “These characters are a comment on white privilege and what an entitled woman [looks like] in this moment,” says Hagner. But the actor has an uncanny knack for bringing nuance and empathy to these women who might otherwise appear as villainous caricatures. “They’re varying degrees of narcissistic. Misty is more of amalgamation of a lot of self-obsessed women in my generation that are easy to satirize, but Portia really has a heart of gold, and on the show I get to explore why she is the way she is.”

Though Hagner aspires to play someone with a “slightly higher IQ” in her next project, she still thrills in embodying the type of women she playfully calls “human garbage cans of a person.”

“They capture a moment in time that I think we can all laugh at while still being like, ‘Hey, isn't it crazy how privileged we are and how obsessed with ourselves we are?’”