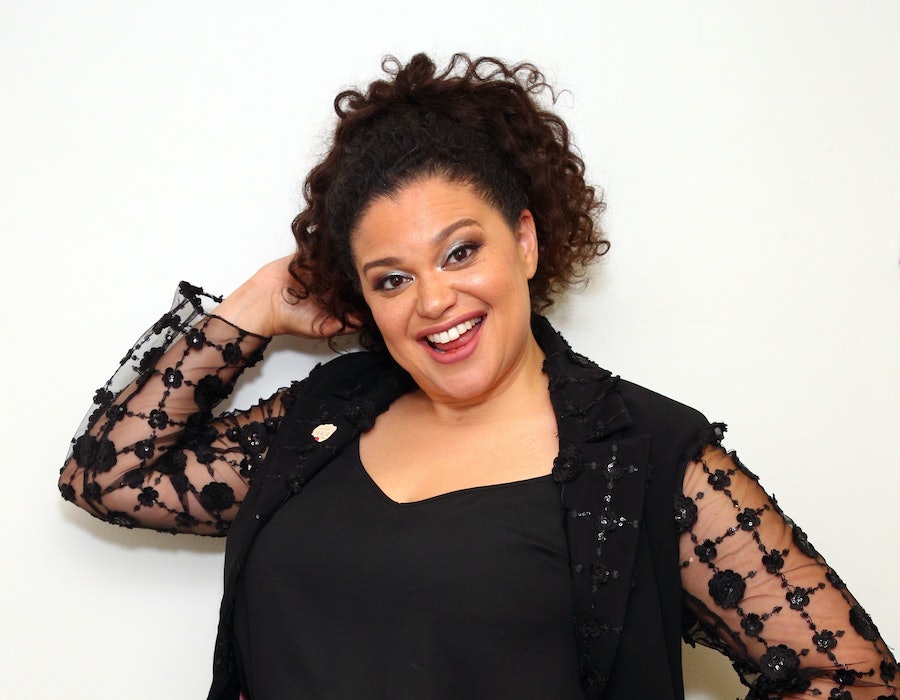 Comedian and actor Michelle Buteau is quickly becoming an ubiquitous on-screen presence. In 2019 alone, she had supporting roles in four rom-coms — Almost Love, Always Be My Maybe, Isn't It Romantic, and Someone Great — and starred in First Wives Club and Tales of the City. Now, Buteau's first book, Survival of the Thickest, is available at your favorite book retailer, and you can start reading it now, exclusively on Bustle.

One of the year's most relatable books, Survival of the Thickest covers 43-year-old Buteau's entire life so far. Beginning with the author's childhood in New Jersey, the memoir-in-essays moves on to discuss Buteau's marriage to Dutch photographer Gijs van der Most and their long journey to become the parents of twins Hazel and Otis, who were born via surrogate in early 2019.

In the excerpt below, Buteau recounts her breast-reduction surgery and her reasons for pursuing it — with the support of her father and skepticism of her mother — all told with the comedian's signature wit.

People treat you differently if you’re a bigger person. It’s just a fact. Having big boobs is like rocking a super-short haircut (hear me out): You have to dress around them. You can’t just put something on and do you.

After college my boobs just kept getting bigger. One was a triple D and the other was an E. I was uncomfortable and it was hard to do anything. Sit, stand, walk, dance. I had to wear a bra to bed. It was crazy exhausting. I was naturally a happy person, but it was harder and harder to find joy. My mother would always tell me that my boobs were too big. She’d say it in a way where there was disdain in her voice. As if I chose this. Of course you don’t want to disappoint your mother, but what if you literally just woke up and she got mad at your face? That’s what that felt like. And, PS — I inherited these, memba dat?

My dad introduced the idea of a breast reduction to me. He’s a real one. He’s one of those cuts-through-the-bullshit kinda guys. If he asks a question, it’s because he wants to know. He doesn’t care for polite talk; he believes that is for lesser beings. (I know, I KNOW.) My dad said, “You don’t look happy or comfortable, and you are the type of person that needs to be happy and comfortable. One time you joked and said your bra is the stuff bridges are made of. That was sad. Let’s look into a breast reduction.” And that was that.

I didn’t know what to make of it. Hell, I don’t like when I get my cuticles cut, so obviously this scared the shit out of me. But I did some research (truly Google had just come out), so I was interested. My mother was vehemently against it. She said “Metchelle, You don’t go uhndah dee knife unless you ‘af to.” But of course I “‘af to!!” I’m the equivalent of one of those women on The Howard Stern Show who can crush beer cans with their tits. My tits are so big #howbigarethey I can smuggle sixty-five pounds under them. And they were going National Geographic at this point. They never grew out, they just grew down. Half of my tit was just areola.

When I’d make out with my college boyfriend he had to lift my tit up in order to find my nipple to suck on it. To be honest, when he hoisted these fleshy sandbags up, my shoulders finally stopped hurting! At that point I wondered if I’d ever make enough money to have someone just hold my tits up for me. I went to this downtown trendy Miami doctor for a consultation. My father came with me for support. My mother wanted nothing to do with it. I told the front desk receptionist that I was interested in breast augmentation because that’s what I thought it was called. She looked at me sideways.

Great, she has an attitude. Whoops! I thought augment was just to change something but it in fact means to make something bigger! Could you imagine what this poor woman was thinking? She probably assumed I was there to donate.

I ended up getting a breast reduction, and it’s the best thing that could have ever happened. Insurance didn’t cover it because I was too tall and too heavy to qualify for whatever bullshit rules applied, so we had to pay out of pocket. I couldn’t have thanked my dad enough. I don’t remember how much it was, but it was truly a priceless gift. I was in pain for a few weeks because boobs are just so sensitive, but I was able to see my feet, and that was amazing. I really think Dolly Parton is the only person that can pull off boobs like that. They’re just so cumbersome. I’ll never forget the day I strapped on two exercise bras and just went jogging. It was amazing. I felt like I was free in a way that I hadn’t been since before puberty.