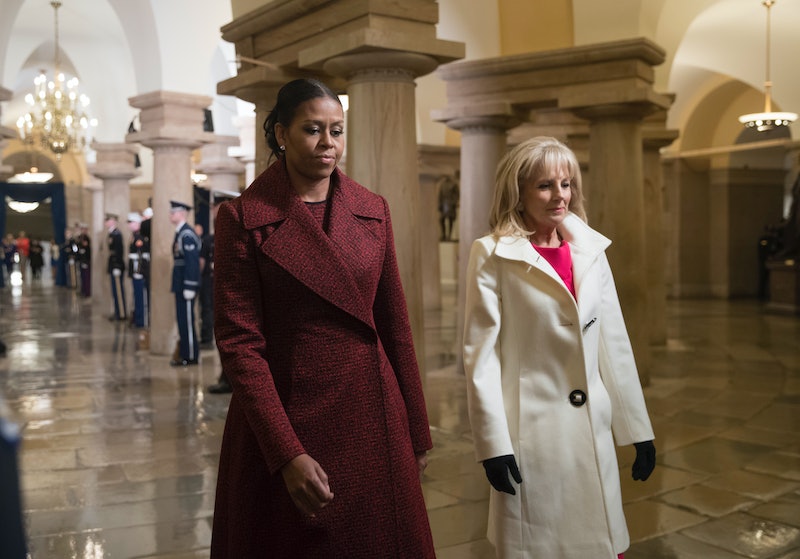 On Friday, Dec. 11, the Wall Street Journal published an op-ed that criticized Dr. Jill Biden's use of her title. Apparently, writer Joseph Epstein thinks Biden should drop the "Dr." before her name, calling it "fraudulent, not to say a touch comic" because she's not a medical doctor. For the record, Biden earned her title and the right to use it by completing a doctoral degree program in education from the University of Delaware in 2017. The op-ed sparked backlash from readers, with many critics calling it sexist and misogynistic. Biden's own spokesperson took to Twitter, writing that the article is a "repugnant display of chauvinism" and a "disgusting and sexist attack." Former First Lady Michelle Obama seems to agree with the outrage and defended her friend, adding that she saw Biden take on many responsibilities at once during their time in the White House together.

"Right now, we’re all seeing what also happens to so many professional women, whether their titles are Dr., Ms., Mrs., or even First Lady: All too often, our accomplishments are met with skepticism, even derision," she wrote on Instagram. "We’re doubted by those who choose the weakness of ridicule over the strength of respect. And yet somehow, their words can stick—after decades of work, we’re forced to prove ourselves all over again." Obama went on to ask, "Is this really the example we want to set for the next generation?"

While Obama did not mention the op-ed or WSJ specifically, she went on to defend Biden and share why she strongly believes the educator will make a great First Lady. "Dr. Biden gives us a better example," she wrote. "She will be a terrific role model not just for young girls but for all of us, wearing her accomplishments with grace, good humor, and yes, pride. I’m thrilled that the world will see what I have come to know—a brilliant woman who has distinguished herself in her profession and with the life she lives every day, always seeking to lift others."

Already setting a great example, Biden has not listened to Epstein's offensive op-ed. In fact — through her @DrBiden Twitter account — she promised voters, "Together, we will build a world where the accomplishments of our daughters will be celebrated, rather than diminished."