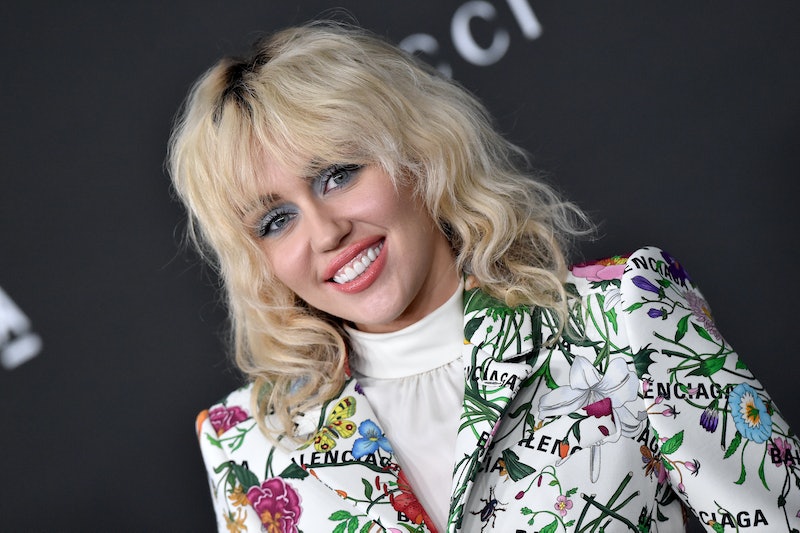 It’s been 11 years since Miley Cyrus’ viral bong video was leaked by TMZ, and the “Prisoner” singer wants to commemorate the occasion by making it a national holiday. The pop star made the suggestion on Instagram on Sunday, Nov. 28, next to a screenshot from the infamous video. “11 years ago,” she wrote alongside a smoke emoji. “Can we petition for a national holiday?”

In the video, which was reportedly recorded five days after Cyrus’ 18th birthday, the then-teenager was smoking out of a bong in her Los Angeles home. After explaining that she was experiencing “a little bit of a bad trip,” the Hannah Montana star broke into a fit of laughter when she misidentified a man in the room as her ex, Liam Hemsworth.

A source told TMZ that Cyrus was smoking salvia, a natural herb with psychedelic qualities that is legal in California. But even though she wasn’t breaking the law, the “Midnight Sky” singer was heavily criticized, not only by the public but also by her own father. “Sorry guys. I had no idea,” Billy Ray Cyrus tweeted shortly after the video leaked. “Just saw this stuff for the first time myself. I’m so sad. There is so much beyond my control right now.”

In 2011, Cyrus apologized in an interview with Marie Claire. “I’m not perfect...I made a mistake,” she said. “I’m disappointed in myself for disappointing my fans.” And when the interviewer pointed out that college students across the country are doing the same thing, Cyrus said it didn’t matter because “they’re not Miley Cyrus.” “They’re not role models,” she said. “So for me it was a bad decision, because of my fans and because of what I stand for.”

While she may have been apologetic after the video leaked, Cyrus has seemingly changed her tune. In 2020, she honored to video’s 10th anniversary by posting the full video on social media. “Happy 10 year anniversary to the groundbreaking video of a teenager smoking a bong & saying dumb sh*t to their friends,” she wrote, adding that she wouldn’t consider the “director” of the video a friend anymore.

Elsewhere in the caption, the former Disney Channel star said that she remembers that moment “like it was yesterday” before issuing a correction. “J/K I don’t remember sh*t because I was f*cked up,” she wrote. She also confirmed in the hashtags that it was really salvia and that marijuana simply doesn’t have the same effect. “#YesItWasReallySalvia,” she concluded. “#IfYouFindWeedThatDoesThisToYouSHARE.”

Now that 11 years have passed, it seems that much of Cyrus’ fans have gotten over the controversy as well. “This quite literally made me the woman I am today,” Instagram user @carleigh.kenny commented when the singer suggested we recognize Nov. 28 as a national holiday. “I would totally sign that petition,” @wheresmarisgift added. All in favor, say “Aye.”