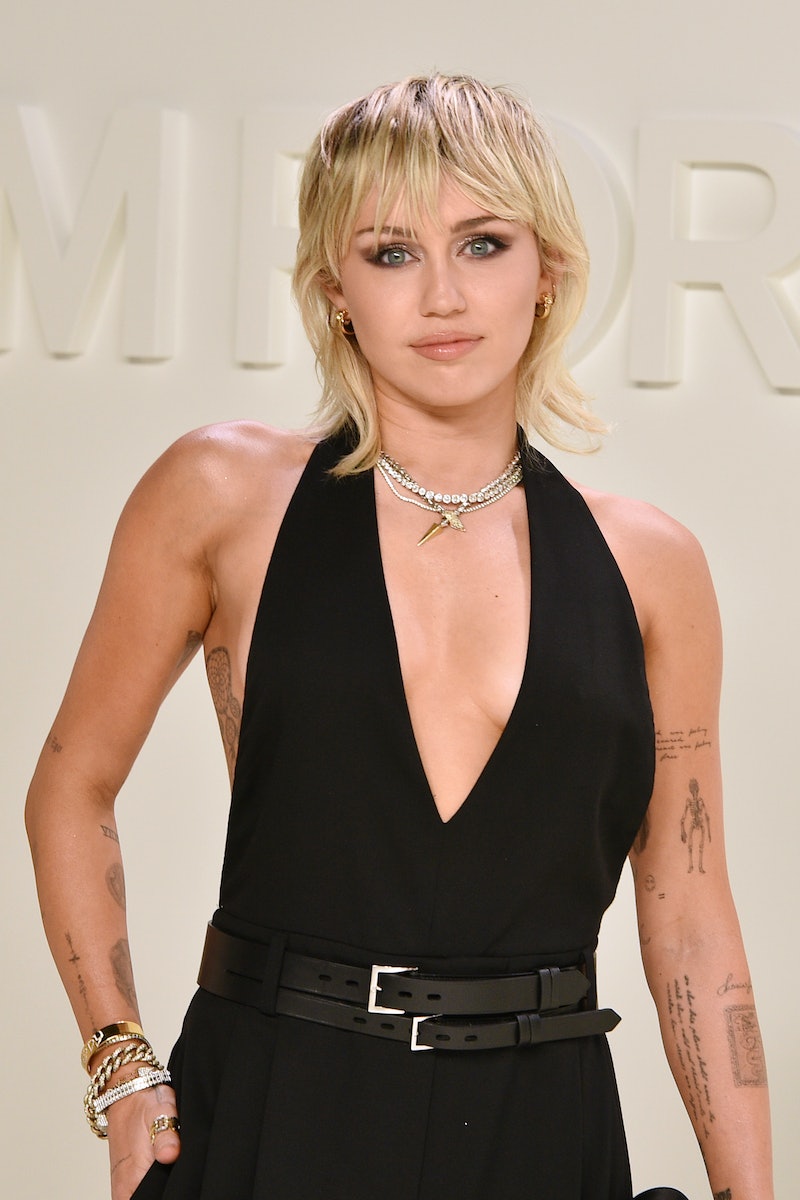 If you're wondering how Miley Cyrus' love life is going, she just spelled it out for you in the steamy video for her new single "Prisoner." After driving a tour bus recklessly through New York City and getting her face licked by collaborator Dua Lipa, a few telling words flashed across the screen in the last frame: "In loving memory of all my exes, eat sh*t." Exes aside, though, who is Cyrus dating? With her new album Plastic Hearts set for release on Friday, Nov. 27, fans are curious to know if she's moved on with someone new — especially after her recent split from Cody Simpson this past summer.

Currently, it seems the "Midnight Sky" singer is single and taking some much-needed time to focus on herself. While promoting her upcoming album, Cyrus opened up to Zane Lowe for Apple Music on Nov. 23 and revealed her sobriety was impacted by the coronavirus pandemic. "I would never sit here and go, 'I've been f*cking sober,'" she said. "I fell off and I realized that I now am back on sobriety, two weeks sober." But just because the pop star is making herself a priority right now doesn't mean she hasn't spilled some tea about her past relationships in recent months.

In a Nov. 2 interview on the Scandinavian talk show Skavlan, the host asked Cyrus if she's become more or less emotional with age. "It depends if you ask dudes I've broken up with," she responded. "They'll say less. But I think more." However, Cyrus doesn't waste time sulking about past relationships. "I've gone through a lot of trauma of loss in the last couple years," she said, possibly hinting at the end of her decade-long romance with ex-husband Liam Hemsworth in Aug. 2019. "I didn't spend too much time crying over it."

Cyrus and Hemsworth — who met on the set of their movie The Last Song in 2008 — had a rep announce their split in a statement to People. "Liam and Miley have agreed to separate at this time," the agent said, adding that it was time for them to prioritize themselves and their careers. In Dec. 2019, roughly a year after their secret nuptials, TMZ reported that the exes reached a settlement in their divorce. This past January, the divorce was reportedly finalized.

"I recently went through a very public divorce that f*cking sucked," Cyrus said on Joe Rogan's podcast in Sept. 2020. "What really sucked about it wasn't the fact that me and someone that I loved realized that we don't love each other the way that we used to anymore. That's OK, I can accept that. I can't accept the villainizing, and just all those stories."

Following her split from Hemsworth, the singer went on to have a brief summer fling with Brody Jenner's ex-wife, Kaitlynn Carter. Come October, Cyrus seemingly confirmed that she started dating Simpson when she shared photos on Instagram from the hospital where she was being treated for tonsillitis. "BF coming to visit me at the hospy," she wrote alongside pictures and videos of the Australian artist at her bedside. Less than a year later, in Aug. 2020, Cyrus revealed the two had split on Instagram Live, citing that they were both working on themselves and figuring out their own paths.

About a week later, the "Slide Away" singer opened up to People about breakups without mentioning Simpson explicitly. "I'm a very logical person," she said, adding that she tries not to lose sight of reality while in a relationship. "I really try not to get lost in emotion, because our emotion lies to us. Our emotion sometimes makes us believe that every thought that we think is real." Cyrus instead prefers to make lists and weigh out the pros and cons of a split to keep everything in perspective.

Those lists aren't all Cyrus has been writing lately. In an Oct. 22 Instagram post, the musician revealed that she started working on her new album two years ago when she thought she "had it all figured out." But when her house burned down in the 2018 California wildfires, the flames took the music along with it. "Nature did what I now see as a favor and destroyed what I couldn't let go of for myself," she wrote. The missing pieces of the album, which Cyrus described as a "continual autobiography," have now been filled in with tracks that feel more relevant to the singer at this point in her life, which hopefully means we'll get some songs about her love life.

Regardless of whether or not Cyrus' upcoming album hints at her relationship history, fans of the singer can relax knowing that the pop star is doing well on her own. "I guess I really don't need to be in a relationship at all," Cyrus said on Rogan's podcast in September. "This is a super pivotal moment for me right now. I haven't been single [since] 2015." And when she's ready to date again, the singer told Call Her Daddy that she wants to date someone who is sober, which she finds "very sexual."