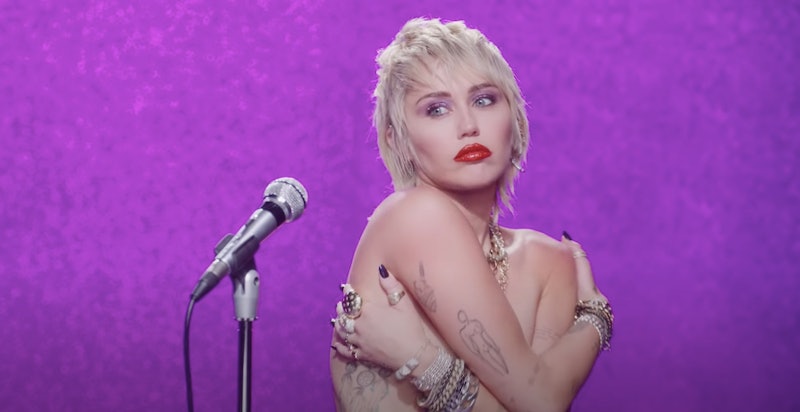 As she says herself in her new single, Miley Cyrus doesn't belong to anyone right now. While talking about her newest single with fans during an Instagram Live, Miley Cyrus confirmed her split from Cody Simpson while promoting "Midnight Sky" and the music video, which the singer directed herself. According to E! News, she began by stating that she wanted to "get something that is obvious out of the way," before addressing the reports that she and Simpson had split after 10 months together.

"A year ago, almost to this exact date, the media tried to tell my story for me and control my narrative, and I'm just not accepting that," Cyrus explained, referring to her highly-publicized divorce from Liam Hemsworth in August 2019. As for her split with Simpson, the singer explained that, "For right now, two halves can't make a whole and we're individually just working on ourselves to become the people that we wanna be. Like everybody else at this age, we're just deciding who we wanna be with our lives, what we wanna do with our lives."

Cyrus also emphasized that even though she and the Aussie musician had called it quits, things still remain amicable between them. "So, don't make it some drama story if next week we're out hanging out or getting pizza. We've been friends for 10 years and we're gonna continue to be friends," she said. "Just don't make it something that it is not. And with that being said, I'm done with the bullsh*t." Simpson also congratulated Cyrus on the release "Midnight Sky" on his Instagram Story, writing that he was "so proud" of the singer and everything she achieved.

Cyrus' new single is the perfect anthem for her new independent status, as she declares in the lyrics of her '80s-inspired song, "It's been a long time since I felt this good on my own" and "I was born to run, I don't belong to anyone / I don't need to be loved by you." During an interview with SiriusXM's The Morning Mash-Up, the former Hannah Montana star explained that the track is influenced by her realization that some things that people consider to be "forever" often doesn't last very long.

"I think ["Midnight Sky" is about] my relationship with the stigma. That 'forever,' if it's not successful or if you claimed something to be forever and you fail, then you're a failure," the singer explained, referencing the lyric "forever and ever, no more," in particular. "I think we're kind of set up for devastation — in that, from the time we're little kids, we're taught to claim other humans as our best friends forever. And you just don't know who you're going to be sitting with here right now."

She continued, calling out the high standard women are held to in relationships. "We, especially as women in relationships, a lot of the time we can get villainized when "forever" doesn't happen," she explained, adding, "And I think that you're just really setting yourself up to kind of be disappointed — and not from a bitter or resentful way, but from a realistic and logical standpoint, especially in modern society. We're changing and evolving and understanding ourselves from such a different perspective that it just feels like forever is definitely a big word."