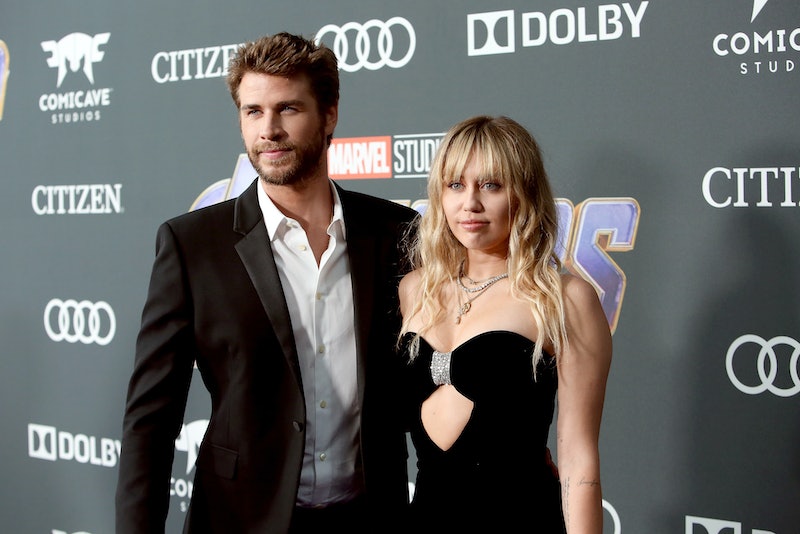 Weeks after the news of their split shocked fans everywhere, Liam Hemsworth has filed for divorce from Miley Cyrus, according to a report from TMZ. The couple previously announced on Aug. 10 that they had parted ways after less than a year of marriage. (Bustle has reached out to Hemsworth's rep and Cyrus' lawyer for comment about this latest update, but has not yet heard back.)

On Aug. 21, TMZ reported that Hemsworth filed for divorce in Los Angeles and cited "irreconcilable differences" as the reason for the split. Additionally, the publication reported that the couple had signed a pre-nuptial agreement prior to their December wedding, which outlined that they are to keep their earnings during the marriage separate.

As previously mentioned, this latest news on the Hemsworth and Cyrus split front comes a couple of weeks after they first announced that they were separating. People detailed on Aug. 10 that the couple, who had been together on and off for ten years, were splitting up after about eight months of marriage. "Liam and Miley have agreed to separate at this time," a rep for Cyrus told the publication, and continued,

"Ever-evolving, changing as partners and individuals, they have decided this is what's best while they both focus on themselves and careers. They still remain dedicated parents to all of their animals they share while lovingly taking this time apart. Please respect their process and privacy."

Since news broke regarding their split, both Cyrus and Hemsworth have addressed the matter in their own, unique ways. On Aug. 12, the Hunger Games star took to Instagram to comment on the breakup, writing, "Just a quick note to say that Miley and I have recently separated and I wish her nothing but health and happiness going forward." He went on to tell his followers, "This is a private matter and I have not made, nor will I be making, any comments to any journalists or media outlets. Any reported quotes attributed to me are false. Peace and Love."

As for Cyrus, she recently released her single, "Slide Away," on Aug. 15, which seemingly addressed her split from Hemsworth. While it's evident that the track is a breakup song and the timing of its release points to it being a tie back to her recent relationship news, the singer hasn't revealed whether or not the song is actually about her on-again, off-again love.

According to a source, Cyrus simply released "Slide Away" to tell her side of the story in the most positive way she knew how. "Her song was her way of telling her story without having to say anything at all,” the source told People. “She isn’t trying to bash him, but she wants to be able to share what she’s been going through.”

Even though Cyrus and Hemsworth have officially gone their separate ways, based on the couple's multiple statements about the news, it sounds as though the former husband and wife duo are still trying to tread these new waters in the best and most respectful ways they know how.

More like this
5 Wild Theories About Miley Cyrus’ “Flowers” Music Video
By Jake Viswanath
Lizzo Calls Beyoncé “The Artist Of Our Lives” During Her Grammys Speech
By Alyssa Lapid
All The Best Celebrity Reactions At The 2023 Grammys
By Brad Witter
9 Photos Of Celebrity Couples & Unexpected Duos At The 2023 Grammys
By Jake Viswanath
Get Even More From Bustle — Sign Up For The Newsletter
From hair trends to relationship advice, our daily newsletter has everything you need to sound like a person who’s on TikTok, even if you aren’t.