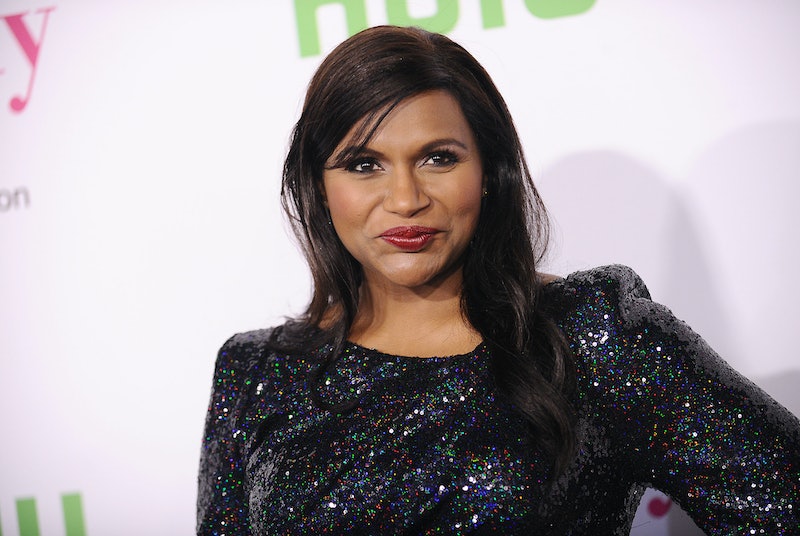 OB/GYN Mindy Lahiri may have changed the game for Indian women on TV à la The Mindy Project, but creator and star Mindy Kaling didn't want the sitcom to be focused solely on ethnicity. Kaling spoke to Vogue India for a cover interview on Tuesday, Dec. 1, addressing all things career and motherhood. When the topic turned to representation, Kaling — the first Indian American to have her own network show with the series — revealed that she didn't share the same vision for the series as TV executives.

Kaling touched on the subject after Vogue noted some of the disapproval surrounding the Diwali episode of The Office, the NBC sitcom that burst Kaling into the pop culture zeitgeist as Kelly Kapoor. "It's hard because it has to mean so much to so many people," the actor said of the criticism. "The Mindy Project wasn't ethnicity-driven. For a lot of white executives at the TV networks, they kind of wanted it to be. They felt more comfortable with it being about an Indian woman who felt out of place in America educating white people."

Though the actor said that she can certainly relate to that storyline as a woman of color in the United States, "it was not the most interesting thing, coming from The Office." And even though that wasn't quite what she had in mind for The Mindy Project, Kaling revealed that she really does enjoy those kinds of stories. "I think there should be more of them, and I might even do a show like that, but I do think people [were] surprised and put off that I didn’t embrace those kinds of stories early on in my career," she added.

Interestingly, Kaling has spent much of this year embracing stories that pay homage to her Indian roots. In April, she released Netflix's Never Have I Ever with co-creator Lang Fisher, a coming-of-age series about an Indian American teen (Maitreyi Ramakrishnan) dealing with the trials of high school and personal grief. Loosely based on her own childhood, Kaling's series received critical success since its debut — not to mention, a Season 2 renewal this summer.

In an interview with USA Today in April, Kaling reflected on the validating experience. "It was really cathartic in the writers' room to have these Indian writers corroborate the stuff that I thought was so weird [growing up]," Kaling said. "We're hoping that in a larger way, Indian kids who watch us will be like, 'Oh, my God, I did that, too.'"