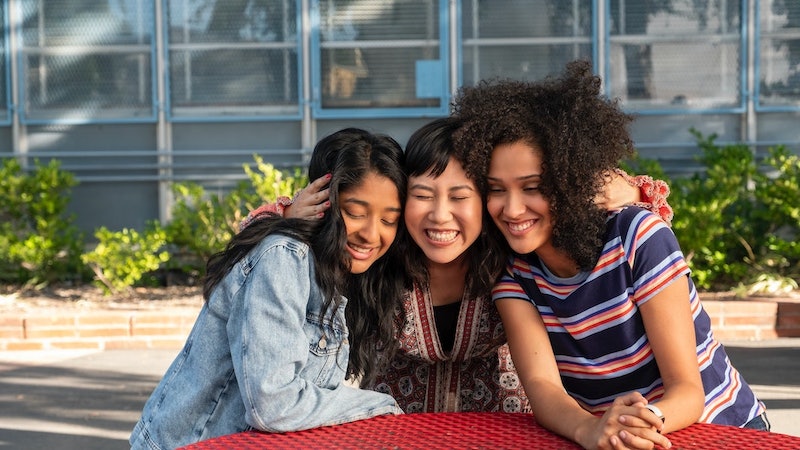 Huge news: Maitreyi Ramakrishnan got bangs. Or, more importantly, her Netflix series Never Have I Ever has been officially renewed for a second season. The series' co-creator Mindy Kaling shared the news on Instagram on July 1 with a clip of the cast dialing into a Zoom meeting. In the clip, Ramakrishnan — who plays lead character Devi in the coming-of-age series centered on an Indian-American teen — tries to share the news with her co-stars Jaren Lewison (Ben), Darren Barnet (Paxton), Poorna Jagannathan (Nalini), Ramona Young (Eleanor), Lee Rodriguez (Fabiola), and Richa Shukla Moorjani (Kamala) — but keeps getting interrupted by comments on her new bangs.

“Thanks for hopping on the Zoom so quick,” Ramakrishnan says. “Once everybody’s on, I’ve got some awesome news to tell you guys.” Rodriguez then interjects, “You got bangs? They look really good.” Lewison then dials in and asks, “Maitreyi, what’d you do to your hair?” Later, Jagannathan, Ramakrishnan's onscreen mom, questions, "New quarantine look? Did you cut it yourself?" Once Barnet and Moorjani dial in and similarly remark on Ramakrishnan’s new bangs, Lewison muses, “It seems crazy to get us together to talk about your bangs.” Finally, she cuts to the chase: “I just wanted to tell you guys that Never Have I Ever is being renewed for Season 2.” Her bangs do look pretty great, though.

Kaling captioned her Instagram post, "[Co-creator Lang Fisher] and I are incredibly grateful for our entire cast, crew, and the team at @netflix. Thank you for watching, sharing and connecting with this show.”

The cast’s announcement did not include an official premiere date, only that a second season would be “coming soon.” This comes a few months after the series’ April 27 premiere on Netflix. Loosely based on Kaling’s own childhood, Never Have I Ever follows Devi, an Indian-American high school teen dealing with both the trials and tribulations of adolescence and the trauma of her father’s (Sendhil Ramamurthy) death.

As for what Season 2 could entail, the first season left off with quite a number of cliffhangers that need to be addressed — hello Team Paxton vs. Team Ben. In an interview with Variety in May, Ramakrishnan outlined some ideas for Season 2 and what she wanted for Devi. “Three main things — understanding that she needs to be more appreciative of her family and her friends because her friends do a lot for her… and also understanding where her mother’s coming from,” she said. “Then also the idea of approaching that grief — confronting it, having that battle, even though it’s something uncomfortable to think about.” Lastly, Ramakrishnan hoped Devi learns to embrace her culture, “Because that is so important in a world where identity is everything.”