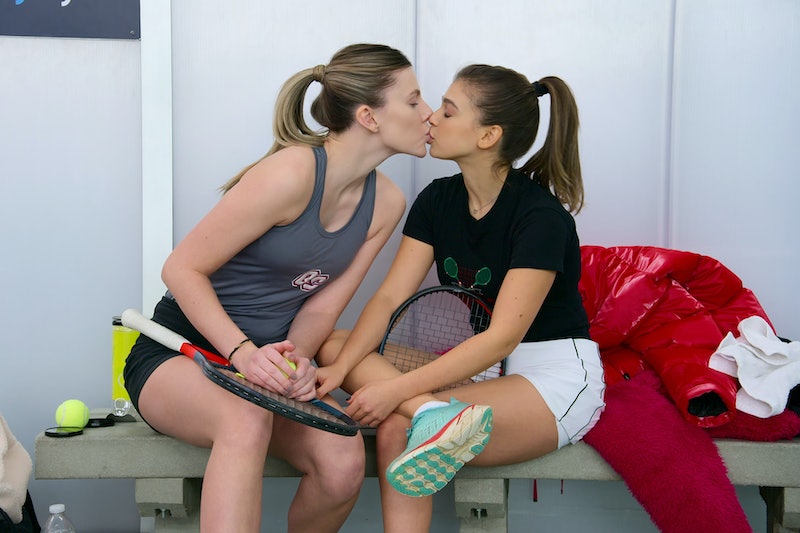 After coming out as bisexual during the first season of Netflix’s My Unorthodox Life, Miriam Haart didn’t waste much time introducing the world to her girlfriend, Nathalie Ulander. “Secrets out, and so am I,” Miriam captioned romantic July 2021 Instagram photos of them in Paris. When the My Unorthodox Life Season 2 trailer dropped more than a year later, Miriam shared more about their relationship, too: “I met Nathalie through a dating app,” she says in one scene, admitting, “I was just looking for sex, but I found love.”

The second season follows the Stanford University grad as she navigates her first committed relationship with a woman. “I am currently dating Nathalie Ulander, a Swedish tennis player living in New York,” Miriam told New Scene magazine in January 2022. “We’ve been together for upwards of 9 months. I love her and feel elated when I’m with her. She’s my first long-term girlfriend and I relish our moments together.”

Explaining that she came out while in college, the 22 year old also opened up more about her journey to accepting her sexuality. “I always felt out of place in queer communities because I didn’t feel like I was ‘queer’ enough. Yes, I was attracted to all genders, but no I never watched RuPaul,” she continued. “What I have come to [recognize], is that there is no right way to be queer. To me, it isn’t even about being queer at all. It is simply about just being you. ... I want to break the stereotype of what it means to ‘be’ a lesbian. What it means to ‘be’ a bisexual.”

Filming My Unorthodox Life’s second season was uncharted territory for both of them — though Miriam had a bit more experience to her credit. “It was really fun, filming with my partner,” she recently told TheThings. “It was her first time filming a TV show, and I had done one season already, so I was able to give her as much of an inside scoop as I possibly could, and we saw it as an adventure.”

Added Miriam, “We took advantage of the opportunity as much as we could and made sure that we were always comfortable with everything that came out in the show.”

After going public with their relationship, the duo documented their romance on social media, celebrating their one-year anniversary on March 24 and taking a trip to Venice in June. However, it seems the couple might have broken up around that time, too, as Nathalie stopped appearing in Miriam’s photos. In the comments of a June 20 Instagram post, a follower asked Miriam if she was “single now,” to which she replied, “Yep!” Then, on July 8, she also posted a TikTok with the caption, “I know these two broke up and it’s hard to believe in love, but the most important love that we need to have is self love.”

Though their dating status today isn’t entirely clear, Miriam and Nathalie at least appear to be on good terms. In addition to the fact that they haven’t deleted their photos together (and still follow each other), they also attended the New York City My Unorthodox Life Season 2 premiere in the same group and tagged each other in their Instagram Stories.

More like this
Here’s What Happens To Bill & Frank In 'The Last Of Us' Video Game
By Brad Witter
All The Clues About Aly & Zach’s Relationship Status After 'The Bachelor'
By Brad Witter
Love Is Blind’s Natalie Claims Shayne Signed Up For 'Perfect Match' While They Were “Still Together”
By Brad Witter
Mack & Domynique Reportedly Had An "Epic" Breakup On 'Married At First Sight'
By Brad Witter
Get Even More From Bustle — Sign Up For The Newsletter
From hair trends to relationship advice, our daily newsletter has everything you need to sound like a person who’s on TikTok, even if you aren’t.