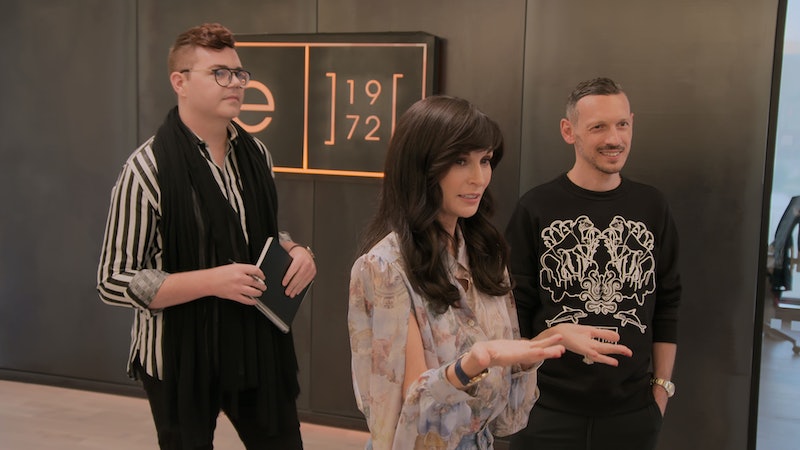 Netflix’s new reality series My Unorthodox Life follows Julia Haart, a fashion mogul who spent the first 42 years of her life living in an ultra-Orthodox Jewish community. As she got older, Haart grew uncomfortable with the community’s strict, conservative values — and in particular, watching her free-spirited daughter Miriam be forced to adhere to the same rules that she was. In 2012, she decided to leave the community and launch a luxury shoe brand that kickstarted her career in fashion. The transition was far from easy. “I’d had no radio, no television, no newspapers, no magazines. I’d never been to a bar. I’d never been on a date. I’d never slept in a room on my own. I felt like I was a Martian stepping on earth,” Haart, who is now the CEO of modeling and talent conglomerate Elite World Group, told the New York Times in a recent interview.

The Orthodox Jewish community that Julia Haart and her family used to be a part of is called Yeshivishe Heimishe and is located in Monsey, New York — just a bit north of New York City, where the family now lives. Monsey is located in Rockland County, which has the largest Jewish population per capita in all of the U.S. after Orthodox Jewish families seeking more affordable living spaces left the city in the 1950s.

For years, Haart barely discussed the first four decades of her life. “If guys would ask about my past, I would literally make [expletive] up. I didn’t want people to know my story. I didn’t want to be a victim,” Haart told the Times. “But after my first collection [at Italian brand La Perla], I thought, I’ve accomplished a little something. I had come to a place of personal comfort. And I hoped that someone would watch this and say, OK, if this crazy bitch did it, I can do it.”

On Sept. 20, Haart confirmed during her appearance on The Ellen Show that Season 2 of My Unorthodox Life was greenlit. Her announcement was also corroborated by Variety and Deadline. Though an official release date has yet to be confirmed by Netflix, the streaming platform told Variety that the forthcoming season will have all the major F’s and more – “fashion, family, female empowerment, faith, fabulousness, and of course, Haart.”

Not only has Netflix released a handful of popular shows exploring the Orthodox Jewish experience from different perspectives, but the streaming platform has also rolled out an increasing number of reality shows in recent years. Some of the company’s biggest reality hits so far have been dating shows such as Love is Blind and Too Hot to Handle, but it’s also found success with reality series more similar to My Unorthodox Life, like Selling Sunset and Bling Empire.

Here’s what we know so far about Season 2.

The My Unorthodox Life Season 2 Cast

Season 2 of My Unorthodox Life will likely continue to document Haart’s life and family, which includes her husband Silvio Scaglia and her four children, daughters Batsheva and Miriam and sons Shlomo and Aron. The series also highlights Haart’s “right hand” Robert Brotherton, who is the COO of Elite Model World.

The My Unorthodox Life Season 2 Plot

Season 1 explores Batsheva’s social media career and relationship with her husband Ben; Robert’s journey to find his biological mother; Julia’s struggles to integrate Aron more into the modern world; and both Shlomo and Miriam’s dating lives and professional endeavors. The end of the season wraps things up pretty neatly, but Season 2 will likely explore any new developments in their lives, particularly as Julia’s children strive to be more involved in her company.

There should also be more amazing fashion and a look at how the Haarts have continued to navigate their unorthodox lives. For Julia, Miriam and Batsheva, viewers may also bear witness to seeing their growth as empowered women in the world of fashion and beyond.

A premiere date for Season 2 of My Unorthodox Life has not yet been announced, nor has a trailer been released, but this piece will be updated as more information becomes available.

More like this
'Love Is Blind: After The Altar' Season 3 Has A Release Date & It's Very Soon
By Grace Wehniainen
The 'Freeridge' Cast Shared Their Hopes For A Potential Season 2
By Grace Wehniainen
Love Is Blind’s Natalie Claims Shayne Signed Up For 'Perfect Match' While They Were “Still Together”
By Brad Witter
Everything To Know About 'The Real Housewives Ultimate Girls Trip' Season 4
By Jake Viswanath
Get Even More From Bustle — Sign Up For The Newsletter
From hair trends to relationship advice, our daily newsletter has everything you need to sound like a person who’s on TikTok, even if you aren’t.

This article was originally published on July 14, 2021