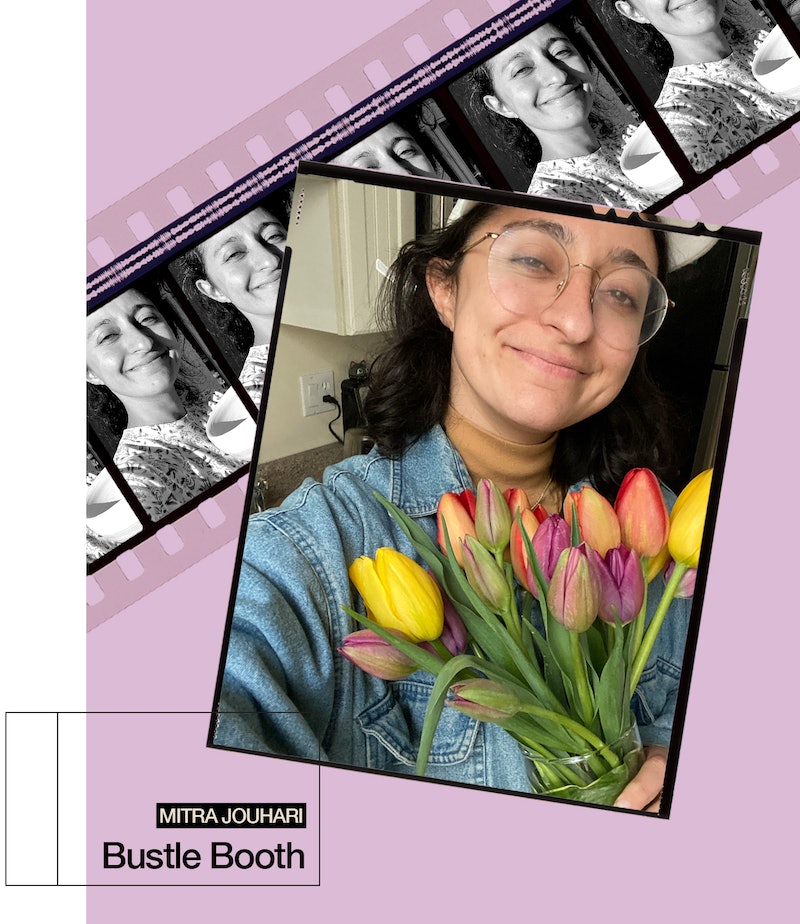 Don’t think for a moment that just because Mitra Jouhari is an actor, comedian, and TV writer on the rise that she’s shy about telling an audience of hundreds about the time she shit herself in a Party City. In fact, Jouhari would argue that it is her duty to openly discuss bodily fluids onstage. “I think I feel in my element when I am being disgusting but also honest,” Jouhari tells Bustle. “Either you’re laughing at me for being gross, or maybe you’re laughing with me because you’re gross too.”

Jouhari didn’t always think of herself as a comedian. “It’s that classic story of being one of the few ethnic girls in my school and trying to muscle through that using humor,” the Ohio native says. In high school, she was much more interested in being taken seriously as a Shakespearean actor — until she found improv comedy in college. “It became very hard for me to care about other stuff,” says Jouhari of finding her passion. She eventually dropped out of school and landed a job as a writer's assistant on Full Frontal with Samantha Bee. It was there that Jouhari honed the art of pitching her ideas to a room full of writers. “It spared me some percentage of insecurity,” she says of the experience. “I just felt very, very supported. I [felt] very safe to ask questions and not worry about someone thinking I was stupid because I haven't studied screenwriting or gone to a fancy school.”

Now, Jouhari has written for a slew of beloved shows including High Maintenance, Big Mouth, and Human Resources. As an actor, she has the ability to turn a single line of dialogue into a memorable moment, bringing her chaotic energy to shows like Friends From College, Search Party, Broad City, Abbott Elementary, and many more. She also harnesses that energy on Three Busy Debras, the web series turned Amy Poehler-produced show she co-created alongside Sandy Honig and Alyssa Stonoha that’s now in its second season on Adult Swim.

Meanwhile, there’s her upcoming set at the Netflix Is A Joke Festival in LA to attend to. “This is the most that I have ever talked about anything that could be described as ‘real,” Jouhari says of her new material. “I am really hesitant to share any actual emotional information about myself because I like keeping that stuff close.” But like her uncontrollable release of bodily fluid at a certain party store, Jouhari is now letting her emotional vulnerability rip.

Get to know more about Jouhari — including her favorite Real Housewives city — in her Bustle Booth questionnaire below.

“Weeee need your help.” It’s from Galaxy Quest. It was in the trailer and Enrico Colantoni’s delivery has stayed with me for literally decades. I love that movie SO much and I love the aliens especially.

Every single Real Housewives city. Potomac is my fave but I watch all of them.

I love Broadway divas. Many of them seem to exist in their own universe and I celebrate that.

I would like to be an editor on a Real Housewives show. Or a contestant on The Great Pottery Throwdown. I don’t think I would do well, but I love the show. I tried to visit the building where it’s filmed when I was in the UK but it was closed because of COVID. Next time.

I’ve been re-watching Miyazaki movies. I love the nature scenes. Loving, patient, tender. I have been watching Kiarostami movies for the first time and loving them.

That I’m warm. And that I could have easily pursued a career as a supermodel if I wasn’t sooooo devoted to writing and acting.