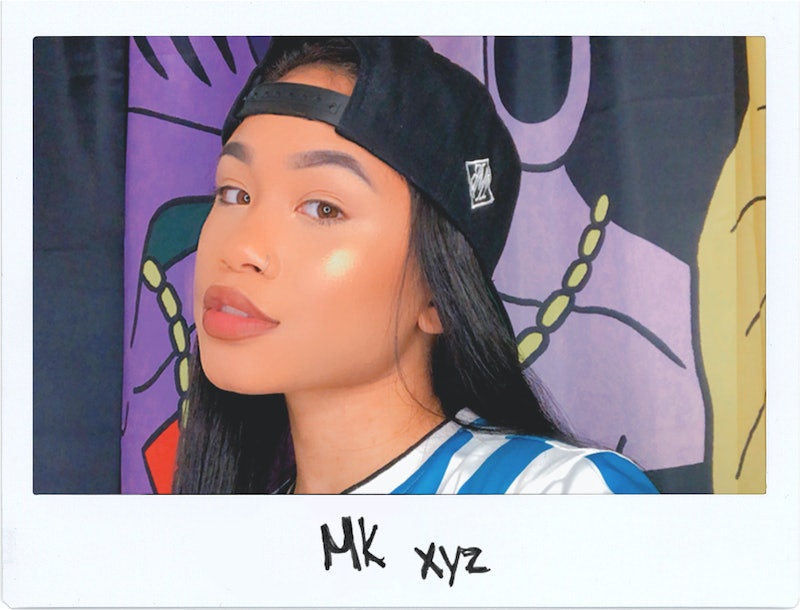 When celebrities (virtually) hang out with Bustle writers, we want to give them the chance to leave their mark. Literally. So we hand them a pen, a piece of paper, a few questions, and ask them to get creative. This time, rising R&B singer MK XYZ is leaving her mark in the Bustle Booth.

For artists looking to get their voices heard, social media can be a make or break tool. But few up-and-comers have had as much success on Instagram as 22-year-old singer/songwriter MK XYZ, who is making waves with her new single “Pass It” ft. G-Eazy. After the Florida native born Makaila Garcia started uploading covers of songs like Beyoncé's "All Night" on the platform, it was only a matter of time before the music industry slid right into her DMs.

In early 2019, Grammy-winning record producer Tricky Stewart — who’s worked with stars like Beyoncé, Rihanna, and Justin Bieber — messaged her on Instagram: “We can make magic together.” “I thought it was a sign,” MK XYZ tells Bustle. "It was just a gut feeling when you can tell that someone really sees the potential.” She traveled to Stewart’s Atlanta studio, where she was introduced to Epic Records CEO Sylvia Rhone. The meeting would eventually lead to a record deal.

MK XYZ’s breakout single “Pass It” was recorded in Las Vegas following her 21st birthday festivities last May. She worked with producers Hitmaka and Prince Chrishan, who between them have collaborated with everyone from Nicki Minaj to Teyana Taylor to Drake. “I told them, ‘Yo I need all the West Coast energy.' And we need to add someone to give it that flavor,” she says of her decision to team up with Oakland native G-Eazy. The resulting single balances MK XYZ’s feminine and masculine traits, through the Aaliyah-inspired clothing she wears in the video and her “come hither” lyricism. This duality is a reflection of her queer identity.

“There definitely have to be women [in the music industry] that represent what [women] today look like,” she explains of the contemporary and complex portrait of womanhood she strives to portray in her work. “I always go back to honor history, whether it’s women's rights, LGBTQ rights, or civil rights. I make sure that, from an intersectional standpoint, it’s not exploited — but strongly represented."

The singer stands proudly in her sexuality but isn’t looking for validation — hence her artist name. “‘XYZ’ represents all the unique parts of me that I just refuse to put a label on,” she says. “But it’s also a community for others who feel the same exact way. So the X, Y, and Z are super inclusive.” And as she gears up for the releases of a Lil Baby collaboration and her debut album Sweet Spot later this year, she remains as dedicated as ever to making music that creates a “safe space for different communities to feel heard, represented, and unified."

What are your all-time favorite song lyrics?

Draw 3 emojis that describe how you're feeling right now: