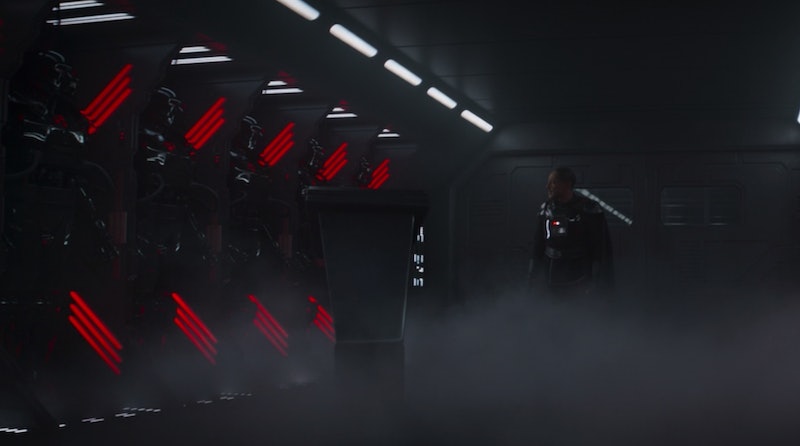 Spoilers ahead for The Mandalorian Chapter 12. Fans have known Moff Gideon survived his TIE fighter crash since Mandalorian's Season 1 finale, when he cut himself out of the wreckage of his ship with the mysterious Darksaber. But it's not until the end of Season 2's Chapter 12 that Mando, too, learns his formidable Empire foe is still alive, making his quest to bring The Child back to the Jedi even more urgent than before.

In the last few minutes of the episode, an officer is shown reporting to Moff Gideon, who is standing in a lab filled with rows and rows of what appear to be the first live-action version of either the Dark Trooper or Shadow Trooper suits, which have so far only appeared in video games in the Star Wars universe.

As reported by GamesRadar+, these suits first appeared in the obscure 1995 Star Wars video game "Dark Forces," in which the Empire used the Dark Trooper project to attempt to create a legion of "highly skilled droid soldiers." Some of these Dark Troopers even had exoskeletons that could damage Beskar Iron (the metal used to forge Mandalorian armor) and be used to wield the Force. Later, these same designs influenced the Shadow Troopers uniforms seen in "The Force Unleashed" and the "Battlefront" Star Wars video games. If these new troopers are anything like their video game versions, Mando could be in for some real trouble.

Though it's impossible to know exactly what Moff Gideon's plans are for the Dark Trooper/Shadow Trooper suits, this episode gives viewers a few more pieces of the puzzle. Mando's brief stop on the planet Nevarro to get his ship fixed leads to him — along with Cara Dune, Greef Karga, and the Mythrol man who Mando captured in the first episode of the series — discovering an Empire-run lab that appears to be using Baby Yoda's blood for some sort of experiment, likely related to his Force sensitivity. Between that and the fact that Gideon seems to be building a new army of Troopers, it seems likely that he's attempting to create an army of supersoldiers. Yikes.

The end of the episode also reveals that while the Razor Crest was being repaired on Nevarro, a worker hired by Moff Gideon planted a tracking beacon in the ship, allowing the villain to track our beloved protagonist and the child in his care. Now Mando is off to find the Jedis, following the lead that Mandalorian leader Bo-Katan Kryze gave him in Chapter 11 — with no idea that his ship is being tracked by Moff Gideon and the remains of the Galactic Empire.

More like this
'Bridgerton' S3 Teases Exciting Social Season For Penelope Featherington
By Bustle
The First Trailer For 'That '90s Show' Includes So Many Nods To The Original Series
By Jack Irvin, Alyssa Lapid and Grace Wehniainen
Twitter Is Very Torn About The Winner Of 'Dancing With The Stars' Season 31
By Jake Viswanath
What Jen Shah's Delayed Sentencing Could Mean For The 'RHOSLC' Season 3 Reunion
By Brad Witter and Jake Viswanath
Get Even More From Bustle — Sign Up For The Newsletter