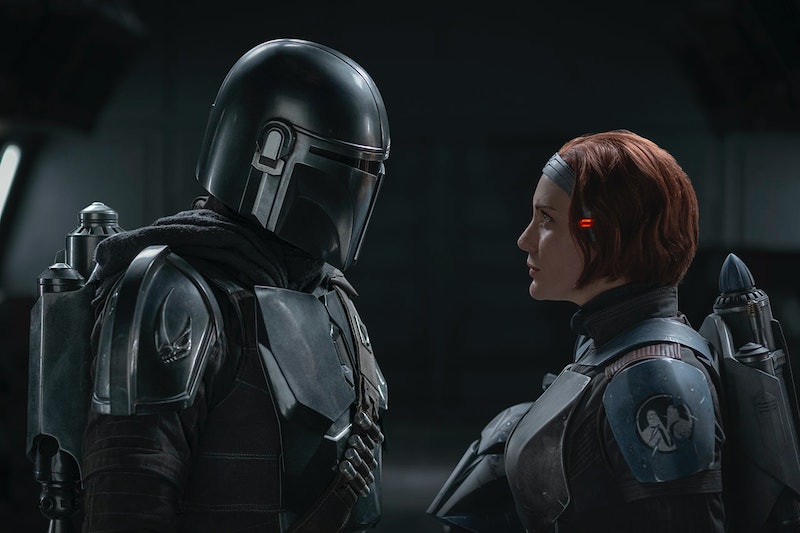 Chapter 11 of The Mandalorian finally addressed one of the biggest Star Wars plot holes in the show. Up until this point, protagnoist Din Djarin has made a pretty big deal about the fact that Mandalorians never take off their helmets in front of anyone. He's only done so once to date, in last season's finale, and it was literally to save his own life. But Mandalorians in other Star Wars properties, like The Clone Wars and Rebels TV shows, often removed their helmets. So what gives? As it turns out, our pal Mando belongs to a mysterious group called the Children of the Watch, and that's why he never takes off his headgear.

In Chapter 11, Bo-Katan Kryze — a Mandalorian leader who first appeared in animated form in The Clone Wars — made her live-action debut alongside two other previously unknown Mandalorians. One of the first things Bo-Katan and her fellow Mandos did was remove their helmets in front of Din, causing him to predictably freak out. It was at this point that Bo-Katan informed Baby Yoda's manny that he's not an average Mandalorian, but a member of a cult of religious zealots — a fact of which he seemed unaware. This group, the Children of the Watch, believes that the old Mandalorian ways of doing things should be the only way, which is why they follow such strict rules and codes. Kinda gives that whole "This is the way" mantra a different feel, doesn't it?

Because the Children of the Watch have never been mentioned in Star Wars lore outside of The Mandalorian, there's not a whole lot else we know about them. In addition to Mando, the Armorer and the other Mandalorians who rescued him from the bounty hunter attack in Season 1 all appear to be members, and there are some theories floating around that suggest the group is related to the Death Watch, another Mandalorian sect with the stated goal of preserving their culture's heritage. Specifically, they want to keep Mandalorians as a warrior race, but they seem a lot less extreme and cult-like than the Children of the Watch. They're also allowed to take off their helmets, so there's clearly some disconnect between the two groups.

Fans should expect learn more about the Children of the Watch as The Mandalorian Season 2 plays out. But for now, all we can really say is that there is apparently more than one way to be a Mandalorian.