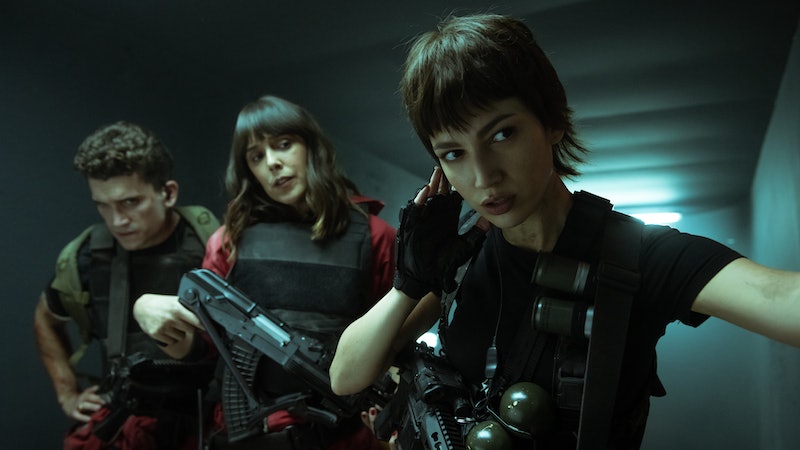 Five seasons after its premiere in 2017, the popular Spanish crime drama Money Heist (also known as La Casa de Papel) is coming to an end. The award-winning Netflix series follows a crew of robbers through two different high-stakes heists—the first at the Royal Mint of Spain, and the second at the Bank of Spain — neither of which go according to plan. Now entering its final season, the show faces the challenge of how to wrap up its characters’ stories — and knowing Money Heist, it’ll end with a bang.

“We’ve spent almost a year thinking about how to break up the band. How to put the Professor on the ropes. How to get into situations that are irreversible for many characters,” Money Heist creator and showrunner Alex Pina said in a statement about the series’ final season. “The result is the fifth part of La Casa de Papel. The war reaches its most extreme and savage levels, but it is also the most epic and exciting season.”

Volume 1 of Season 5, which contains 10 episodes, premieres on Sept. 3. The second and final installment, which includes the last five episodes of the series, hits Netflix on Dec. 3. Here’s everything else know about Money Heist’s final chapter.

According to Netflix’s official synopsis, the start of Season 5 finds the crew in the grimmest situation they’ve faced yet: stuck in the Bank of Spain with an army waiting to attack. On top of that, the Professor has been captured, and even he doesn’t appear to have a way out of their mess.

Similar to many other shows, production on Season 5 of Money Heist faced setbacks amid the coronavirus pandemic, but Pina said those obstacles challenged them to think of something unexpected for the final part of the series. “In Volume 2, we focus more on the emotional situation of the characters. It is a journey across their sentimental map that connects us directly to their departure,” he said in a release.

Pina has also teased that Money Heist could continue in other formats. “We do have many possibilities for some spinoffs, and I think that's thanks to the strong and powerful identities of the characters,” he told Oprah Daily in August. “We’ve always looked for characters to have a very complex, layered design. So I think almost every character of Money Heist has a duality that we would like to see in a spinoff. We could watch any of them in other contexts.”

Though much of the Money Heist main cast is set to return for Season 5, it’s hard to say which of them will appear in Volume 2. The show has proven it has no qualms about killing off characters, even beloved ones, so not everyone may make it out alive of Volume 1.

In addition to the main cast, Money Heist Season 5 introduces actor Miguel Ángel Silvestre as René, a former love interest of Tokyo’s who was killed during a robbery prior to the events of the series. Patrick Criado, another newcomer to the show, will play the secret son of late former crew member Berlin.

A trailer for Money Heist Part 5 Volume 2 has not yet been released, but this post will be updated as more information becomes available.