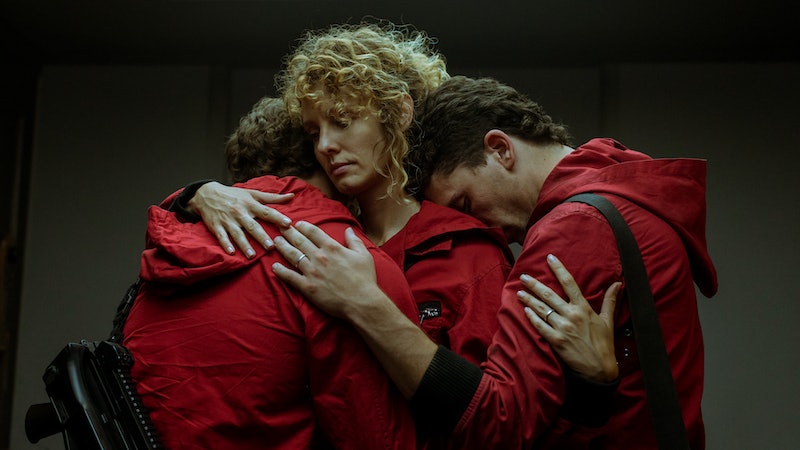 Since premiering in May 2017, Money Heist (known in Spanish as La Casa de Papel) has been a hit — both in its home country of Spain and here in the States. For many viewers, the thrilling drama served as an especially welcome distraction during the early days of the pandemic, with Season 4 premiering on April 3, 2020. Like the entire entertainment industry, Money Heist was affected by COVID in a big way. Not only did the virus put production on hold (according to BLUPER, Money Heist was originally supposed to film Seasons 5 and 6 back-to-back in early 2020), but it also personally impacted at least one cast member.

Itziar Ituño, who plays Raquel Murillo on the series, tested positive for COVID-19 last spring, according to Oprah Magazine. "I've had the symptoms since Friday afternoon, and today we got the test results which came back positive," she explained in a March 18 Instagram originally written in Spanish, Portuguese, and Basque. She assured fans that she had a mild case of the virus and cautioned others to take it seriously. "Do not take it lightly, there are lives at stake and we still do not know how far this will go," Ituño reportedly wrote.

Fortunately, Ituño is OK today — and Money Heist is, too. Netflix recently announced the return of the award-winning show for two more installments, the first of which will be arriving sooner than you might think. Here is everything we know about Money Heist Season 5 so far.

As announced by Netflix, Money Heist's fifth and final installment will be split into two, five-episode halves. The first part of Money Heist Season 5 premieres on September 3, and the second on December 3. It’s been a long wait for more Money Heist, but at least you won’t need to wait too long between the last two entries (which, knowing the drama of this show, could very well be separated by a major cliffhanger).

“The gang has been shut in the Bank of Spain for over 100 hours. They have managed to rescue Lisbon, but their darkest moment is upon them after losing one of their own. The Professor has been captured by Sierra and, for the first time, doesn’t have an escape plan. Just when it seems like nothing else could go wrong, an enemy comes on the scene that is much more powerful than any they’ve faced: the army. The end of the greatest heist in history is approaching, and what began as a robbery will turn into a war.”

In the same release, Money Heist creator Álex Pina discussed the obstacles and opportunities presented by scribing Season 5 during the pandemic. “We felt that we had to change what was expected from the 10-episode season ... to create the sensation of a season finale or series finale in the first volume itself,” he said. “In Volume 2, we focus more on the emotional situation of the characters. It is a journey across their sentimental map that connects us directly to their departure.”

So, fortunately, it seems like the second half could be the closure longtime Money Heist fans need after what is sure to be a roller-coaster Volume 1.

The date announcement video for Money Heist Season 5, shared by Netflix on May 24, teased a high-stakes final fight — set to a very haunting cover of Linkin Park’s “In the End,” which, as several YouTube comments pointed out, doesn’t bode great for the beloved characters. An official trailer will likely follow in the coming months.

This post will be updated with the trailer and additional details as more information on Money Heist Season 5 becomes available.

More like this
'Bridgerton' S3 Teases Exciting Social Season For Penelope Featherington
By Bustle
The First Trailer For 'That '90s Show' Includes So Many Nods To The Original Series
By Jack Irvin, Alyssa Lapid and Grace Wehniainen
The ‘Emily In Paris’ Season 3 Trailer Teases Major Career & Love Crossroads For Emily
By Bustle Staff
It May Be A While Before 'All American' Season 5 Drops On Netflix
By Grace Wehniainen
Get Even More From Bustle — Sign Up For The Newsletter