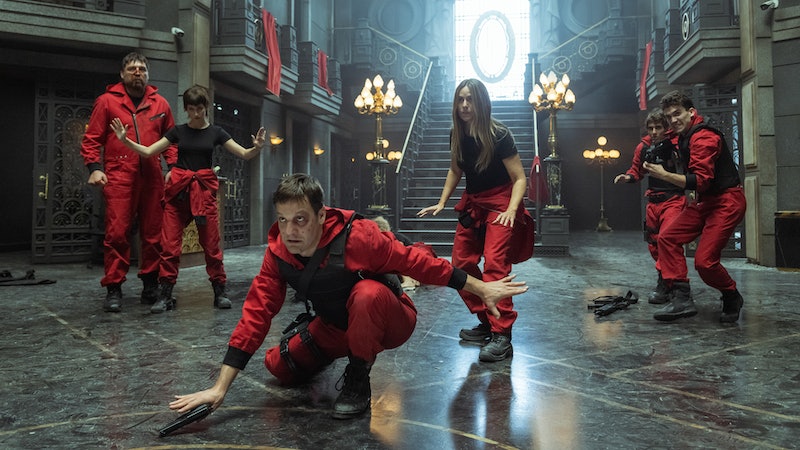 After five seasons of high-stakes finance and emotional drama, Money Heist (known in Spanish as La Casa de Papel) is coming to an end with Season 5, Part 2, premiering Dec. 3 on Netflix.

“The script writers were absolutely insatiable,” Pedro Alonso, who plays Berlin, said during an interview with Esquire Middle East. “At the beginning, they thought, ‘Well, let’s make a heist story.’ But that wasn’t enough. Then they said, ‘Well, let’s make it a police story.’ This wasn’t enough, either. And then the fifth season, they made it a war story. They try to find stimuli to make the characters fly. It’s an attempt at constant renewal, so that nothing ever gets stale.”

Money Heist creator and showrunner Alex Pina was known for writing and re-writing the show as it was being filmed, sometimes changing the plot so significantly that even the actors didn’t know what was going on. “You have no idea what’s happening,” Luka Peros, who plays Marseille, explained to Esquire. “When you read it, you’re like, OK, maybe I die now. Will this character die, or will they kiss? And if they kiss, will a bomb go off immediately after? In this in this series, everything is possible.”

When approaching Season 5, Pina and the team were determined to write an ending that did justice to the characters and stories they’ve spent years developing. “In the case of the fifth part, what happened in the final chapters is that what we had designed didn’t really work and we had to radically change the last chapter,” Pina told Esquire Middle East in August. “In other words, we changed everything we had in mind about how the robbery ended because it was not working for us.” He ultimately re-wrote the ending 33 times.

“I believe that the fifth season is the most brutal from any other we have done – for many reasons, mainly due to the levels we came to harass the Professor’s band, our most radical limits are in this fifth season,” Pina continued. “This also allows us to blow everything up into big pieces, the things we had previously done allowed us to blow them up. It has really been difficult for us to finish it like this but, on the other hand, it is rewarding that the series is getting proper closure with its best season so far.”

For the Money Heist cast, a number of whom have been on the show since its first season in 2017, getting to the end of their character’s journeys was emotional. “I cried. I'm a big crier,” Úrsula Corberó, who plays Tokyo, said of her reaction to receiving her final script. “I remember that I sent a picture of me weeping to Álex Pina, and I was not so much crying because it was the last plot, but rather because I knew that that was the last script.”

In an earlier conversation with Oprah Daily, Pina hinted that a potential Money Heist spinoff could place one of the characters from the original show in a different context. Afterward, Pina told Esquire that he didn’t currently have any plans to continue Money Heist. But he also doesn’t seem opposed to the idea — leaving open the possibility that this isn’t the last we’ll see of the team of thieves.