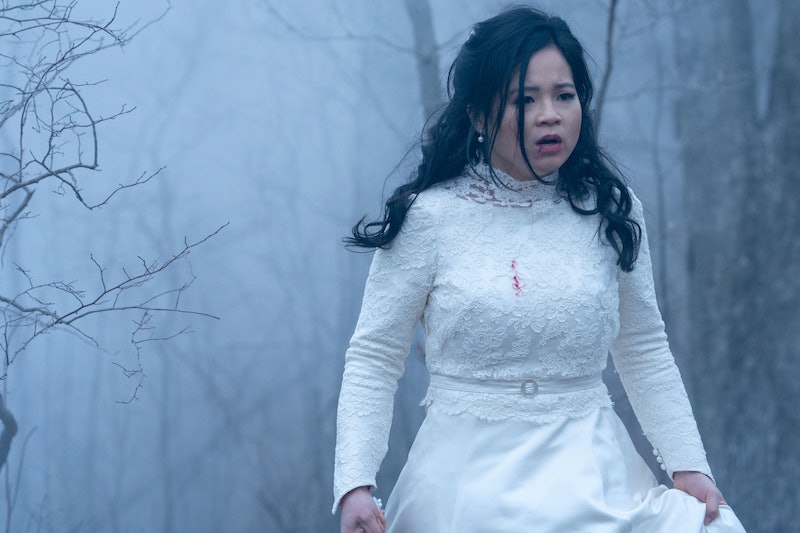 Mermaids, fallen angels, and strange beasts lurk in Hulu's new anthology series Monsterland. Based on Nathan Ballingrud’s 2013 collection of short stories, North American Lake Monsters, the show centers on desperate people trying to fix their lives. They're brought to life by the rotating Monsterland cast, which includes actors from Orange is the New Black, Star Wars, and Westworld among others.

Series creator Mary Laws told Entertainment Weekly that the show isn't what you'd think of as traditional horror, because it takes a hard look at the line between monster and human. "[Today] people are being trained to be a little less forgiving of other people’s humanity," Laws said. "I think it’s really important to recognize that people are people and you can do really monstrous, really horrible things and still be human."

Each episode explores a spooky happening in a different city. In Episode 1, for example, Kaitlyn Dever plays a teen mom in Port Fourchon, Louisiana who meets a creepy man at the diner she's waitressing at. "I was really excited to play a mom for the first time," Dever, who's best known for her work in Booksmart and Netflix's Unbelievable, told Entertainment Weekly of her character. "I think I had these preconceived notions of what a mom is supposed to be like, but there’s so many different types of mothers in the world, and they’re all going through different things. This episode was the biggest learning curve of my career."

In another episode, Nicole Beharie (Miss Juneteenth, Little Fires Everywhere) stars as Annie, a New Orleans socialite with a haunting past. Her story is a sorrowful portrait of abuse and complicity that has an interesting supernatural twist, which is fitting for Beharie, who led the equally supernatural Sleepy Hollow. She stars alongside Hamish Linklater, who's known for his work in the mind-bending Legion.

As for the rest of the cast, fans of Orange is the New Black will quickly recognize Taylor Schilling in the "Plainfield, IL" episode as a suburban lawyer struggling with issues of depression and suicidal ideation. The consistently under-appreciated Trieu Tran, who played Mr. Leung in Altered Carbon, stars in his own mermaid-centric episode about issues of Asian immigration and assimilation. And others will spot Luke Cage's Mike Colter in "Newark, NJ," as well as actors like Westworld's Jonathan Tucker and Ozark's Charlie Tahan.

But it's really Kelly Marie Tran who steals the show. Known for her work as Rose Tico in the new Star Wars trilogy, Tran stars in "Iron River, MI" — the standout episode of the season — as Lauren, a neglected daughter longing for another life. Playing the part was "like a weird fever dream,” Tran said at PaleyFest 2020. "The subject matter of privilege and the intricacies of jealousy and envy and what happens when we let these animalistic human instincts do their thing was really compelling to me," she explained. "This is something I've probably just dealt with in my life. What would I do if I could have someone else's life?"

Ultimately, Monsterland is meant to showcase people who you don't often see in the horror genre: in particular, people of color, women, and those living in poverty, Laws told Syfy. "[Nathan Ballingrud] writes about protagonists that normally wouldn't make the headlines,” the showrunner explained. “They wouldn't make it on screen because they're blue-collar people. They're teenagers that are lonely and misguided. They're really complex, complicated women who make a lot of bad choices. They're not your average Hollywood star or protagonist. And that's what I wanted to make space for."