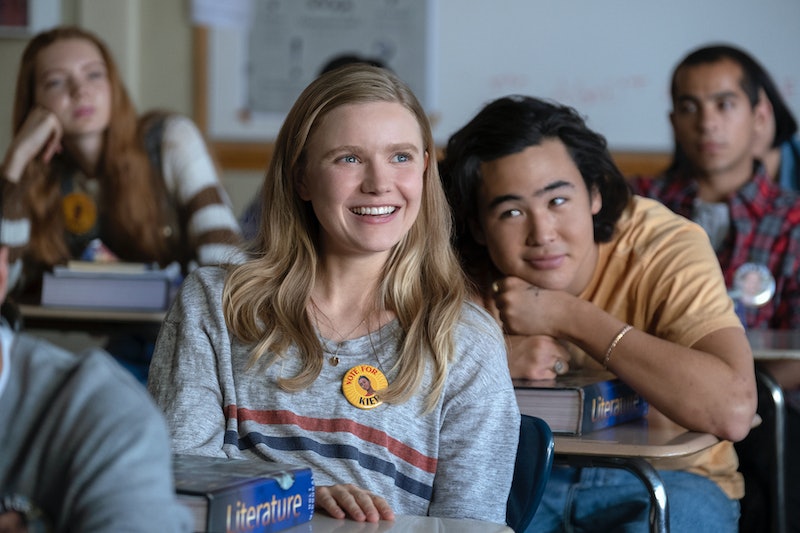 Streaming on March 3, Netflix's new movie Moxie is based on Jennifer Mathieu's book about one girl's revival of '90s 'zine culture in her small-town high school. Directed by Amy Poehler — who also co-stars as a pivotal character — Moxie is coming to smash the patriarchy. Here's what you can expect from the comedy-drama film. Major spoilers for Moxie follow.

Set in East Rockport, Texas, a tiny town where life revolves around high school football, Mathieu's 2017 novel centers on Vivian Carter, a 16-year-old student whose patience for her school's rampant racism and misogyny has finally worn thin. Tired of being assaulted in the hallways, ranked on lists of the "most f*ckable" girls in school, and sent home for dress code violations, Viv — who has always been nice and quiet and has never made waves — takes a page out of her riot Grrrl mother, Lisa's, book and starts an anonymous 'zine, titled Moxie, for her fellow girls.

When Moxie turns out to be a hit, Viv watches as her classmates begin to resist the administration's tacit approval of the male students' disruptive and violent behavior, but they're fighting an uphill battle. The boys' sexist ringleader, Mitchell, just so happens to be the school principal's son and the football team's star quarterback. No one's going to punish him or his friends, regardless of what they do — up to and including sexually assaulting girls on school property.

The East Rockport High School boys have a "game," the bump 'n' grab, which consists of knocking a girl off-balance and then feeling her up, snapping her bra strap, grabbing her around the waist... whatever they can do to make their victims feel powerless. When Mitchell "pins [Viv's BFF Claudia] up against the wall and... slides his hand up [her] shirt," she reports the incident to an assistant principal, who refuses to take Mitchell's behavior seriously and downplays her trauma. From the novel:

"He looked at me and told me that Mitchell was probably just joking and that I should take the break to relax and forget about it," Claudia answers. She's not crying anymore. She's just still. Mad. "And then he said I should probably take it as a compliment."

Things come to a head in short order, when an anonymous flyer circulates accusing Mitchell of an attempted rape and his father of covering it up. The handout asks students to participate in a walkout to protest the way the school administration "tolerate[s] violence against girls."

Naturally, East Rockport High School tries to do all it can to nip the student demonstration in the bud, but hundreds of girls — and a few of the boys — march out of the school all the same. As the principal and his toadies try to root out Moxie's founders and threaten them with expulsion, a popular cheerleader named Emma reveals herself to be the creator of the anonymous flyer. When Viv steps forward to claim responsibility for the 'zine and take some of the heat off Emma, a dozen or more girls in the crowd do the same.

When the dust settles, the school's corrupt principal is forced to resign and leave East Rockport for good, taking Mitchell with him. Several of his faculty co-conspirators follow, leaving Viv, Claudia, Emma, and the other girls to wait to see how the incoming administration will handle boys like Mitchell. That's OK, though. They have the whole summer to plan the next phase of the Moxie resistance movement.