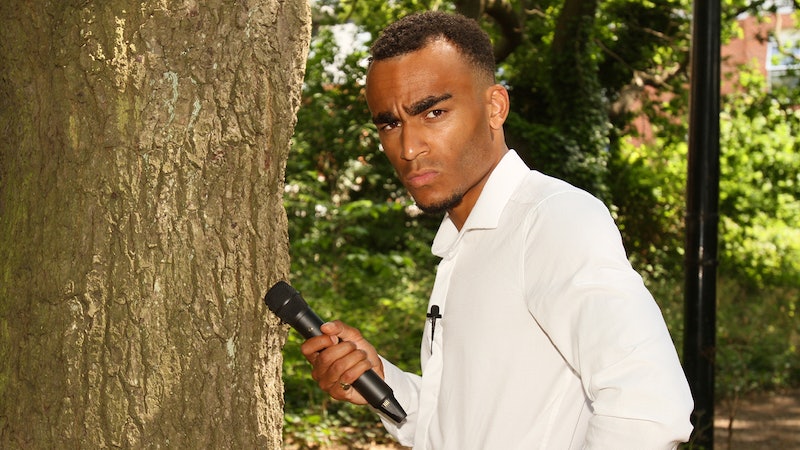 Courtesy of Get It Right

“If you don’t laugh, you’ll cry,” 27-year-old comedian Munya Chawawa says over our video chat. “If you acknowledge the crushing weight of inequality, which does exist and is all around us, as a Black person, you think, why do I even bother?” You might know Chawawa better as his characters: Barty Crease the news anchor; Johnny Oliver, Jamie Oliver’s brother; or Unknown P the posh drill rapper. Since Chawawa’s internet sketches blew up over lockdown, he’s become an important voice for a younger generation in the UK, using comedy for political criticism, while providing some much-needed laughs during a global pandemic. Now, like Big Shaq, and Bafta winner Mo Gilligan before him, Chawawa’s career looks to be on the rise.

He first got into comedy at a young age, inspired by his “quick-witted” maternal grandfather. “I remember insisting on buying all these joke books as a kid, and then sitting in my room learning the jokes so that I could go toe-to-toe with him at the dinner table.” Starting out in TV and radio, writing for other people, Chawawa soon realised he was giving up his best material.

“I was writing scripts for presenters and watching the jokes land and then I thought: Ok, maybe my writing has some comedy value.”

Growing up in Zimbabwe, before moving to “a very little village [in the UK] surrounded by upper-middle-class people” was a bit of a culture shock for Chawawa. And finding himself in the minority wasn’t easy. “I think it was quite lonely, not being able to have conversations or share jokes,” he says. “We weren't speaking the same language, metaphorically, of course.” He now lives in London, but growing up in this environment gave Chawawa the chance to observe the more “peculiar” mannerisms of the elite, which now inform his characters (Unknown P in particular). Is he worried people might recognise themselves? “I doubt that they even have time to go on Instagram amidst their croquet sessions and dog walking,” he quips.

For his character Barty Crease, a news anchor, his inspiration comes from the media, who he notes “using the same tactics every time when it comes to Black stories.” He riffs off the Black Lives Matter protests in one of his recent videos, where police horses were seen bolting through crowds, without riders – something that would be seriously scary for those attending. Yet, Chawawa manages to find comedy in the scenes: “A brown horse aggressively galloped through the streets,” Barty Crease says, deadpan. “A forensic investigation revealed that the horse was an active gang member of the Harlem Spartans.”

Chawawa tells me he created the Johnny Oliver persona after TV chef Jamie Oliver’s controversial rehash of jerk rice. In these sketches, he shines a light on Caribbean culture and appropriation, while doing high energy mock-dance moves. “I've actually sustained some injuries from being Johnny Oliver,” he adds.

While his sketches are laugh-out-loud hilarious, it's the focus on current affairs and politics that's clearly resonating with young people (each post is generating tens of thousands of views). “Our generation are very aware of the issues that are happening,” he agrees. “We're not going to pretend that young people only enjoy comedy where someone is doing something stupid or, you know, pranking somebody.”

Chawawa puts a lot of work in, too. “It can take me a day to come up with the concept and then a day of trying to execute it: finding locations, getting the angles correct, the editing, the music. And that's just for 60 seconds.” Behind the scenes, he says, “blood, sweat and tears go into it”. Which is where the Get It Right campaign comes in, a government-backed initiative, encouraging young people to support the content and creatives they love, by watching it on genuine sites.

With the comedic timing of he a true professional, Chawawa – an ambassador for the campaign – adds the catchphrase: “So, just make sure you get it right from a genuine site!”

For young people looking to get into comedy, Chawawa doesn’t believe it’s as simple as making a viral video, or being naturally funny. “Ultimately, making people laugh is an art form. It's something that you study,” he explains. “Obviously, try and find your own niche, but I think social media can give people the belief that it's enough to just have a big personality. Your career needs to start well before you go viral, so you have a portfolio.”

So, where does Chawawa see himself next? “I'm pretty confident to say that [I’ll have] something on television, something on Netflix, in the music world,” he says. “And the only thing that makes me say that is, I have no intention of stopping.”

Munya Chawawa is working with Get It Right, a government-backed campaign to encourage fans of TV, films, music, sports, games, and eBooks to get the content they love from genuine sites. Find out more at getitrightfromagenuinesite.org.