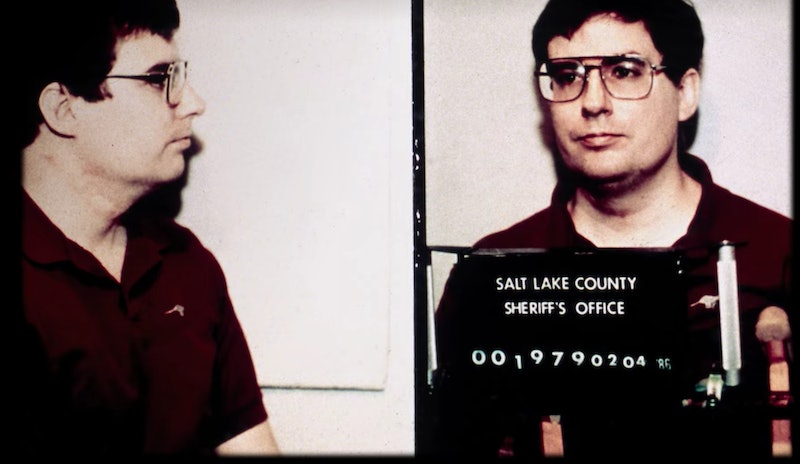 In just three episodes, Netflix's true crime series Murder Among the Mormons documents six years in the infamous life of churchgoer-turned-convicted murderer Mark Hofmann. Viewers learn how he started forging historical Mormon documents and selling them to the church and collectors, and how things took a turn when he planted bombs to cover up his fraudulent scheme. (Hofmann is currently serving a life sentence for second-degree murder after killing two people in the bombings.) The story is expansive, but the series is so succinct that there's little question of whether there will be a Season 2. Signs point to no; in fact, Netflix cut it down from what the filmmakers originally pitched.

Jared Hess, who co-directed Murder Among Mormons with Tyler Measom, told the Deseret News that they originally pitched a six-part series to Netflix. "We felt the story was too vast. There's so much incredibly fascinating material that we wanted to tell," Hess said. But Netflix wanted three parts, max. It was a tall order for the directors to cut the project down.

"We really had to kind of curate what were the most relevant moments and the biggest parts of the story that that were crucial to understand," Hess told the news outlet. "We also had to tell enough about the foundational beliefs of Mormonism to set them up for an audience so that they could understand and comprehend the impact of Mark Hofmann's forgeries."

Hess told the Salt Lake Tribune that ultimately shortening the series "actually helped the storytelling." Because Netflix already wanted fewer episodes, it's unlikely that the show will return for a second season. But if the series is popular enough, Hess and Measom could always try to take their leftover footage and research to another network or start a true crime podcast. Measom told the Tribune that they have so much that didn't make it in. "We only cover a smattering of the people that were fooled [by Hofmann]. The amount of archival materials that we had after four years of searching intently was quite astounding," Measom said.

Hess and Measom aren't the first people who tried to tell this story on screen, but they are among the only ones to be successful. Aside from a BBC documentary in 2003 and a handful of books, the Netflix series marks the first time these incidents have been revisited in a mainstream way. In 1988, right after Hofmann was convicted, the Los Angeles Times reported that there were several film projects in the works, including a four-part miniseries called The Mormon Murders and a movie called A Gathering of Saints. Neither project came to fruition. In 2016, Variety reported that the Gathering of Saints film project idea had been revived, but no progress has been made public since.

"I have a folder with literally dozens and dozens of companies that tried to make this story, both narrative and documentary, from the '80s to the '90s to now," Measom told the Tribune.

Perhaps interest in Hofmann's story spurred by this Netflix series will lend support to those other projects. In the meantime, Hess told the Deseret News that he's already thinking of jumping back into the docuseries space. "I would love the chance to be able to do another true crime documentary series," he said. It just probably won't be one about Hofmann.

More like this
'The Queen’s Gambit' Season 2 Tweet Wasn’t From Anya Taylor-Joy
By Mary Kate McGrath, Jack Irvin and Grace Wehniainen
Netflix Shut Down 'Bridgerton' S3 Rumours About A “Very Dark” Storyline
By Bustle
Everything To Know About A Potential 'Lockwood & Co.' Season 2
By Gretchen Smail
Everything To Know About 'Cobra Kai' Season 6
By Brad Witter
Get Even More From Bustle — Sign Up For The Newsletter
From hair trends to relationship advice, our daily newsletter has everything you need to sound like a person who’s on TikTok, even if you aren’t.