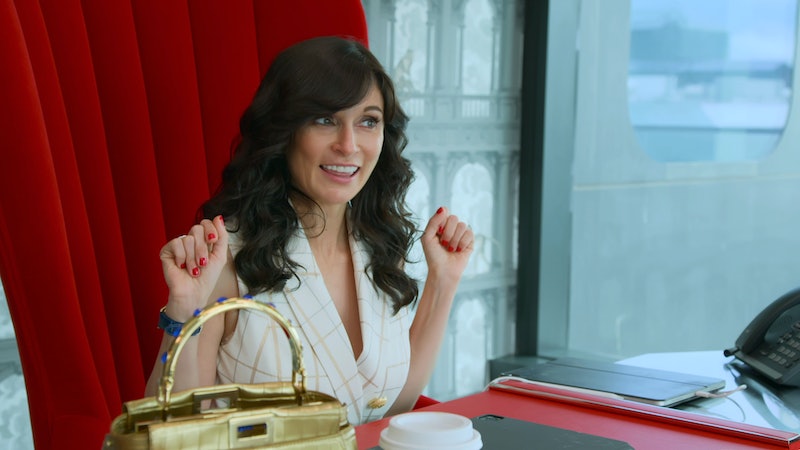 Netflix’s new reality series My Unorthodox Life documents the life and family of fashion mogul Julia Haart. A former member of an ultra-Orthodox Jewish community, she’s now the CEO of the model management agency Elite World Group. The show follows her and her four kids — a TikToker, an app designer, a lawyer, and a high schooler — as they navigate the differences between their orthodox upbringing and their current lifestyle. Here’s everything to know about Haart ahead of the show.

Haart was born in Russia, but her family moved when she was three, living in Italy, Austria, and Austin, Texas before settling in Monsey, New York when she was 7. There, she grew up in an Ultra-Orthodox, or Haredi, Jewish community that adheres to a very strict observance of traditional Jewish law and often seeks to limit outside, modern influences.

"My whole life I was forced to cover myself. So basically, the only parts of my body that were showing were my hands and my face," Haart told Entertainment Tonight. "It comes from this concept that women should cover their bodies so as not to attract male attention because [men] may come to have impure thoughts. And my personal take on this is, 'Why is that my problem? It's not.'"

Per People, Haart was devout for years, but grew uncomfortable with her community’s strict practices as her kids got older. In particular, she hated seeing her daughter Miriam be forced to adhere to the same rules that she was. So she left in 2012. Haart has said that she’s still “a very spiritual person," and her “issue was never with Judaism. It was purely and solely with fundamentalism."

After leaving her community, Haart launched a shoe company, Julia Haart Inc in 2013. “Before I even left, I had started the concept of the shoe brand. I taught myself to sew when I was 16,” she told The New York Times.

Per Forbes, Haart partnered with an Italian ski boot engineer and a German company that creates a gel used by NASA to create a comfortable high-heeled shoe. Her shoe line eventually caught the attention of the daughter of the owner of La Perla, a luxury lingerie brand. She was invited to collaborate with La Perla in 2016 for a collection, and became La Perla’s creative director in May 2016.

Haart used to be known as Talia Hendler, and per Kveller, she married Yosef Hendler when she was 19. According to a TikTok by Haart’s eldest daughter Batsheva, Hendler has since gotten engaged to another woman.

Haart is now married to Italian tech entrepreneur Silvio Scaglia. Per his website, he was born in 1958 in Lucerne, Switzerland. He graduated with a degree in electrical engineering and founded Fastweb, a telecommunications company, but sold his shares in the company in 2007 to become a billionaire. Per MSN, Scaglia is also the chairman of Haart’s Elite World Group.

In 2010, Scaglia was arrested for suspected tax evasion of more than 2 billion euros that were allegedly laundered through fake international phone service purchases and sales, per Reuters. He denied any wrongdoing and was acquitted in 2013.

According to Fashion United, Scaglia bought out La Perla and became chairman in 2013. As Haart told New York Times, he was La Perla’s CEO when they first met. “The first year of our interaction was me yelling at him,” she said. “I was horrible to him. But I had a lot of respect for him.”

She added to Forbes that while some people discredit her by saying she “just married a rich guy,” her business success came before she met Scaglia and “one thing had nothing to do with the other.”

Haart’s goal at La Perla was to create comfortable lingerie and sleepwear. “Women shouldn’t have to choose between beauty and comfort. We’re still suffering to make some dude look at us? It’s outrageous,” she told The New York Times. “My goal became: It has to feel like pajamas, even if it looks like glitz and glamour.” She said they used chiffons with stretch and Leavers lace.

In 2017, Haart designed Kendell Jenner’s Met Gala dress that used 85,000 crystals attached to a single nylon string. She later became the creative director of e1972, a customizable, luxury fashion brand launched by her company Elite World. “I wanted to take the things about fashion that bothered me and figure out how to change them,” Haart told Vogue. “And one of the things that really bothers me is sizing.” There’s no standard sizing for the e1972 clothes; instead, the app uses an at-home body scan that lets users calculate their own measurements. “I know people that won’t go into a store because they’re afraid the store won’t have their size or the item won’t fit,” Haart said. “That’s horrifying!”

My Unorthodox Life premieres on Netflix on July 14.