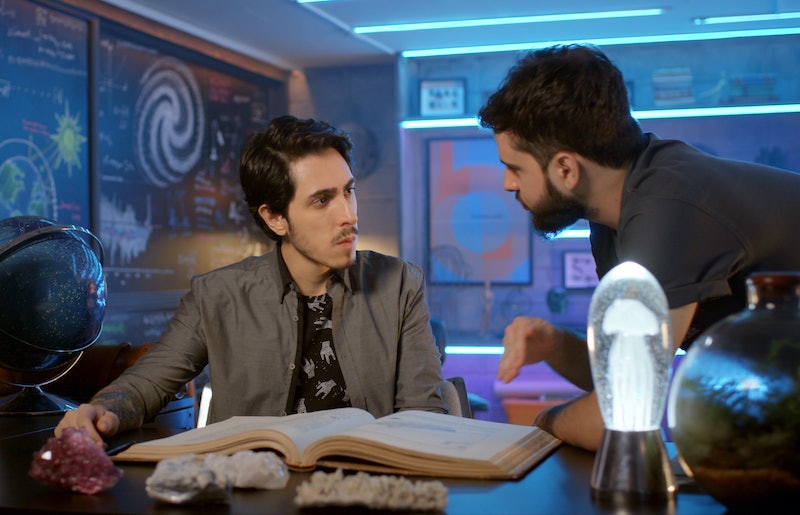 The new science reality show Mystery Lab (or Mundo Mistério in Portuguese) is basically the Brazilian equivalent to Down to Earth with Zac Efron. The series follows host Felipe Castanhari as he and his friends explore topics like the Bermuda Triangle, global warming, and time travel — all with a comedic bent. While there's no word on a Mystery Lab Season 2, Castanhari is on board. "I have many ideas," he told the Brazilian site UOL in a translated interview. "It would be a privilege to be able to do a second season."

Castanhari is a well-known Brazilian YouTuber, whose Canal Nostalgia publishes videos on themes like history, science, and pop culture — kind of like a millennial version of Hank Green's channel, "Crash Course." Castanhari started his channel in 2011, per Pequeñas Empresas & Grandes Negócios, when he wasn't able to find YouTube videos on the pop culture he grew up with. At the time, Castanhari was a 3D animator, so he was able to financially support himself until his channel took off — which it did.

Since then, Castanhari has created a huge back catalogue of videos, making him the perfect choice to host a show like Mystery Lab. In the series, he's joined by Lilian Regina (Dr. Thay), Bruno Miranda (Betinho), and Guilherme Briggs (an artificial intelligence called B.R.I.G.G.S.), who discuss the biggest mysteries of our world.

According to UOL, his main inspiration for Mystery Lab came from the American '90s series Beakman's World. "It was a program that I wanted to try to somehow bring back to the present day, because I no longer see these programs similar to Beakman's World, which talked about science and curiosities in the world in a fun way," Castanhari told the site.

The YouTuber worked on his Netflix show for the past two years, per the article, hiring researchers to help him explore different topics before developing the scripts with screenwriters Rob Gordon and Israel Mota. As the creator, screenwriter, producer, and director on the series, it's clear he's passionate about the subject matter. "It's a series that I believe in so much and I wanted to make sure that I was putting as much of myself as possible there in that series," he told UOL. "I love what I do, so for me it was very nice to be able to participate from the creation of the episode format, to editing others."

And since it was an extensive project to bring to the screen, it would likely take at least a year or two before Mystery Lab returns for Season 2. And if it doesn't, at least Castanhari still has his YouTube career.

More like this
'Love Is Blind: After The Altar' Season 3 Has A Release Date & It's Very Soon
By Grace Wehniainen
Love Is Blind’s Natalie Claims Shayne Signed Up For 'Perfect Match' While They Were “Still Together”
By Brad Witter
The 'Freeridge' Cast Shared Their Hopes For A Potential Season 2
By Grace Wehniainen
Netflix Shut Down 'Bridgerton' S3 Rumours About A “Very Dark” Storyline
By Bustle
Get Even More From Bustle — Sign Up For The Newsletter
From hair trends to relationship advice, our daily newsletter has everything you need to sound like a person who’s on TikTok, even if you aren’t.