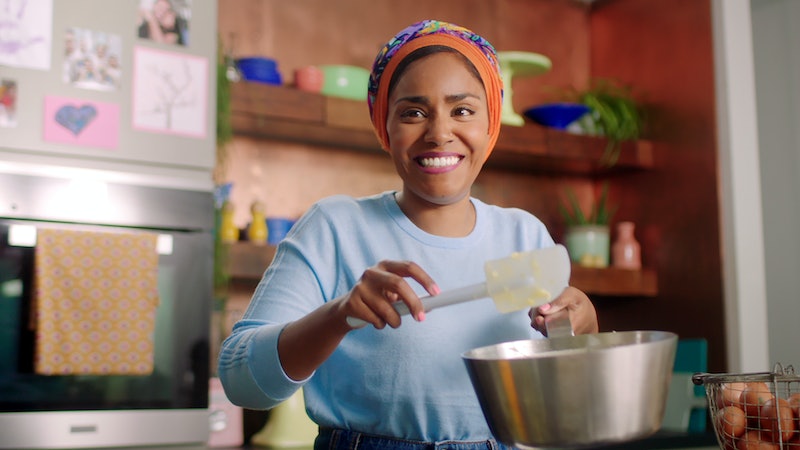 After icing out the competition in 2015, Great British Bakeoff winner Nadiya Hussain is back to grace our TV screens with her quips and bubbly personality. Based off her 2020 book by the same name, Nadiya Bakes follows Hussain as she prepares several of her favorite recipes. The show first aired in Sept. 2020 on BBC Two, and now American audiences can dive in to the eight episodes on Netflix.

Though BBC and Netflix have not announced if Nadiya Bakes will return for Season 2, the show will likely gain a lot of traction as we're all baking up a storm from the safety of our homes. Hussain herself told The Guardian that baking is a great way to escape the anxieties around the ongoing COVID-19 pandemic. “It’s the thing that gives me comfort when I’m suffering with anxiety, especially over lockdown,” she said. “Baking is the thing that allows you to focus, because you’ve got someone telling you exactly what you need to do and when you’re doing it." And, she added, "At the end of it you get cake.”

In the UK, Hussain is practically viewed as a national treasure. She's hosted two food travelogue shows, guest-starred on several more, and even baked alongside Kate Middleton and Prince William for a Christmas special. But for American audiences, Nadiya Bakes will be just the second show Hussain has on Netflix. In 2020, she debuted Nadiya's Time to Eat, which was focused on cooking shortcuts for time-strapped families. Nadiya Bakes is a return to form for Hussain, both in terms of content and expression. Six years ago, she was mostly wary of giving her public opinion on issues, wanting to only be seen as the friendly smile behind the kitchen counter. She still is, but now she's also using her ever-growing platform to voice her thoughts on what it means to be a brown Muslim woman in a white and male-dominated field.

“What I’ve learned in the past five years is that the change I want to see, I have to see in myself first," she said. "And if you’d asked me five years ago, what does it feel like to be a Muslim, I wouldn’t have entertained it. I would have said, look, can we just talk about the cooking and the baking?"

Now she's hoping that by continuing to be visible and outspoken in her field, she can pioneer a space for women like her. “Five years ago, I wouldn’t have had these conversations, because they would have made me uncomfortable. I wanted to just blend in." But the truth is, she said, "I’m never going to blend in. They will always tower over me, they will always be whiter than me, and they will be more English than I am, and they’re men. I will never, ever blend in. So I’ve come to the conclusion that, rather than trying to blend in, I’m going to create space.”

It's unclear if Nadiya Bakes will get a second season, but there are plenty more recipes in her book that a new season could adapt. Regardless, it sounds like Hussain is coming more into her own, and the eight new episodes make for an inspiring watch, in more ways than one.

More like this
'Love Is Blind: After The Altar' Season 3 Has A Release Date & It's Very Soon
By Grace Wehniainen
Love Is Blind’s Natalie Claims Shayne Signed Up For 'Perfect Match' While They Were “Still Together”
By Brad Witter
The 'Freeridge' Cast Shared Their Hopes For A Potential Season 2
By Grace Wehniainen
Netflix Shut Down 'Bridgerton' S3 Rumours About A “Very Dark” Storyline
By Bustle
Get Even More From Bustle — Sign Up For The Newsletter
From hair trends to relationship advice, our daily newsletter has everything you need to sound like a person who’s on TikTok, even if you aren’t.