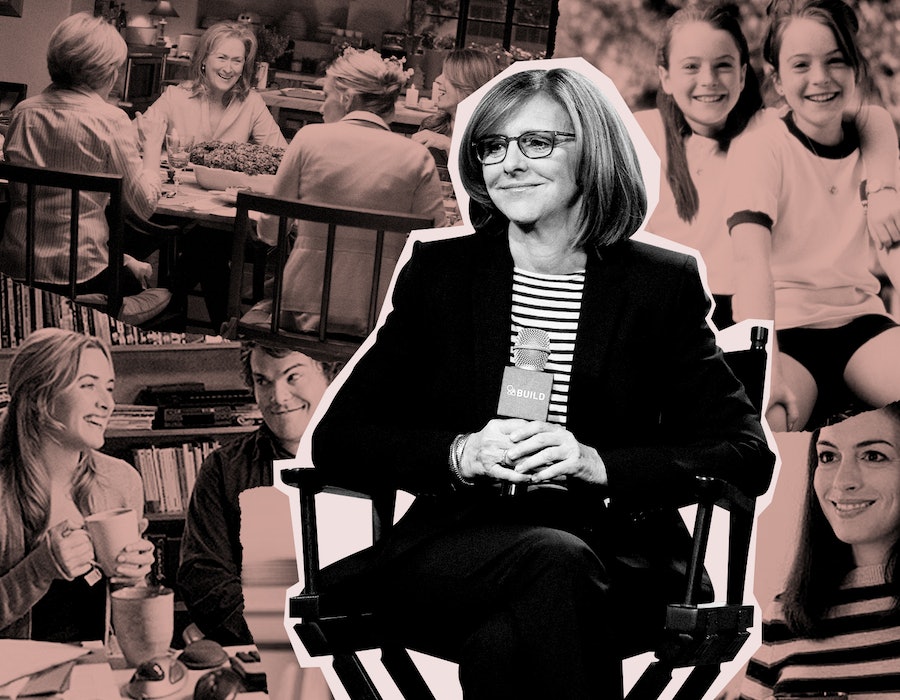 At the beginning of quarantine, back when we all had delusions of productivity and self-improvement, I emptied out my bookshelves and reorganized them by color. I tweeted my results, and the photo of my rainbow shelves became a lightning rod on the internet. Self-proclaimed book lovers began calling me out. If you’re using books for decoration, they shouted through their screens, clearly you’re not a real reader. (I’ve written four books; I assure you, I’ve read plenty.)

If the look isn't your taste (too Pinterest-y, too overdone?), sure, I get that. But what I found myself bristling against was the knee-jerk reaction that because something looked nice, it was somehow automatically frivolous. And that is how I got to thinking about Nancy Meyers.

Over the past few years, the domestic aesthetics of Meyers’ films have become internet canon. The Nancy Meyers kitchen (as seen in films like It’s Complicated, The Parent Trap, The Intern, and The Holiday) makes you a promise: if you lived here, it whispers, you would wake up in buttery-soft and expensive pajamas. You would make yourself an espresso and read the newspaper. You would roast organic whole chickens, and throw dinner parties, and always bring the right hostess gift. This is not a kitchen in which there are dirty dishes, or fruit flies, or food in the fridge rotting in take-out containers, because you have someone else to clean up after you. Many have tried to explain why this is so psychologically satisfying in artistic terms, but it’s surely just the fantasy of cocooned and rarified wealth, complete with cashmere and wine and lemons sitting on a counter just for show.

No one feels the need to praise Tim Burton or Wes Anderson movies in spite of their design.

But therein lies the rub: undeniably appealing as her aesthetic is, it being so stereotypically feminine means her movies are trivialized. Despite directing six films, three of which grossed over $100 million, Meyers is almost always ignored in critical conversations when it comes to directors with signature visual styles. I’ve found half a dozen lists on the internet about the film directors with the most stylish aesthetics; none included Nancy Meyers. Only a single list included any female director at all — The Wachowski siblings. (The GQ list included both Roman Polanski and Woody Allen, so make of that little tidbit what you will.) And it’s not as if these lists are kowtowing to traditional snobbery — sure, they include their Kubrick and Cocteau, but the Screenrant list of “15 Directors With a Signature Style” ranks both Zack Snyder (“Snyder proudly takes up his mantle as the master of style over substance”) and Michael Bay.

Instead, Meyers is lumped in a bevy of cut-and-paste romantic comedies or dismissed out of hand with the broad catch-all “chick flick,” a term which I believe comes from the Latin for, “Because it’s aimed primarily at women, it’s not worth engaging with in any meaningful way.”

I could spend a much longer essay arguing about the merits of Nancy Meyers' films, aesthetics aside, discussing the ephemeral alchemy of writing and performances that makes an enjoyable movie. But why do I need to put aesthetics aside?

No one feels the need to praise Tim Burton or Wes Anderson movies in spite of their design. Nancy Meyers movies are attractive. Sure, tensions never escalate above the temperature of an Earl Grey tea, and in the end, the characters literally or metaphorically are dancing around one of their gorgeous homes to Natalie Cole’s “This Will Be (An Everlasting Love),” but those sets don’t appear on screen fully formed, summoned wholesale from our collective fantasies of wealth on a breeze that smells like Santal 33. The Nancy Meyers aesthetic takes the kind of forensic detail that Quentin Tarantino no doubt devotes to his preferred shade of blood.

Yes, she has a double-range stove, the Sub-Zero fridge, and island counter space she uses to entertain her friends or unnaturally wholesome adult children.

Also, as Meyers herself has made clear in interviews, the aesthetics are more than window dressing. So many rom-coms give us an ingenue in her 20s still struggling to “make it.” Her apartment may be comically large for New York City, but she’s messy and clumsy, always spilling coffee as she stumbles in expensive footwear across well-lit cobblestones, her wish fulfillment coming in the form of a dream man, like a prince or a rich vampire or a sadomasochistic publishing billionaire.

The women in Nancy Meyers' films are here for exactly none of that bullshit. They are established in their careers as playwrights or bakery owners or wedding dress designers, and they suffer no fools. Where Hollywood desexualizes and disposes of women over 40, Nancy Meyers celebrates them, showing them as women who have crushed their careers and become financially stable enough to buy objectively stunning pieces of property.

And at the heart of that property? The kitchen, the room of the home that was the historical prison for middle-class women. So yes, a Meyers woman has a double-range stove, the Sub-Zero fridge, the chrome accessories, and miles of island counter space to entertain her friends or unnaturally wholesome adult children. And yes, she'll find love with a devilishly handsome older man when she's not expecting it, and when she does, it'll be backdropped by immaculate lines and cream-colored cashmere. Why? Because, goddamn it, it looks good.