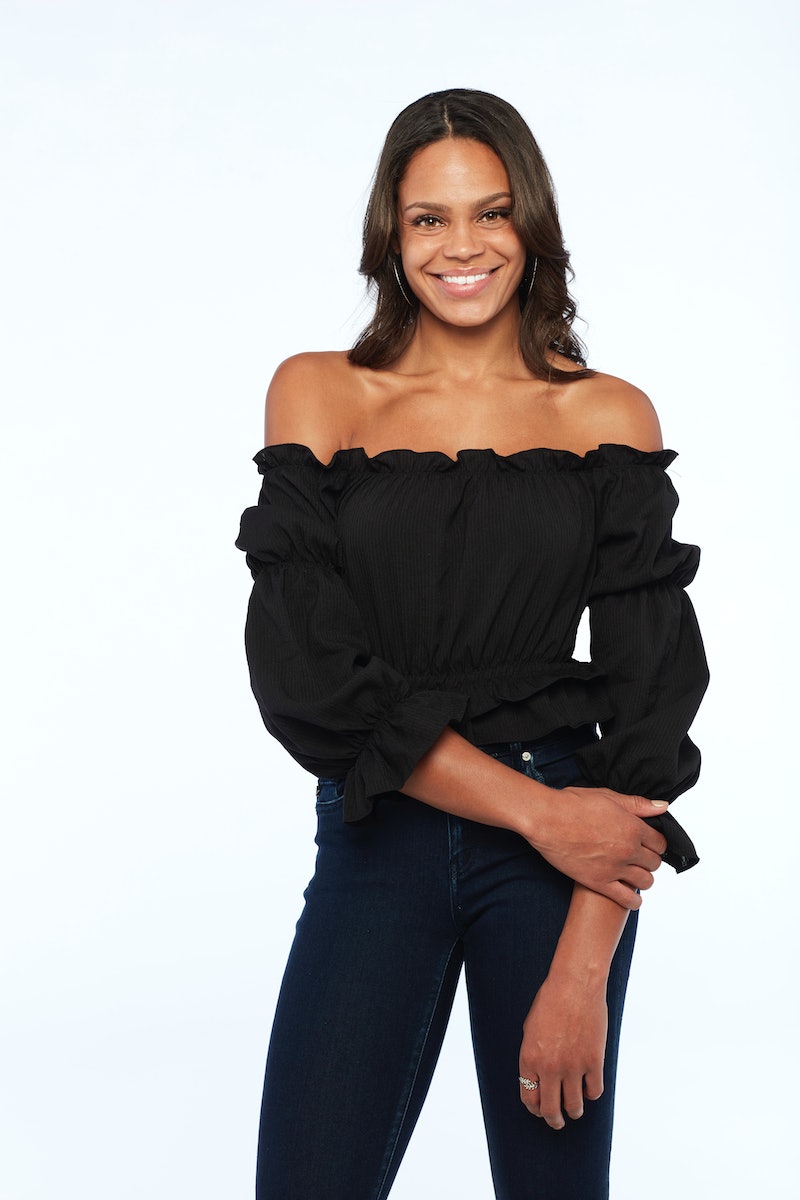 Former Bachelor contestant Michelle Young impressed both the Bachelor Nation and first Black Bachelor Matt James in Season 25 of the reality series. Fans will never forget James’ heartbreaking goodbye to Young during their final date and his tearful explanation for their breakup. And although she didn’t end up stealing James’ heart, the fifth-grade teacher’s awe-inspiring time on The Bachelor helped earn her own title as a Bachelorette.

Young may have given herself closure after her devastating split from James, but her time in the Bachelor franchise continues to heat up. The latest installment of The Bachelorette is officially set to premiere on Oct. 19 on ABC, and the network has already revealed the identities of the 30 men who will appear as contestants on Michelle’s season.

Filming for Season 18 of The Bachelorette reportedly ended in August and overlapped with Season 7 of Bachelor in Paradise, which airs through October. Young’s teaching schedule is the reason production is happening during the summer — she didn’t want to abandon her students in order to film The Bachelorette. Some of the show’s taping reportedly happened in Palm Springs, but Reality Steve tweeted that production for The Bachelorette seemingly moved to the Semple Mansion in Minneapolis. Steve also claimed on his website that Young and her suitors would stay at the Marquette Hotel in Minneapolis.

Reality Steve tweeted that Kaitlyn Bristowe and Tayshia Adams were tapped to co-host, and that news was confirmed by Variety on Aug. 2. Bristowe and Adams took over Chris Harrison’s hosting duties for Season 17 of The Bachelorette. Harrison made the decision to vacate the role after he received backlash for defending Rachael Kirkconnell’s racist comments in a February interview.

Viewers may be in for another treat as hometown dates are rumored to be re-introduced into the Bachelorette fold. According to Reality Steve, he’s been “told they plan on bringing back regular hometown dates this season, so they will be traveling to the guys’ hometowns.”

When it comes to Young’s turn as the Bachelorette, anything could happen. The dynamic “Minnesota girl at heart” has already captured the hearts of Bachelor Nation, and it’s anyone’s guess which lucky guy will do the same with Young. Check out everything we know about the full list of Season 18 contestants below.

Born and raised in Forest, Virginia, Alec is 29 years old and currently lives in Charleston, South Carolina. Per his Instagram, Alec graduated from the Virginia Military Institute in 2014 with a degree in Civil Engineering and now works as an engineer at Palmetto Railways.

Brandon J. is originally from Portland, Oregon, and he works as a traveling nurse practitioner. According to his Instagram, the 26-year-old loves swimming, basketball, and his dog, Little Mac.

Raised in Sulphur, Louisiana, 25-year-old Brandon K. currently resides in Austin, Texas, and his Instagram profile reveals that he graduated from Louisiana State University. Per his LinkedIn profile, he earned his Master of Business Administration degree from the Owen Graduate School of Management at Vanderbilt University in 2019 and currently works as an Associate Brand Manager for SkinnyPop at Amplify Snack Brands in Austin, Texas.

According to his Instagram profile, Bryan is a 30-year-old NFL veteran who lives in Chicago, Illinois and most recently played for the Kansas City Chiefs. Originally from Houlton, Wisconsin, he graduated from South Dakota State University and was an MBA candidate at Indiana University’s Kelley School of Business.

Originally from Parkland, Florida, 36-year-old contestant Casey’s website (which is linked in his Instagram bio) describes him as a “Miami-based producer and songwriter” who releases music under the name “CaseyDilla.” Per ABC, he currently works as an Advertising Creative Director. His website also reveals that he earned his Masters in Fine Arts degree in Miami “and never left,” noting that he plays guitar, piano, and writes lyrics.

Raised in Halifax, Nova Scotia, Canada, 27-year-old Chris G. currently works as a Regional Sales Director at Groupe Touchette Inc., per his LinkedIn page. According to ABC, however, he’s a professional Motivational Speaker. His Instagram bio reads, “Let’s all bring just a little more Ted Lasso into the world,” so he’s clearly a comedy fan and Apple TV+ subscriber.

Chris S. is 25 years old — aka the same age as Michelle — and per his Instagram page, he was “born and raised” in New Orleans, Louisiana. On Sept. 28, ABC revealed that he works as a Commodities Broker and currently lives in West Hollywood, California.

Per 28-year-old Clayton’s Instagram bio, the Eureka, Montana, native is a “former freestyle rapper and washed-up athlete now trying his luck in orthopedic sales.” According to LinkedIn, he earned his Bachelor’s degree from the University of Missouri-Columbia and is currently working towards his Master of Business Administration degree in Health Care Administration from Southeast Missouri State University. Clayton works as a Sales Representative at Stryker and currently lives in Columbia, Missouri. He’s also rumored to be the next Bachelor.

Daniel’s personal Instagram largely features photos of the 26-year-old Austin native’s gym trips and duties as a firefighter. He’s also a real estate agent and has a separate account for his business. The homes he sells are huge, and some of them sell for as much as $500,000.

Originally from Brownsville, Texas, Edward is a 27-year-old personal trainer and wellness coach currently based out of Los Angeles. According to his Instagram bio, he’s also signed to NTA talent and modeling agency and has appeared in ads for Nike.

According to his Instagram page, 33-year-old Bachelorette competitor Garrett is an “adventuring, outdoorsy entrepreneur” from Salt Lake City, Utah, who works as the CEO of tech equipment company Dark Energy.

Originally from Greensboro, North Carolina, 30-year-old Jack is a former Army officer and currently resides in Philadelphia, Pennsylvania, per ABC. According to Reality Steve, he’s an MBA student at Wharton School of Business.

Tacoma, Washington, native Jamie’s Instagram page reveals that the 32-year-old is the founder and CEO of SanctuAire, aka an “indoor air optimization system that mimics nature’s purification process,” which launched earlier this year. Per ABC, he currently lives in San Diego, California.

Joe is a 28-year-old Real Estate Developer, and he’s originally from Minneapolis, Minnesota. Per Reality Steve, he attended and played basketball at the University of Minnesota just like Bachelorette Michelle — and he noted that the two are already rumored to know each other. His Instagram page is private, but his bio features a Kanye West quote from 2015’s “Can’t Tell Me Nothing”: “Let up the suicide doors / This is my life homie, you decide yours.”

Per his Instagram page, 26-year-old JoMarri grew up in Portland, Oregon. He currently works as a personal trainer at Crunch Fitness in Figarden, California, and resides in Fresno.

Leroy is 27 years old, and the Durham, North Carolina native’s Instagram profile reveals that he’s studied at both the University of North Carolina at Chapel Hill and The University of Texas at Dallas. Reality Steve claims he’s currently attending the latter as a Biomedical Engineering Ph.D. student. Per ABC, he currently resides in Dallas, Texas.

The oldest contestant this season, LT is 38 and originally from Bellevue, Washington. According to an interview with Radar Online, he’s also Clint Eastwood’s grandson and has been vying to get on television for quite some time. His Instagram page reveals that he’s a fitness coach with interests in aviation, yoga, spinning, animals, and women empowerment.

Martin is 28 years old, and per his Instagram, he works as a fitness instructor and influencer with a YouTube channel and forthcoming app. Originally from Cordoba, Argentina, he currently resides in Miami, Florida, and is, without a doubt, the most physically ripped contestant.

According to his LinkedIn profile, 36-year-old Mollique earned his Bachelor of Science degree in Psychology, School Health, and Exercise Science in 2008 before receiving his Master of Education degree in Student Personnel Administration in Higher Education from Springfield College in 2010. The Jameshill, Jamaica native has also played basketball for the San Diego Guardians (per his Instagram) and currently works as the Assistant Director of Operations at Associated Students at San Diego State University.

Originally from Winnipeg, Manitoba, Canada, 27-year-old Nayte’s Instagram bio claims he currently resides in Austin, Texas — and that he “bought half” of his followers when he was 17 years old. The account also reveals that he graduated from Eastern Washington University with a Bachelor of Arts degree in Business Management and a minor in Africana Studies.

Raised in Woodland Park, New Jersey, Olumide’s LinkedIn profile reveals that he earned both his Bachelor’s and Master of Public Administration degree in Public and Nonprofit Administration from Rutger’s University and currently works as a Field System Analyst at OTG Management. According to the 28-year-old’s Instagram page, he’s also a model and certified personal trainer whose work has been featured on Fox’s Ultimate Tag and Live With Kelly and Ryan.

Pardeep is a 30-year-old Brooklyn native whose Instagram bio reveals him as a neuroscientist and host of a podcast called Deep Thoughts. Per his LinkedIn profile, Pardeep currently works as an Associate Research Scientist at Astellas Pharma US.

30-year-old PJ’s Instagram account is private, but it still reveals a lot about the Austin, Texas, native. A lot of his time is seemingly devoted to The Bakari Foundation, which offers assistance to families in mourning to honor the tragic 2017 murder of his brother, Bakari. Per the foundation’s website, PJ works as a City of Houston Firefighter and Emergency Medical Technician and earned his Bachelor of Science in Psychology with a minor in Kinesiology from Lamar University. Per ABC, he currently lives in Houston, Texas.

Originally from Munroe Falls, Ohio, 32-year-old Rick currently resides in Los Angeles, California, per his Instagram account. Per ABC, he works as a Medical Sales Representative.

Rodney was raised in Rancho Cucamonga, California, and according to his private Instagram account, he values “faith, family, [and] football” and attended California State University in Fresno, where he played for the Bulldogs. Per his LinkedIn profile, he currently works as an Outside Sales Representative at Cintas in Los Angeles.

Romeo is 32 years old, and he’s originally from New York, New York. His private Instagram bio simply states that he’s a “Data Scientist @ Ramp,” while ABC described him as a Mathematician. Per Women’s Health, he attended both New York University and Harvard University.

According to Ryan’s Instagram page, the 30-year-old Sanger, California, native currently resides in San Jose, though he travels a lot. He owns and operates an “environmental consulting company” called Fox Onsite Solutions, coaches events for the Special Olympics, and has previously competed in local “Bachelor Live on Stage” competitions.

Spencer is 25 years old, and he was born, raised, and currently resides in Cleveland, Ohio, with his 3-year-old son Braylen, per his Instagram profile. According to ABC, he works as a Financial Crimes Analyst.

Originally from Santo Domingo, Dominican Republic, 28-year-old Will currently lives in Grand Rapids, Michigan, works as an Academic Interventionist, and has a YouTube channel featuring workout videos. Per Reality Steve, he’s retweeted some pretty problematic tweets criticizing feminism and denouncing the existence of toxic masculinity, so we’ll see how long he sticks around.

More like this
Why Wasn't Teddi At The 'Bachelor In Paradise' Reunion?
By Brad Witter
Twitter Is Very Torn About The Winner Of 'Dancing With The Stars' Season 31
By Jake Viswanath
Michael & Danielle Reveal A Pivotal 'BiP' Moment We Didn't See Onscreen
By Kadin Burnett and Grace Wehniainen
Danielle Regrets Talking About Sierra On That Post-'Paradise' Podcast
By Kadin Burnett and Grace Wehniainen
Get Even More From Bustle — Sign Up For The Newsletter