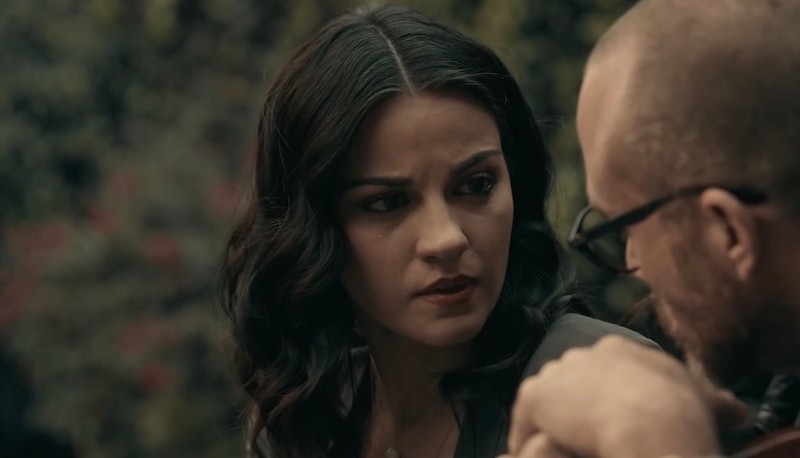 Netflix's new Spanish-language thriller, Dark Desire (aka Oscuro Deseo), is a twisty tale of betrayal, obsession, and murder. That gives the show a lot to unpack if it returns for Season 2, though the streaming service has yet to announce a renewal.

The series centers around Alma Solares (Maite Perroni), a prestigious lawyer and college professor in her late 30s who visits her best friend for the weekend to help her process her divorce. But things take a turn when Alma — who's married to a judge with plenty of his own secrets — meets a handsome 23-year-old named Dario (Alejandro Speitzer). The two have a "wild tryst" that Alma is determined to forget once she gets home...until Dario shows up as a student in one of her classes. "What started as a minor adventure becomes an incendiary passion, and then a dangerous obsession, unraveling a chain of secrets of a past that fatally binds them all," reads Netflix's official synopsis.

At 18 episodes, there's a lot of drama packed into the first season. Maybe by the time fans make their way through, there will be some news about a Dark Desire Season 2.

More like this
Here’s Why Danny Masterson’s Hyde Isn’t In 'That '90s Show'
By Brad Witter
Everything To Know About 'Cobra Kai' Season 6
By Brad Witter
'The Crown' Season 6 Has Suspended Filming "Out Of Respect" For The Queen's Death
By Bustle Staff
All The ’70s Easter Eggs You Missed In 'That ’90s Show'
By Grace Wehniainen
Get Even More From Bustle — Sign Up For The Newsletter
From hair trends to relationship advice, our daily newsletter has everything you need to sound like a person who’s on TikTok, even if you aren’t.