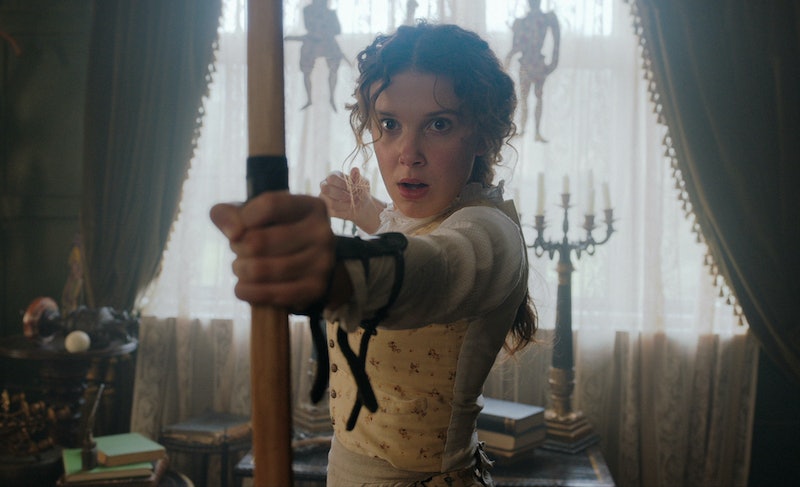 Although once considered the ‘lesser’ film medium, straight-to-streaming movies are having a moment. Joining the ranks of critically acclaimed films such as Marriage Story, The Irishman, and Okja is a star-studded mystery with Millie Bobby Brown at the helm. But when is the highly anticipated Enola Holmes coming to Netflix in the UK?

Based on the Nancy Springer book series of the same name, Enola Holmes follows the story of Sherlock's younger sister. The adventurous teen sets off on a mission to find her missing mother (Helena Bonham-Carter) and “unravels a dangerous conspiracy around a mysterious young Lord” along the way.

The film’s all-star cast features Millie Bobby Brown in the title role. Brown’s career started with another Netflix Original, as Eleven in Stranger Things, but now the Emmy Award-winning actress is ditching her sci-fi roots to take on the role of Holmes’ adolescent sister. As well as acting in the film, she was also a producer, too.

Elsewhere, Henry Cavill (Superman, The Witcher) stars as Sherlock Holmes, and Sam Claflin (The Hunger Games, Me Before You) takes on the role of Mycroft Holmes, Enola and Sherlock’s older brother, while the inimitable Bonham-Carter plays their mother, Mrs Holmes.

Enola Holmes has some serious chops behind the camera, too. The Netflix movie is directed by Harry Bradbeer, director of Fleabag and Killing Eve, and the screenplay is written by Jack Thorne (His Dark Materials, The Eddy).

The streaming service appears to be going ahead with the film’s release both in the U.S. and the UK, despite being sued by, among others, the estate of Sir Arthur Conan Doyle, Sherlock Holmes original creator. While Enola Holmes is a spin-off based on Springer’s books series, Conan Doyle's estate claims that the story infringes on copyright and trademarks on how Sherlock is portrayed, and where some of his characteristics originate. It's not yet clear if Netflix has responded to the lawsuit.

Netflix finally released a first look at the upcoming film on the Netflix Twitter page this week, with the caption ‘alone loshme reeebtpms wnettyrhitd’, an anagram which reads September 23.

Enola Holmes will be released on September 23 on Netflix UK.