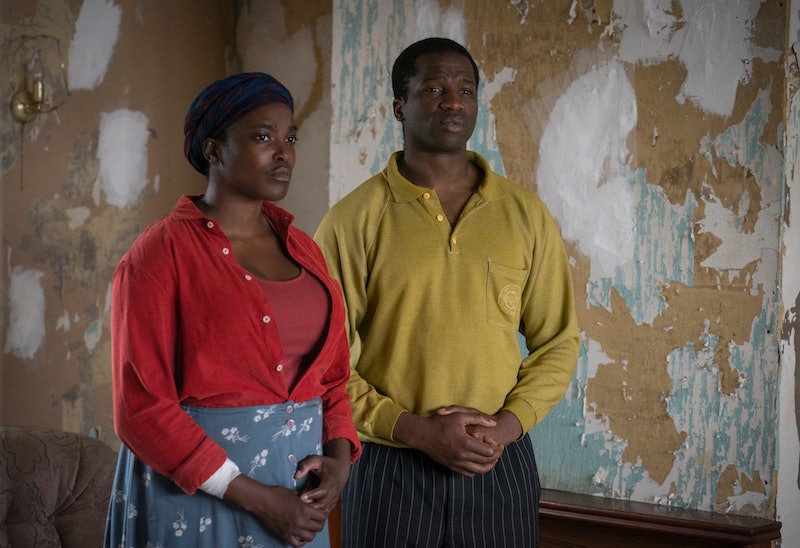 The classic haunted house narrative is getting a contemporary twist in the spooky trailer for His House, Netflix’s newest horror film from director and screenwriter Remi Weekes. Low-key evoking the vibes of Jordan Peele’s masterful Get Out, the film follows a young refugee couple who escape war-torn South Sudan and settle in a small (very white) English town, hoping to rebuild their lives. However, they soon find that a sinister evil lurks beneath the surface of their new flat. The film arrives on Netflix on Oct. 30 — just in time for Halloween.

Ṣọpẹ́ Dìrísù (Sand Castle) and Wunmi Mosaku (Lovecraft Country) star as the young couple in the film, while Matt Smith (The Crown) stars as the couple’s suspect landlord. In the first trailer unveiled on Wednesday, Sept. 30, the two arrive to a relatively normal looking flat — minus the old pizza box filled with roaches and a creepy white woman neighbor, and all — but soon discover that some dark force resides there, too. Mosaku’s character proposes returning home to South Sudan, but her beau refuses to go back to such a turbulent environment.

In the same vein as Get Out, it appears that His House will use horror to explore themes of racism and trauma, with an added twist of immigration.

In an interview with Collider in February, Weekes revealed that his experiences of growing up as a Black man in the U.K. informed the film. “I think it began growing up in London and coming from an ethnically diverse background,” Weekes said. “Experiences of being a Black person in the country where you’re never always feeling like you’re wanted, and how that feels for an immigrant moving to a country and trying to find their way in this place.”

Mosaku, for her part, is also no stranger to juxtaposing horror and humanity. She also stars in HBO’s Lovecraft Country as Ruby Baptiste, the half-sister of Jurnee Smollett’s Letitia Wright. Based on Matt Ruff's novel of the same name, the horror fantasy TV series follows a young man (Jonathan Majors) who journeys across 1950s Jim Crow America to find his father — discovering horrors along the way. Mosaku reflected on the infusement of racial elements with horror in Lovecraft Country and His House in an interview with Women’s Wear Daily in August. “It’s not just bumps in the night, it’s not just gore and blood,” she said.