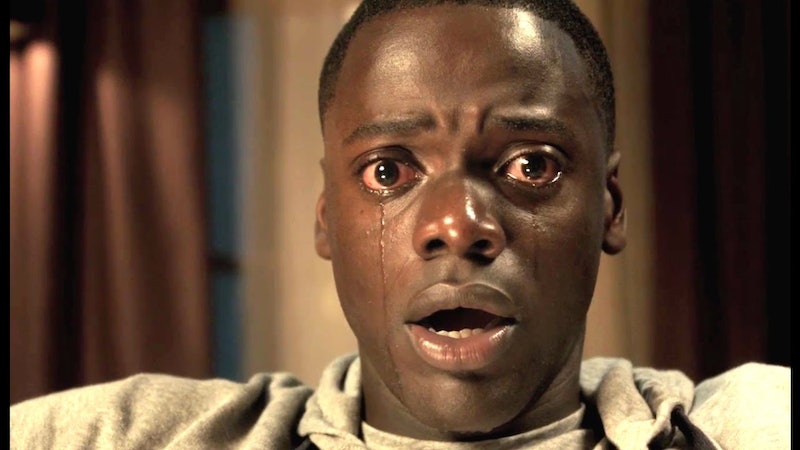 There's a running joke that many Black people say when talking about horror films: "In scary movies, Black folks always die first." Well, thankfully, it looks like Jordan Peele of the Comedy Central show Key & Peele is changing that narrative in his upcoming movie Get Out, which premieres Feb. 24. Judging from the trailer, the movie seems like it's set to kill many stereotypes about race and feature racial commentary, and personally, I'm hoping that this will start a trend of more culturally relevant, and less cliched, horror movies, especially coming from filmmakers of color.

It’s no surprise to me that Peele's first film as a director would involve racial commentary, as one of his most famous skits revolves around the fear a black man has walking through a white neighborhood. It's interesting, though, that he would insert this theme into a scary movie, and that the movie would feature a black lead character. Get Out is one of the first major horror films since the early '90s to have a black protagonist, and it might be the only one in recent memory to discuss the psychological discord many Black people face due to micro-aggressions based off race.

“It is one of the very, very few horror movies that does jump off of racial fears. That to me is a world that hasn’t been explored. Specifically, the fears of being a black man today,” Peele said in a recent Playboy interview. “The fears of being any person who feels like they’re a stranger in any environment that is foreign to them. It deals with a protagonist that I don’t see in horror movies.”

Get Out follows Chris (Daniel Kaluuya), a Black man planning to meet the parents of his White girlfriend Rose (Allison Williams) for the first time. However, from the very beginning, things start to feel weird for the duo. They encounter a local cop who puts them on edge, and once they arrive at Rose's parents' neighborhood, Chris becomes aware of the town's strange behavior: the town's Black residents are going missing.

It's hugely significant to see a psychological thriller that's based on race and discusses what it's like for a Black man to navigate an almost entirely White community. In just the two minutes of the movie's trailer, Get Out tackles multiple issues, from systematic racism to interracial relationships to Black horror movie stereotypes to White privilege. It's a horror film, but also a satirical and fascinating commentary on our society's very real race-related issues.

These are all topics that are more relevant than ever, with the constant conversation around police shootings, racial interactions, and classism, and they're explored all throughout the movie. In one Get Out scene, for instance, the couple has to interact with the police after hitting a deer. The police officer demands the Black man's license even though his White girlfriend was driving during the accident, something that might feel all too relatable for Black viewers.

With Get Out Peele is doing something that we often don't see done in horror films, and I, for one, will be rushing to the theater to see the impact the movie will have on the conversations about race and classism in America. For the first time, I'm excited to get scared.

More like this
What’s New On Netflix: Meet 'The Real Bling Ring'
By Arya Roshanian
What’s New On Netflix: Camila Mendes & Maya Hawke 'Do Revenge'
By Arya Roshanian
Here’s Everything Coming To & Leaving Netflix In October
By Jake Viswanath
Pro Footballer Zander Murray Is "Blown Away" By Support After Coming Out
By Sam Ramsden
Get Even More From Bustle — Sign Up For The Newsletter