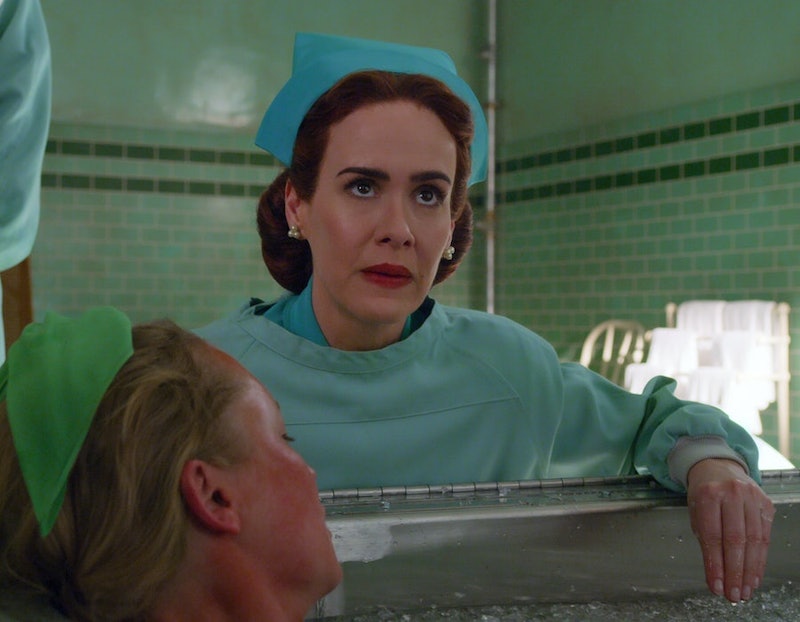 Get ready to become terrified of hospitals and nurses. On Tuesday, Aug. 4, Netflix released the first trailer for Sarah Paulson's Ratched, which explores the origin story of one of cinema's most iconic villains. Nurse Ratched first made her big screen debut in the 1975 Oscar-winning film, One Flew Over The Cuckoo's Nest, as she lorded her power and authority over her patients with an iron and uncaring fist. She was instantly someone to be feared, but now it's up to Ryan Murphy and Paulson to deliver her chilling backstory to the masses and demonstrate to viewers how this formerly good-natured nurse transforms into the diabolical woman we all know she ultimately becomes.

The trailer focuses mainly on Mildred Ratched's arrival to Northern California, where she soon finds employment at a leading psychiatric hospital. Her tone and demeanor exude an eerie calmness that's guaranteed to send chills up your spine. And while she never raises her voice, it becomes all too clear that she is not to be trifled with. (Seriously, don't ever steal this woman's peach!)

As time goes by, she begins to infiltrate the mental health care system, subtly sinking her hooks into those who are — or at least think they are — in a position of authority. But soon both the patients and the staff will come to realize that there's only one person in charge of this institution and her bedside manner leaves little to be desired.

"You have been subjected to enough pain, but you deserve someone to show you mercy," Paulson's Nurse Ratched is shown saying to a patient in the clip. "How different I would be if someone had." That alone is the only teaser of the character's dark and troubled upbringing, but it's an aspect that will be further explored and one that helped Paulson relate to — and dare she say empathize — with the infamous nurse.

“I identified very deeply with her loneliness. I think ultimately at the end of the day, that is sort of what drives Mildred,” Paulson explained during an interview with Vanity Fair. “A pursuit of survival and of finding some sense of home. Even though the methods that she chooses to achieve that internal security are somewhat questionable, I would argue that she’s doing them with a potentially selfish need, but a survival need nevertheless. Sort of an animal need that blinds her to the inappropriateness of some her actions.”

And while you may not understand how a person could fall down such a dark and unforgiving path, Paulson promises all will become clear by the end of the story. “By the time you get to the end of the first season, you will not wonder how and why Mildred became the way she did," she added. "You may question her actions, you may have judgment about it—but you will understand it. It will make sense to you.”

And quite potentially give you nightmares for weeks to come.

More like this
'The Queen’s Gambit' Season 2 Tweet Wasn’t From Anya Taylor-Joy
By Mary Kate McGrath, Jack Irvin and Grace Wehniainen
Netflix Shut Down 'Bridgerton' S3 Rumours About A “Very Dark” Storyline
By Bustle
'The Crown' Season 6 Has Suspended Filming "Out Of Respect" For The Queen's Death
By Bustle Staff
The 'Freeridge' Cast Shared Their Hopes For A Potential Season 2
By Grace Wehniainen
Get Even More From Bustle — Sign Up For The Newsletter
From hair trends to relationship advice, our daily newsletter has everything you need to sound like a person who’s on TikTok, even if you aren’t.