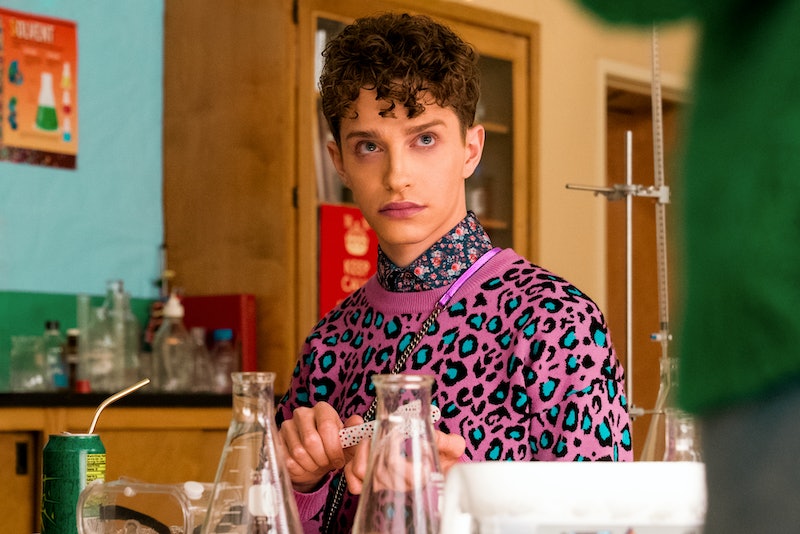 Mindy Kaling still hasn’t written herself into Netflix’s Never Have I Ever yet, but her most devoted of fans might have spotted another, more subtle way that she left her mark in Season 2 of the hit series she co-created with Lang Fisher. In Episode 6, there’s a fashion moment that pays homage to another great work of Kaling’s past: The Mindy Project. Actor Dino Petrera, who plays Jonah, pointed it out on Twitter on Saturday, July 17, showcasing a “hand-me-down” from Kaling’s OB-GYN character Mindy Lahiri.

“Can you even handle this hand-me-down?” Petrera wrote alongside a heart-eye emoji. The photo showed him as his fashion-savvy character, wearing a pink-and-blue animal-print sweater. Next to it was a photo of Kaling wearing the exact same sweater, albeit without the floral collar and purse paired with Jonah’s.

The Mindy Project alum, of course, approved. “This is my favorite post on the Instagram platform,” Kaling commented on Petrera’s post. She also shared it in her Instagram stories, offering a few more details about the glorious fashion connection. “We all love the dreamy scene stealer @dinopetrera as Jonah on @neverhaveiever . But did you know he wore a Mindy Lahiri sweater @salvadorperezcostumes styled me in from season 6?" she wrote across her story.

Funnily enough, Kaling didn’t seem to initially make the connection between Jonah’s sweater and Mindy Lahiri’s wardrobe. Costume designer Salvador Perez, who worked on both The Mindy Project and Never Have I Ever, reposted Petrera’s side-by-side photo with a behind-the-scenes anecdote. “When I sent the fitting pic of Jonah to @mindykaling she said ‘I love that sweater!’” Perez wrote. “I told her of course you do, it was yours! it’s from the NBC archives!” The costumer also celebrated sustainable fashion and the fact that “Mindy and Jonah are the same size!”

In case fans didn’t get a good enough view of Jonah during Episode 6, Perez made sure to give them “the complete lewk” in another Instagram post. The photo shows Petrera on set with the aforementioned sweater and collar, plus his rainbow purse, blue pants, and millennial pink loafers are also visible. It’s a lewk indeed.

The outfit is perfect for Jonah, who started Season 1 as a Sherman Oaks High School student who had yet to find the courage to come out as gay. Across two seasons, fans have seen him more fully embrace his true self, with his already unique style getting bolder as well. He’s also proved to be a supportive friend, especially to Fabiola (Lee Rodriguez) as she works through what it means for her to be a queer woman.

Speaking to The Advocate earlier in July, Petrera opened up about being part of a series with multiple gay characters. He tied it to his nephew, who came out as trans earlier this year, and said, “For him to see that there’s just not a token gay character in the series sends a very powerful message. … Having him see me and others on-screen gives him great insight and is allowing us to have much stronger conversations.”

Never Have I Ever Season 2 is now on Netflix.