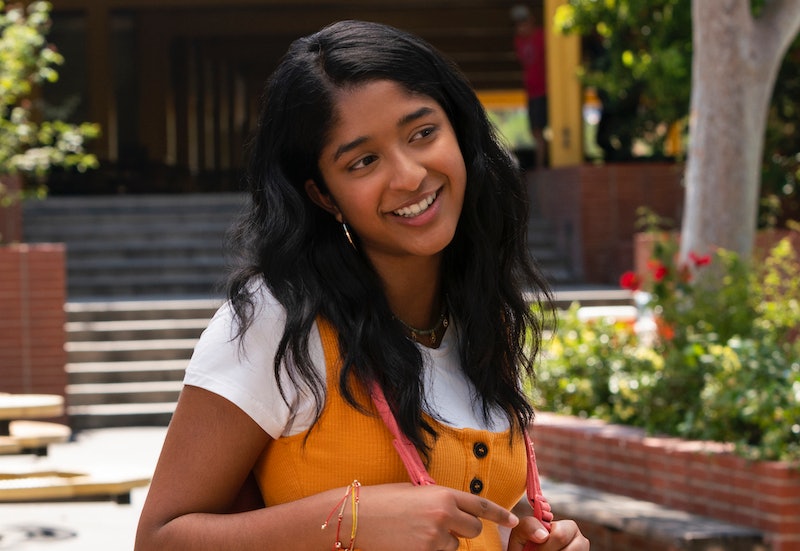 Maitreyi Ramakrishnan, Never Have I Ever breakout star and The Office superfan, has some ideas for the second season of her hit Netflix series. Fresh off the news of Never Have I Ever’s renewal earlier this month, Ramakrishnan said she wanted series co-creator Mindy Kaling and Office star Steve Carell to guest star in Season 2 of the coming-of-age series. In an interview with Entertainment Tonight on July 10, Ramakrishnan entertained the idea of Kaling and Carell as Devi’s relatives — but also maintained that Carell probably wouldn’t make much sense as an uncle. Still, the lead star is all for a Kaling cameo.

"Mindy needs to be on Season 2," Ramakrishnan said. "That's not negotiable. She needs to be on Season 2. That would be awesome to be able to act with her.” She added, “Anybody could play a family member. She could play somebody in the school. She could do whatever." Ramakrishnan then suggested the co-creator play the role of Mohan’s (Devi’s late father, played by actor Sendhil Ramamurthy) sister. "She could play Devi's dad's sister,” Ramakrishnan said. “She can be an aunt, like the cool aunt. Yes, she would be the cool aunt that enables all of Devi's behavior.”

Created by Kaling and Lang Fisher, Never Have I Ever follows Indian-American teen Devi (Ramakrishnan) as she navigates the trials and tribulations of high school, as well as the sudden loss of her father. The series, loosely based on Kaling’s own childhood, debuted on Netflix in April to critical success. The cast announced the Season 2 renewal on July 1 with a Zoom video shared on Instagram. While it’s unclear when production will begin due to COVID-19, Season 2 will premiere sometime in 2021.

As for how the new season could unfold, the series concluded with quite a few cliffhangers that still need to be addressed — such as the Devi, Ben, and Paxton love triangle. Ramakrishnan addressed Devi’s romance woes in an interview with TV Guide in May and said she’s neither Team Ben or Team Paxton — but Team Devi. "I'm Team Devi — Devi herself — because I truly hope that no matter who she ends with, she learns how to love herself,” she said. "That's not something only high school kids can relate to [but] everybody can relate to it. Not enough people love themselves.”

Kaling as the cool aunt who helps Devi learn to love herself? Let's manifest this.

More like this
'The Queen’s Gambit' Season 2 Tweet Wasn’t From Anya Taylor-Joy
By Mary Kate McGrath, Jack Irvin and Grace Wehniainen
'The Crown' Season 6 Has Suspended Filming "Out Of Respect" For The Queen's Death
By Bustle Staff
Ashton Kutcher Wants Danny Masterson “To Be Found Innocent” In Rape Retrial
By Jake Viswanath
Here’s Everything Coming To & Leaving Netflix In February
By Jake Viswanath
Get Even More From Bustle — Sign Up For The Newsletter
From hair trends to relationship advice, our daily newsletter has everything you need to sound like a person who’s on TikTok, even if you aren’t.