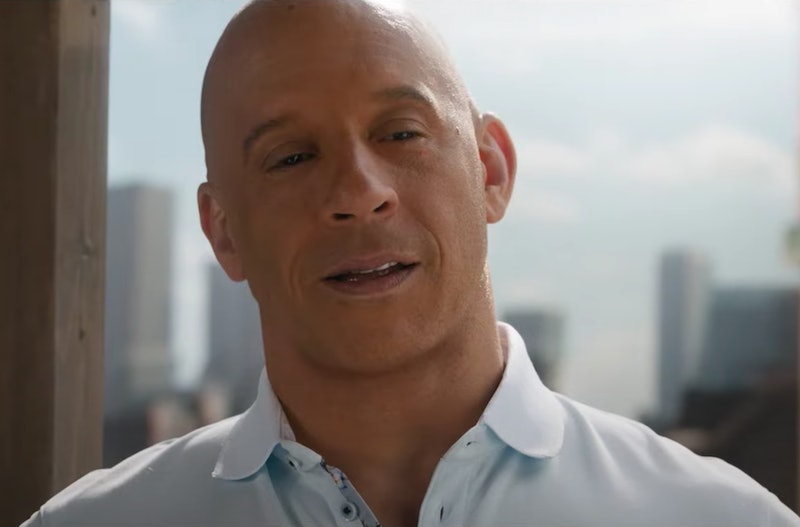 For those of us uninterested in the spectacle of men in tights tackling each other, the Super Bowl trailers have always provided much needed entertainment. But due to the coronavirus pandemic's effect on the film and TV industry, there were a little less than usual during Super Bowl LV. It's still unclear when it will be safe enough to reopen theaters, and movies that were advertised during last year's Super Bowl — like Fast & Furious 9, No Time to Die, and Black Widow — are still waiting to premiere.

Still, there are a handful of projects to look forward to, including movies and shows that you can enjoy from the safety of your living room couch. Here's a roundup of all the trailers you might have missed while getting snacks.

Yes, F9 was advertised last year too, but Universal Pictures dropped yet another teaser to remind fans that it's now aiming to release the movie this summer. In F9, Vin Diesel’s Dom Toretto is leading a quiet life with his wife Letty (Michelle Rodriguez) and their son when they're pitted against Dom’s forsaken brother, Jakob (John Cena). The trailer shows the return of Sung Kang's Han as well as the franchise's usual physics-defying stunts.

Raya and the Last Dragon

Starring Star Wars' Kelly Marie Tran as Raya, the fantasy film follows her hunt for a dragon who can reunite their warring tribes. This is Disney's first animated film to focus on a South East Asian protagonist, and the cast includes Gemma Chan as the villain Namaari and Awkwafina as Sisu the dragon. The trailer features a new comedic scene with Sisu and Raya.

M. Night Shyamalan's latest thriller has been swathed in mystery, but the trailer finally shed some light on the project. Old takes place on what seems to be a haunted island where people age unnaturally fast.

The Falcon and the Winter Soldier

The Falcon and the Winter Soldier will follow Sam Wilson (Anthony Mackie) and Bucky (Sebastian Stan) as they figure out what to do after their friend Captain America decided to stay in the past and live out his life with Peggy. In the final moments of Endgame, Captain America handed his shield off to Sam, while Bucky was still on the run from the U.S. government.

The sequel to John Landis’ 1988 comedy, Coming 2 America features Eddie Murphy reprising his role as Zamunda's pampered royal Akeem. Accompanied by his confidante Semmi (Arsenio Hall), Prince Akeem initially traveled to Queens, New York in search of a wife. In the sequel, Akeem is now a king, and along with Semmi they embark on a journey that spans the globe.

More like this
'Breaking Bad' Duo Walt & Jesse Are Back — In This Super Bowl Commercial
By Jake Viswanath
The 2023 Super Bowl Commercials Feature A 'Breaking Bad' Reunion & Missy Elliott
By Alyssa Lapid
Alicia Silverstone Revives Her 'Clueless' Character In This Super Bowl Commercial
By Jake Viswanath
At 28, Rosie Perez Risked Her Career To Stop Playing Stereotypes
By Gabrielle Bondi
Get Even More From Bustle — Sign Up For The Newsletter
From hair trends to relationship advice, our daily newsletter has everything you need to sound like a person who’s on TikTok, even if you aren’t.