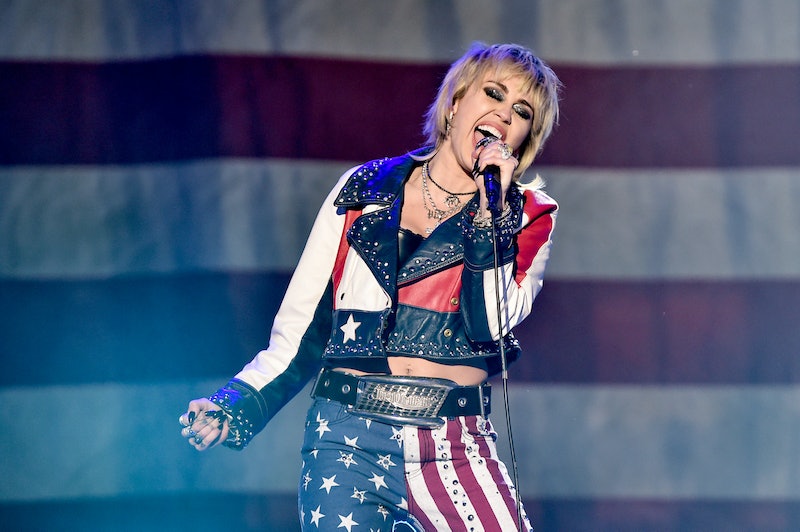 In difficult and unpredictable times, there's nothing like the comfort of the familiar. The 2020 Dick Clark's New Year's Rockin' Eve performances certainly delivered in that regard. Artists like Miley Cyrus, Nelly, and En Vogue performed popular throwback hits, while famous '00s musicians like Brandy and Ciara wowed fans with new songs.

With the ongoing pandemic, it was inevitable that this year's Rockin' Eve would look different from past celebrations. Per Variety, only 150 people were invited to attend the show in person, and included only frontline workers, first responders, and their families. Elsewhere, the hosts social-distanced, and celebrants danced in masks. It was unusual — and even a little dystopian — to see Times Square looking emptier than ever, but the musicians helped audiences to remember better days.

Miley Cyrus kicked off the 49th annual show with a rock performance of her 2009 smash hit, “Party in the U.S.A.” Decked out in a patriotic leather outfit, Miley belted out the song that was, admit it, on everyone's summer playlists in 2009. "Of the few good things to come out of 2020, Miley’s rock rendition of party in the USA might be my favorite," wrote one Twitter user.

Miley later came back on stage and performed Stevie Nicks' "Edge of Seventeen" in a black fringe outfit.

"There's something comforting about seeing familiar faces," wrote another Twitter user. "It's been a rough year, good to see people who have been thru the highs and lows all these years."

Popular '90s R&B group En Vogue also made an appearance, performing the 1992 hit "Free Your Mind." The trio — which includes founding members Terry Ellis and Cindy Herron, as well as Rhona Bennett —recently made a comeback with their 2018 album, Electric Café.

Meanwhile, at the celebration in Los Angeles, Ciara busted out her and Ester Dean's hit "Rooted," which they debuted in August. "'Rooted' is a song that celebrates Black joy. It celebrates our uniqueness and strength," Ciara said in a behind-the-scenes video. "It spoke to me in so many ways. There was a strong feeling of being empowered."

Brandy also took the stage on the West Coast to perform her latest single “Take Me Back,” from her new 2020 album, B7. She also performed her popular 2002 track “What About Us."

The throwback theme continued throughout the evening, some proving to be more amusing than others. In an advertisement for Planet Fitness, Alfonso Ribeiro danced The Carlton, for example. Cyndi Lauper also took the stage to perform her 1986 hit, "True Colors," but it was so off-key Twitter users were quick to lampoon the set. (She also had a quick change mishap where she yelled "I’m on camera! I’m on camera!" while the assistant attempted to remove her scarf.)

And of course, Jennifer Lopez rounded out the night with an ironic choice in song: a cover of Aerosmith's 1973 song, "Dream On."

The evening might have felt like one big time warp, but at least it provided some semblance of comfort — and laughs — going into a hopefully better 2021.