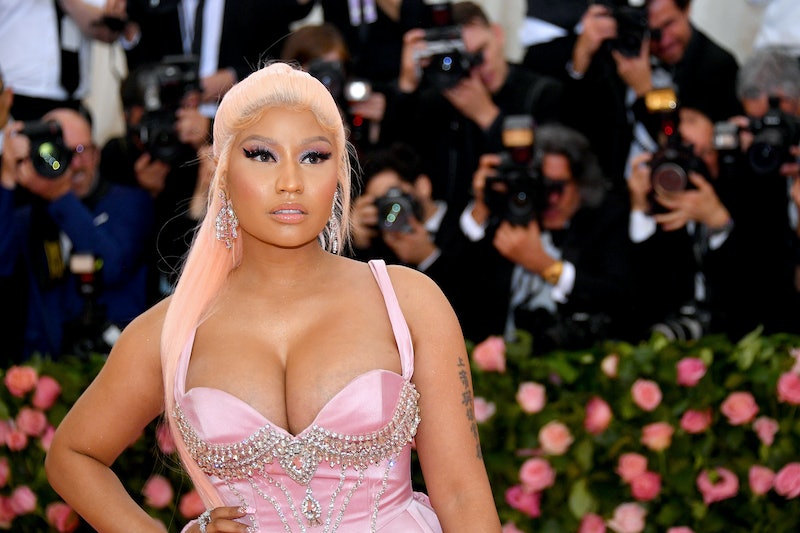 Just a few months after announcing her pregnancy, Nicki Minaj welcomed her first child with husband, Kenneth "Zoo" Petty, according to multiple reports. Bustle can confirm that the rapper gave birth on Wednesday, Sept. 30, in Los Angeles, as initially reported by People, though not much else is known about her new baby.

Minaj announced her pregnancy on Instagram back in July with a series of photos that showed off her growing belly. She captioned her first post with the hashtag "#Preggers," then further confirmed that she and Petty were expecting in a third post. "Love. Marriage. Baby carriage," Minaj wrote. "Overflowing with excitement & gratitude. Thank you all for the well wishes." The pregnancy news came after the two tied the knot in October 2019 after a year of dating.

The "Anaconda" rapper has been vocal about her desire to start a family in the past. She even announced a (short-lived) decision to retire on Twitter last September. "I've decided to retire & have my family," she wrote in now-deleted tweets. "I know you guys are happy now. To my fans, keep reppin me, do it til da death of me … Love you for LIFE." (Minaj ultimately released a new single, "Yikes," in February.)

According to TMZ, Minaj and Petty have known each other since they were teens. Petty was the rapper's first love at age 16, long before her rise to stardom. While Petty has a troubled past (he's a registered sex offender who was convicted of attempted rape in April 1995, according to the publication), a source told TMZ that Minaj is confident that her beau has matured since his time served behind bars. Minaj has also defended her husband in the past. In an Instagram comment captured by The Shade Room in December 2018, Minaj addressed a fan in her comments section: “He was 15, she was 16 … in a relationship. But go awf Internet," she claimed. "Y’all can’t run my life. Y’all can’t even run y’all own life. Thank you boo.”

And, last June, Minaj gushed about Petty on her Queen Radio show on Apple Music’s Beats 1 Radio. "I think I have what I was striving for, just happiness," she said of the relationship. "It was so hard to get to a happy place. Now that I'm there, I don't want to compromise that for anyone or anything."

More like this
What Demi Lovato Really Thinks About Child Stardom, Depression, & Sobriety
By Radhika Menon
Everything To Know About Taylor Swift’s 10th Studio Album, 'Midnights'
By Grace Wehniainen and Jake Viswanath
Kanye West Apologizes To Kim K "For Any Stress I Have Caused" In Rare Interview
By Jake Viswanath
Adam Levine Denies Having An Affair — But Admits He “Crossed The Line”
By Jake Viswanath and Radhika Menon
Get Even More From Bustle — Sign Up For The Newsletter