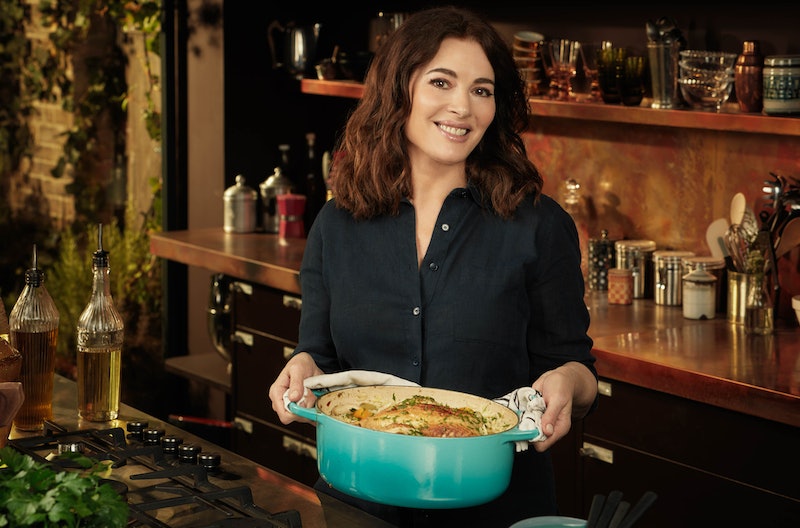 Whether it's her more - ahem - “unusual” recipes (banana skin curry, anyone?) or her sultry demeanour and devotion to chocolate, Nigella Lawson certainly knows how to get people talking. The latest that has whipped fans into a frenzy is Lawson’s unique pronunciation of “microwave”.

The celebrity chef was whipping up a batch of brown butter colcannon during Monday night's episode of her latest cooking series Cook, Eat, Repeat on BBC Two when she offered up an unusual variation on the household appliance’s name.

As she was mashing some potatoes, Lawson carefully guided viewers through the steps to the recipe, as she always does, and reached the point when the next step was to pour in some warm milk into the mash.

Splashing some full-fat milk into the pan of potatoes, Lawson explained that she had warmed it in the “meecro-wah-vay”. "I still need a bit of milk – full fat – which I've warmed in the microwave," she said, pronouncing the household appliance as “meecro-wah-vay”. You really do have to hear it to believe it - watch Nigella's bizarre pronunciation of the word below.

Of course, given the year that 2020 has been, such a unique utterance could not go by without social commentary, and Twitter users were happy to oblige.

One viewer commented, “2020 has thrown a lot of curveballs at us but I was truly not expecting the way Nigella Lawson says microwave to be one of them,” whilst others questioned if they had heard the unique utterance correctly, asking “Did Nigella Lawson really just call a microwave a 'mee-cro-wah-vay?’”

However, some fans were on board with Lawson’s pronunciation of the appliance, with one fan declaring: “Nigella Lawson just pronounced Microwave as 'Meekro-Warvay' so I guess that's the only way to say it from now on.”

“Nigella Lawson saying 'Microwave' like this has made my Christmas already,” tweeted another, whilst a third declared it “iconic”.

The domestic goddess later said she did not believe that was the way the word should be pronounced, but that she “always says it like that” and not just for the TV series.

One viewer tweeted: “Am I the only one who thought @Nigella_Lawson was being sarcastic when she pronounced Meecro-wavé?! Now, I’m starting to think she really pronounces it like that?”

Nigella replied: “Well, I do say it like that, but not because I think that’s how it’s actually pronounced,” before revealing that it was a "camp joke that becomes a habit."

There's no escaping the internet comedians that easily though Nigella, the meme-makers are at it again. We've gathered our favourite responses of what shall be known henforth as "meecro-wah-vay"-gate: