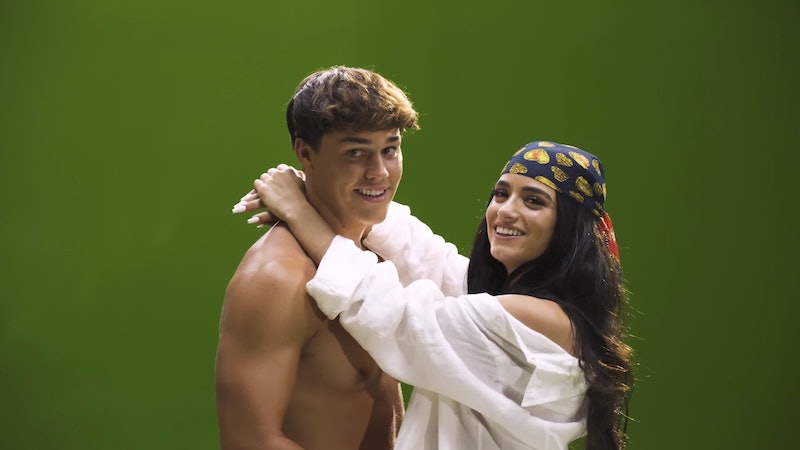 After facing criticism for traveling to the Caribbean with his friends and fellow influencers in late December, Noah Beck defended taking a vacation in the Bahamas in the middle of a pandemic. On Dec. 28, the Tik Tok star was spotted at the Atlantis resort in Nassau alongside his girlfriend Dixie D'Amelio, her sister Charli and other social media stars like Chase Hudson and Madi Monroe, despite the fact that Los Angeles — where they all live — has been facing a massive spike in COVID-19 cases.

Beck told Pap Galore that the vacation was "really fun," before defending the group from their critics online. "It is what it is, you know," he told the outlet, before explaining that they planned the getaway to relax and recharge. "I think, especially the business we're in, it's like you need some time to kind of disconnect for a little. That's what that was meant for. It was just a little trip to get away."

"We wanted to get away from everything and we took a private jet, so it was just us," he continued, adding that it was a "necessary" escape from all of the hate comments they receive. In addition, Beck claimed that most of the people who have called him and his friends out online would jump at the chance to travel to the Bahamas.

"Let's say, it's just kind of funny because let's say, that someone who's commenting on our stuff, like, ‘You guys need to stay home,' and stuff like that," Beck told the outlet. "Let's say we DM one of them, like, ‘Yo, we want to fly you out to the Bahamas.' If they say yeah, then you screenshot it and say, 'this you?' or something like that." He concluded by noting that "it's just not even worth it" to think about the criticism.

Beck's comments about screenshots seem to be a reference to the fact that shortly before the trip, Charli D'Amelio encouraged her fans to stay at home during an Instagram Live. "If you're using this time to hang out with your friends since you don't have school, please stop being so inconsiderate to others," she said at the time. "You're putting other people at risk to get hurt and to be in pain." (Charli did not post any photos from the Bahamas on social media, and she hasn't commented on the backlash, despite Los Angeles' extended stay-at-home orders.)

This is far from the first time that Beck and the D'Amelios have been called out for disregarding social distancing recommendations during the pandemic; the Tik Tok stars all participated in a series of Christmas-themed YouTube and TikTok videos with their friends, including beauty guru James Charles, as part of a large group. In June, they attended a controversial, star-studded birthday party at the Hype House, and Beck and Dixie were called out by pop star Ariana Grande in October for hanging out at the Saddle Ranch Chop House multiple times during the pandemic.

"Couldn't we have stayed at home just a few more weeks, like all the other countries that are fine and better than we are?" Grande asked during an interview with the Zach Sang Show. "Did we all need to go to f*cking Saddle Ranch that badly that we couldn't wait for the deathly pandemic to pass?" While Beck brushed off the current criticism, his girlfriend admitted to Pap Galore that Grande was "right" to call them out for their behavior. "I don't really know what to think," Dixie said in November. "I mean, she's right. She's right yeah."

More like this
Dixie D’Amelio & Noah Beck “Love Each Other” Despite Breakup Rumors
By Julia Emmanuele, Jordyn Tilchen and Grace Wehniainen
Rachel Zegler Reveals She Had Breast Cancer Scare
By Radhika Menon
Tyra Banks Flubbed The Name Of Charli D’Amelio’s Boyfriend On 'DWTS' Bond Night
By Jake Viswanath
The Try Guys Clarified Ned's Cheating Scandal Timeline In A New Video
By Grace Wehniainen
Get Even More From Bustle — Sign Up For The Newsletter