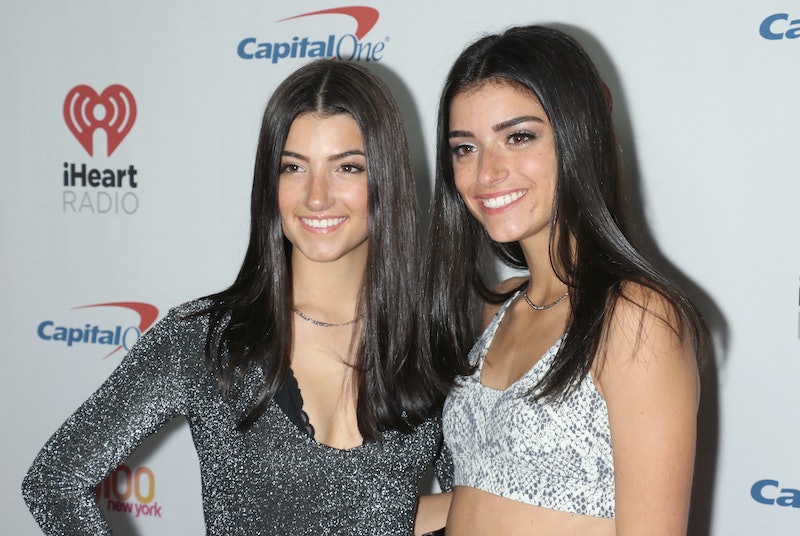 Just over a month after a YouTube controversy involving their personal chef, Charli & Dixie D'Amelio are facing backlash for traveling to the Bahamas in the middle of the pandemic. The sisters have been spotted at the Atlantis resort in Nassau alongside several other TikTok stars, including Noah Beck, Chase Hudson, Madi Monroe, and more. On Dec. 28, videos of the group at the hotel surfaced on social media, and now, people are upset that the stars aren't following the same coronavirus safety measures that they preach about online.

While the social media stars have been coy about revealing their location, fans were able to quickly identify where they traveled based on several of their posts; Monroe shared a photo from a private plane on Instagram before hopping on Omegle to chat with fans from her hotel room. Meanwhile, Bryant, a photographer and member of the friend group, posted a snapshot on his Instagram Story alongside Beck and Hudson that appeared to have been taken in Atlantis' Crystal Court shopping area.

The group's vacation was particularly aggravating for many social media users because Charli recently encouraged everyone to stay at home during an Instagram Live conversation. "If you're using this time to hang out with your friends since you don't have school, please stop being so inconsiderate to others," she said at the time. "You're putting other people at risk to get hurt and to be in pain." (Charli has not yet commented on her vacation or the backlash on social media; Los Angeles, where she lives, is currently under a stay-at-home order.)

The D'Amelios have been called out frequently for not abiding by social distancing regulations during the pandemic. Most recently, they were criticized for making a series of Christmas-themed YouTube and TikTok videos with their friends, including beauty guru James Charles. In June, they attended a controversial, star-studded birthday party at the Hype House — along with Charles, Tana Mongeau, and Nikita Dragun, among others — and were slammed online for ignoring safety restrictions. Just a few months later, Charli and Dixie received angry comments from fans on Instagram after attending a major event in Los Angeles.

In October, pop star Ariana Grande called out influencers for attending parties during an interview on The Zack Sang Show. "Couldn't we have stayed at home just a few more weeks, like all the other countries that are fine and better than we are?" she asked. "Did we all need to go to f*cking Saddle Ranch that badly that we couldn't wait for the deathly pandemic to pass?" In response, Dixie told Pap Galore that while she didn't "really know what to think" about being called out by Grande, the singer was right about the need to stay home.

Unfortunately, Charli, Dixie, and their friends are far from the only influencers who have ignored the measures that were put in place in L.A. to prevent the spread of COVID-19. In July, Jake Paul was publicly condemned by Calabasas mayor Alicia Weintraub for throwing a massive house party. A month later, TikTok star Bryce Hall had his 21st birthday party (which over 100 maskless guests attended) shut down by police; Hall and fellow Sway House member Blake Gray were charged with violating health orders and could face up to a year in jail and a $2,000 fine.

This is the second major controversy surrounding the D'Amelios in the past month. In November, the sisters were called out for their "Dinner With the D'Amelios" YouTube video. In it, they complained about food that was prepared for them by their personal chef, Aaron May, and Dixie spat it out on camera. In addition to being criticized for their "rude" behavior, Charli was called out on social media for complaining about not gaining 100 million TikTok followers in the span of a year. (As a result, she lost over 800,000 TikTok followers in the week after the video was published.)

Following the public scrutiny, Dixie posted a TikTok where she attempted to explain "the full story" behind the video and claimed that her team and Chef May intentionally encouraged her to eat a snail as a prank. Charli also released an apology on Instagram Live and YouTube before tearfully opening up about the amount of online hate she received. "Blatantly disrespecting the fact that I'm a human being is not OK," she said at the time. "The fact that all of this is happening because of a misunderstanding. I just feel like that's not OK."