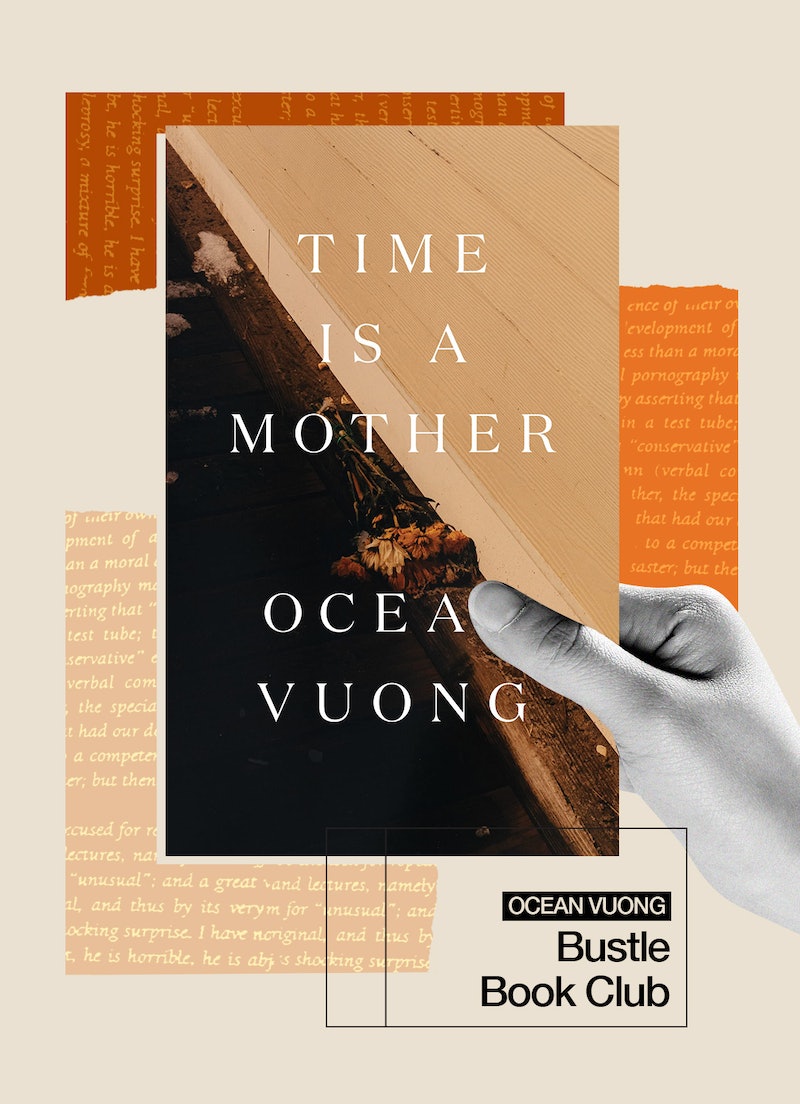 Ocean Vuong considers himself “basic.” He’s obsessed with astrology, and likes to unwind from a day of writing with a vegan ice cream cone. But this sweet treat-loving Libra king probably isn’t what readers imagine when they encounter his emotionally fraught poetry and prose. “My friends say, ‘Ocean, you're so funny in life, but your books are so sad,’” Vuong, 33, tells Bustle. So while working on his new collection, Time Is a Mother, he took their note. “I said, ‘Okay, I can have a little bit of wit and humor that does service to what I'm working on.’”

The subject matter he tackles, though, is as vulnerable as ever. Like his 2019 debut novel On Earth We're Briefly Gorgeous — a work of autofiction that takes the form of a letter written by a young Vietnamese American called Little Dog to his illiterate mother, Rose — Time Is a Mother explores Vuong’s relationship with his mom. This time, he meditates on his grief over losing her to cancer three years ago. Putting himself back in that headspace wasn’t easy, but Vuong came prepared. “It takes months of thinking about something before I write, and so when I do, it's familiar territory. I'm seeing the tunnel of grief and I'm approaching it for months at a time,” he says. “Once I'm in the tunnel, I've trained for this rather than slamming into something and then feeling like you need to eat a box of doughnuts to take care of yourself, which happens sometimes, too.” If the sugar doesn’t help, it’s a sign: “I tell my students, ‘If you need to recuperate after writing, then you should actually recuperate before writing.’”

Below, Vuong reflects on his writing routine and other non-doughnut coping mechanisms.

On what he’s reading now:

There's an interesting book on my shelf that I've been dipping into called Male Colors and it's [about] the construction of homosexuality in Tokugawa, Japan. It's so fascinating because the Japanese didn't have this idea of “homosexuality.” They just did it. They saw sexuality kind of like weather: It visits you and if you're in the mood for it, you do it. We believe that civilization is progress, particularly Western civilization, and then we realize that we were so much more spiritually, sexually advanced in the past. Despite all of our technological advances, we're still very primitive spiritually and I think we still have a lot to learn from the global space.

On the power of pausing:

When I come upon a problem in my work, I turn off the lights and lay on the floor. The best way to think is to lay down in the dark and just tend to it. We're taught to kind of power through: to get to the end, finish, get the word count. We end up forcing a “crash” in the middle of our work, and it's harder to clean up a crash than to avoid it. It could take so much of your energy.

Just leave the desk, lay down, turn off the lights and try to find solutions. Trust your intuition. Something in you tells you that you can't move beyond this point. Maybe the character's not right, the movement's not right, the scene isn't set, it feels false, the metaphor is clunky. You realize that writing is the last part of the imagination. It's the residue of the thinking. So when you step away and think, it's actually more efficient.

I'm teaching at NYU this semester so I get this faculty studio. I don't have any say in the furniture so my desk looks like utter chaos. There's sunscreen, cigarettes, money, a nicotine patch. It's not really [my writing desk] but [it’s] a desk and I work on it. So I guess that's technically what my desk looks like.

On the catharsis of true crime:

There's just so many YouTube channels with obscure cold cases and often they're solved with DNA. So I could go into that worm hole for like three hours and just watch them repeatedly. You learn about this woman who was brutally, terribly murdered in the ‘80s. Then last year, they found DNA evidence through Ancestry.com and found her killer. There's some sort of strange obsession with being involved emotionally with these lives and then being released by these solutions.

On his non-doughnut writing snack:

I always love a bowl of fresh raspberries. They're tart, soft, and I put them on all five fingers. I write by hand, so I'll just put them on my left hand and then as I'm writing, I'll just suck one off.

More like this
Watch The Emotional Trailer For Dolly Alderton’s 'Everything I Know About Love'
By Bustle UK
10 Must-Read New Books Out This Week
By K.W. Colyard
Thank U, Ex
By Rosemary Donahue
At 28, Minnie Driver’s Personal Life Was “Falling Apart”
By Kate Dwyer
Get Even More From Bustle — Sign Up For The Newsletter