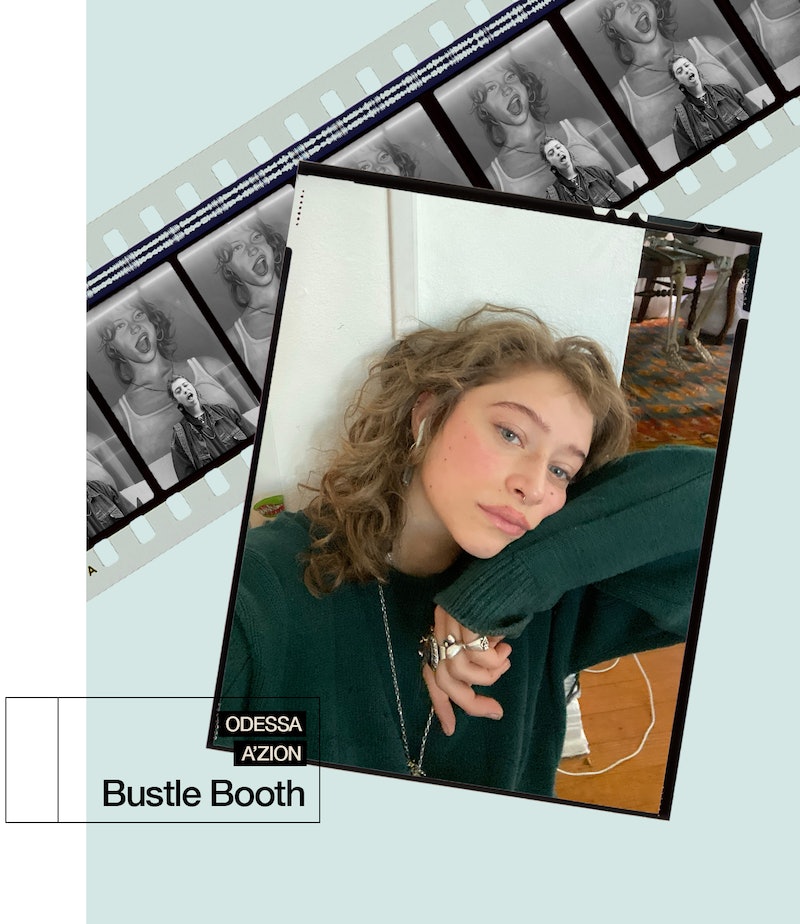 Odessa A’zion isn’t sure why she keeps playing troubled teens. There was Liv, the unhoused teenager on Nashville; and Shannon, the high school dropout and sometimes party girl on CBS’s Fam. Now, on Netflix’s Grand Army, A'zion plays Joey Del Marco, an outspoken popular girl with a rebellious streak. All of her most prominent characters share a general 'f*ck you' attitude toward the world and are navigating tumultuous times. “I have kind of a tough shell, so maybe that’s why I get all these tough shell characters,” A’zion tells Bustle over FaceTime. “But you know, I am actually pretty vulnerable underneath.”

This vulnerability shines through in Grand Army, which follows a group of high schoolers as they navigate life at their prestigious New York City public school. Joey’s story, which is the central plot point adapted from showrunner Katie Cappiello’s 2013 play Slut, emerges from the aftermath of her sexual assault by two close friends. The role was grueling for A’zion — coming home from set at 6 a.m. crying kind of grueling — but it marked a big shift in her confidence as an actor.

“I was just more worried when I first started acting,” says 21-year-old A’zion, who landed her first substantial role as Liv on Nashville at 15. “I wanted everyone to be pleased with what I was doing.” Now, she feels much more comfortable advocating for herself on set. "It's only fair to speak my mind."

A’zion grew up in close proximity to the film industry. Her mother is actor, writer, and producer Pamela Adlon, whose show Better Things is loosely based on her experiences raising three daughters on her own; A’zion’s older sister Gideon is also an actor. “[I’m] the black sheep of the family,” A’zion jokes.

Despite being raised in an entertainment family, A’zion’s online presence is refreshingly uncurated; her recent Instagram Lives are more day-in-the-life than they are aspirational. Many feel like a visual diary of her months spent living in Toronto and New York with her fellow Grand Army castmates (she and Crystal Sha're Nelson, who plays Tor, shared a single room in New York). During quarantine, she’s worked to raise awareness for Black Lives Matter and shared snippets of her music — another one of her passions, and A’zion has no shortage of passions.

She smiles the entire time she talks about traversing Toronto on her little red bike and growing close to her Grand Army co-stars. When she recommends something, she really means it (she has been really into Korean psychedelic rock lately and highly suggests looking up the genre). It’s a natural sincerity that translates into all her on-screen roles: When A’zion is involved, it doesn’t feel like you’re watching a caricatured troubled teen, but a young woman coming into her own.

Get to know more about A'zion in her Bustle Booth below.

I don’t have enough storage for the weather app lol.

That my friend, is a secret.

Not really cartoons but my favorite shows were Gullah Gullah Island & HR Pufnstuf.

Survivor or Naked and Afraid.

"The Origin of Love" from Hedwig and the Angry Inch.

Everyone putting the elbow grease into helping fight the virus, peaceful protesters and small businesses that have found ways to stay afloat despite these difficult times.

More like this
On 'The Handmaid’s Tale,' Christine Ko Fights Back
By Gretchen Smail
Devi Is Going To Meet A “Smoldering Bad Boy” In ‘Never Have I Ever’ Season 4
By Jack Irvin and Gabrielle Bondi
Netflix Reveals First Look At Wednesday In The 'Addams Family' Spinoff Series
By Bustle Editors
Here’s Everything Coming To & Leaving Netflix In October
By Jake Viswanath
Get Even More From Bustle — Sign Up For The Newsletter