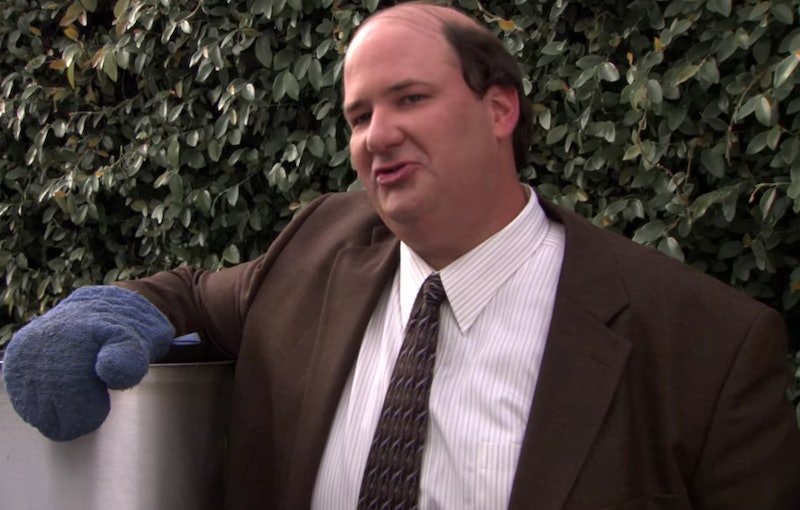 Along with Jim and Pam getting married and Michael grilling his foot, Kevin dropping a pot of chili is undoubtedly one of the most memorable Office moments. As such, actor Brian Baumgartner recently revealed that Kevin’s infamous chili scene still follows him around to this day. While The Office finished its nine-season run in 2013, the NBC workplace sitcom has amassed a new generation of fans thanks to Netflix. And in turn, the scene in Season 5, Episode 26, titled “Casual Friday,” in which Baumgartner’s Kevin brings a huge pot of his famous chili (the trick is to undercook the onions) into the office, only to spill the remnants all over the floor, has become an internet staple as far as GIFs and memes go.

"To me, it's crazy,” Baumgartner said of the scene’s cult following in an interview with Entertainment Tonight on July 15. "The fact that it caught on, I thought it was funny." He continued, “One of the things about Kevin that makes him special is, he is trying his best to succeed. There's a small thing in another episode where he wins back a parking spot and says, 'It just feels good to win one.' I feel like there's a lot of that in a lot of us." According to Baumgartner, the moment is now inescapable. "But that chili scene, how huge it is now, it's almost like every Monday I get sent something about,” he said.

Baumgartner continued, “I can't post anything on social media about anything. It could be, like, me golfing, and someone will say, 'Hold still, the chili,’ and I'm like, 'That doesn't work! That is not applicable to what I just wrote.’ Yeah, people love it." He also revealed that the scene only took one take, something he’s "tremendously proud of."

The actor, who portrayed the beloved Dunder Mifflin accountant Kevin Malone in the series, launched a limited series podcast with Spotify titled An Oral History of The Office on July 14. Hosted by Baumgartner himself, the 12-episode series pulls back the curtain on what went into the creation of the popular series, as well as why it still resonates today. The podcast will also feature guest appearances by Steve Carell, John Krasinski, Jenna Fischer, Rainn Wilson, Angela Kinsey, and more as they recount never-before-heard stories from the show.

During a Reddit AMA on July 7, Baumgartner said An Oral History of The Office was created, in part, as a response to the book The Office: The Untold Story of the Greatest Sitcom of the 2000s: An Oral History by Andy Greene. “I have not read the book. It was written- you understand- by someone who was NOT on the inside,” Baumgartner wrote. “We wanted to tell our own story.”

More like this
Netflix Shut Down 'Bridgerton' S3 Rumours About A “Very Dark” Storyline
By Bustle
This 'Gossip Girl' Wardrobe Error Has Gone Viral On TikTok
By Alyssa Lapid
'The Queen’s Gambit' Season 2 Tweet Wasn’t From Anya Taylor-Joy
By Mary Kate McGrath, Jack Irvin and Grace Wehniainen
This 'One Tree Hill' Wardrobe Error Is Going Viral On TikTok
By Brad Witter
Get Even More From Bustle — Sign Up For The Newsletter
From hair trends to relationship advice, our daily newsletter has everything you need to sound like a person who’s on TikTok, even if you aren’t.