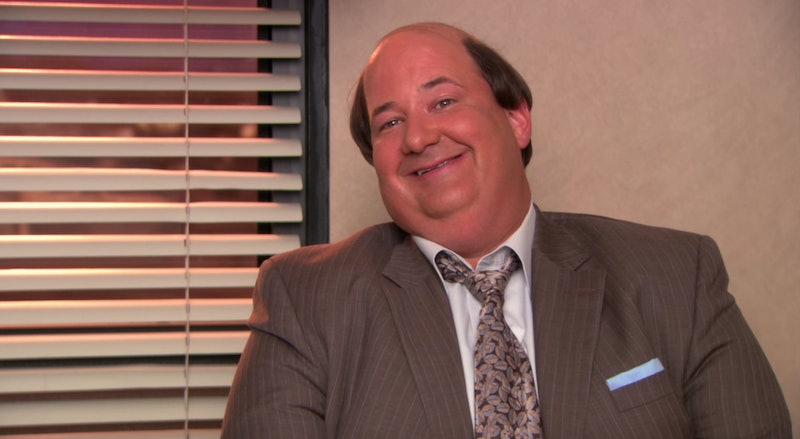 Is there such a thing as having too many Office-related podcasts? That’s a rhetorical question, of course, because the answer is obviously a resounding no — which is why fans of the series may be excited to learn that The Office is getting an oral history podcast that will kick off later this month and be hosted by none other than the show’s very own Brian Baumgartner, aka chili chef extraordinaire, Kevin Malone. According to Entertainment Weekly, the podcast, titled Oral History of The Office, will span over the course of 12 episodes starting on Tuesday, July 14 where it will be available exclusively on Spotify. Three of the episodes will premiere on that day, followed by one new episode debuting each following Tuesday.

Oral History of The Office will seek to chronicle the very beginning of the show’s creation, per a press release obtained by Bustle, and document “how this unlikely UK import from Ricky Gervais and Stephen Merchant made it to the US airwaves, from the search for a network home, to the casting, assembling the talent behind the camera, and the memorable storylines and major moments.” Interested listeners can also look forward to hearing firsthand accounts from various members of the cast and crew, including some fan favorites from the Dunder Mifflin gang, such as Steve Carell (Michael Scott), John Krasinski (Jim Halpert), Rainn Wilson (Dwight Schrute), Jenna Fischer (Pam Beesly), and Angela Kinsey (Angela Martin) — to name a few. Additionally, Grammy winner Billie Eilish, who has been a long proclaimed Office superfan, will serve as special guest.

Along with the podcast’s overall description, a trailer for Oral History of The Office has also been released, providing a sneak peek at what fans of the series can expect to learn about the show’s history, and teasing the answer to the age-old question: why is everyone so addicted to The Office? (Though we here at Bustle have our own theories about that.) Baumgartner’s voice may sound a bit different from the slow, droning voice of Kevin we’ve all come to know and love, but make no mistake, it’s definitely him, and he is ready to spill all of the tea on never-before-heard stories from The Office set.

This isn’t the only Office podcast to come out of the woodwork in the wake of the show’s nine-season run. Kinsey and Fischer launched their own rewatch podcast, Office Ladies, back in 2019. The two fof them break down different episodes from the series each week, provide behind-the-scenes intel of what it was like to film those moments, and answer questions from listeners.

The world may be craving an Office reboot, but with so many members of the cast reuniting on all of these podcasts, it’s definitely the next best thing.

More like this
'The Queen’s Gambit' Season 2 Tweet Wasn’t From Anya Taylor-Joy
By Mary Kate McGrath, Jack Irvin and Grace Wehniainen
Twitter Can’t Believe The Madonna Biopic Is Scrapped & Fans Have A Solution
By Alyssa Lapid
Ashton Kutcher Wants Danny Masterson “To Be Found Innocent” In Rape Retrial
By Jake Viswanath
At 28, Rosie Perez Risked Her Career To Stop Playing Stereotypes
By Gabrielle Bondi
Get Even More From Bustle — Sign Up For The Newsletter
From hair trends to relationship advice, our daily newsletter has everything you need to sound like a person who’s on TikTok, even if you aren’t.