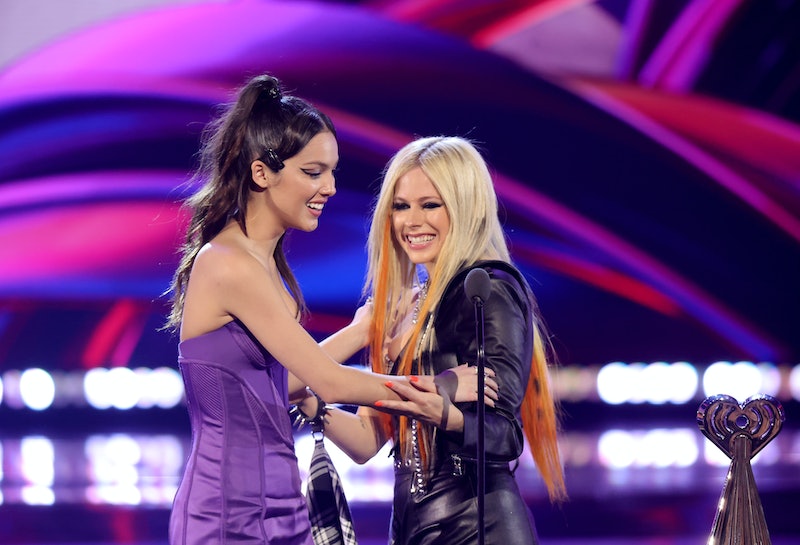 Chill out, what ya yellin’ for? Olivia Rodrigo gifted Sour concertgoers in Toronto a sweet treat when she brought Avril Lavigne on stage for a surprise “Complicated” duet on Friday, April 29. Fan Twitter videos showed Rodrigo on stage gushing about a woman who “broke down so many barriers and opened so many doors for girls like me,” adding that she “can’t sing her praises enough.” After hinting that this artist was from Canada, cheering fans caught on to what was happening when the “Drivers License” singer excitedly announced that she felt “so, so, so lucky” to welcome Lavigne to the stage to sing her 2002 hit “Complicated.”

After the performance at Toronto’s Massey Hall concluded, Lavigne posted on Instagram that she’d just “jumped up to sing ‘Complicated’” on stage with Rodrigo, adding, “It was very sweet to perform with you tonight on your SOUR tour!!” Tagging her duet partner, she also wrote, “Have an incredible tour gurl. Keep killing it. Sending you so much love.” In the post’s comments section, even fellow “pop-punk princess” Gwen Stefani chimed in, “this is soooo cute!!”

The next morning, Rodrigo also posted about the “special” night, thanking “dearest” Lavigne for singing with her. The three-time Grammy winner addressed her friend directly, adding, “look up 2 u so much,” in the Instagram caption.

As photos and videos of the surprise performance began flooding the internet, fans lost their collective minds, with one tweeting that Rodrigo and Lavigne “are the duo the world needs right now.” Others even pointed out that the performance was the perfect follow-up to Billie Eilish and Paramore remixing “Misery Business” at Coachella.

Though this marked their first joint performance, it was not the women’s first time sharing the stage. Lavigne presented Rodrigo with the Songwriter of the Year award at the December 2021 Variety Hitmakers Brunch in Los Angeles. “This year, we were introduced to a new artist whose debut album marked a major return for rock ’n’ roll on the charts,” Lavigne said in her introduction, per People. “Olivia’s singles from her album Sour have been a part of the collective psyche of 2021, and she wrote every single one of them. Her songs are personal, her songs are raw, and her songs are relatable.”

Rodrigo, in return, paid homage to Lavigne’s artistry while accepting the award. “First of all, I want to thank Avril for coming here today. I am such a massive fan of you,” the singer, who’s covered “Complicated” at each Sour tour stop (though typically without a special guest) so far, exclaimed. “I look up to you so much. So, this is so surreal for me. Thank you for the love and support.”

Surely their joint performance was even more of a full-circle moment.