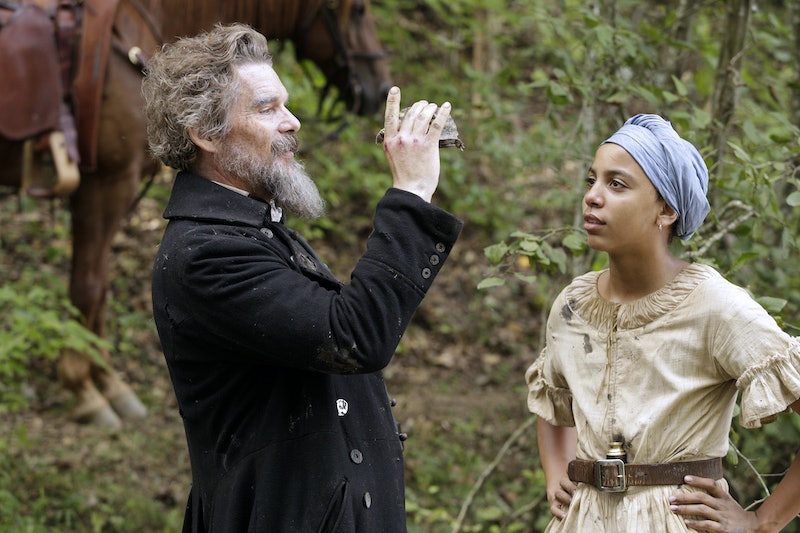 In the new Showtime miniseries The Good Lord Bird, most of the characters are real historical figures. Most notably, the series features the abolitionists John Brown (Ethan Hawke), Frederick Douglass (Daveed Diggs), and Harriet Tubman (Zainab Jah). But the series' main protagonist is a different story. Onion from The Good Lord Bird isn't based on a real person, though his surroundings are steeped in history. The series is based on the historical fiction novel of the same name by author James McBride, which is framed as the memoirs of former slave Henry Shackleford, AKA Onion. The story is told from his point of view as an old man looking back on his travels with Brown as a child as he encounters several important moments and figures in the lead-up to the American Civil War.

In a way, Onion is almost like Forrest Gump in that he's a fictional character who witnesses monumental moments in US history while crossing paths with numerous larger-than-life figures. But instead of chronicling America's post-WWII years like Forrest, Onion lives through the Bleeding Kansas era of the mid-19th Century. But it wasn't actually Forrest Gump — who also originated as a character in a book — who inspired McBride to create Onion. Instead, the character does not seem to have been inspired by any one individual at all, but rather had different facets of his identity forged by McBride's own imagination.

"I just experimented with a lot of ways to find that voice," McBride told Boston's WBUR of how he came up with Onion's way of speaking. "I knew I didn’t want it to be a third-person account. There’s an old-time way of talking that old Black folks in my life spoke. That kind of showed itself and I wanted to see if it was strong enough to hold up ... The fact that he was a child just seemed appropriate ‘cause he’s really an old man looking back in 1941, speaking the way an old man storyteller would tell it."

In both the book and the series, Brown mistakes Onion for a girl when he meets him and puts a dress on him — a dress that Onion wears for most of the story. McBride gave his reasoning for that character decision in an interview with NPR. "I really had to put him in a situation where I could also kind of work with identity, which powers stories," he told the outlet. "And so it seemed fitting that he would be a Black boy mistaken to be a Black girl at a time when Black life was not valued with the same equality that white life was valued."

Onion from The Good Lord Bird is not based on an actual person, but that doesn't make him any less of an interesting character than the real-life legends with whom he interacts on screen and on the page.