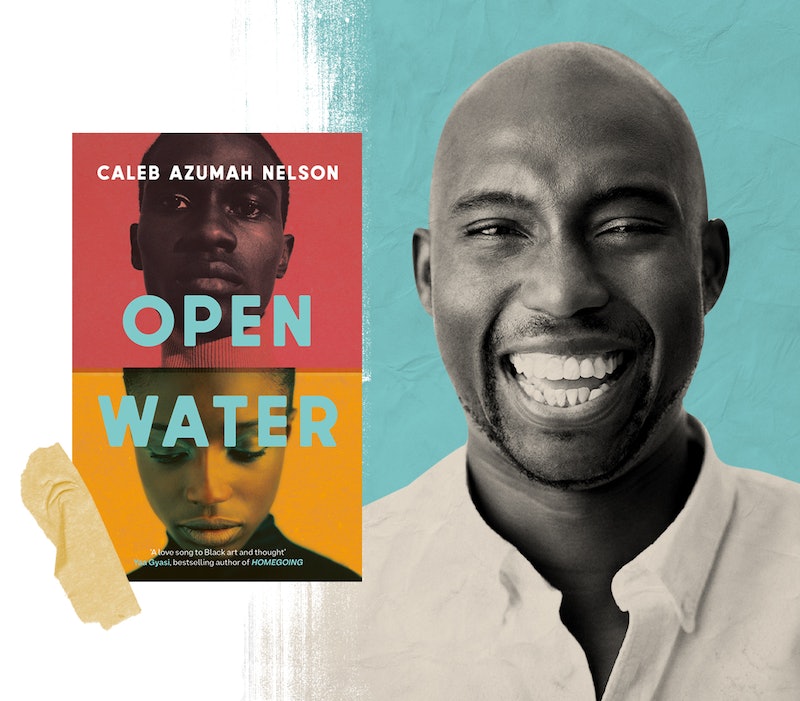 Valentine’s Day is one of those holidays we all love to hate, or hate to love. Either way, we can’t escape "love" as a predominant theme in February. Apt though, that this is the month of publication for Caleb Azumah Nelson’s debut novel, Open Water, in which love is one of the central themes.

In many ways, Azumah Nelson’s book reminds me of first falling in love. The initial thrill, combined with the fear that depth of vulnerability can bring – and in Open Water, these become very real dangers for the protagonists. The story follows two nameless friends who fall in love, encapsulating every emotion that process entails. Throughout, Azumah Nelson’s prose is wonderfully evocative, raw and real.

The novel is also a celebration of Black achievement (novelist Yaa Gyasi called it “a love song to Black art and thought”) and references the music of Dizzee Rascal, Frank Ocean, and Solange, alongside the works of James Baldwin, Zadie Smith, and Teju Cole, among many others. Set in South East London, where Azumah Nelson grew up and is still based, it is also a tribute of sorts to his home.

Wrapped up in all of that, it's a tale about two artists – he's a photographer, she's a dancer – figuring out “how to preserve a space of art and softness in a racist world,” as author Megha Majumdar perfectly describes. It's an exploration of race and masculinity, the struggle to be seen, and the ways in which language can fail to convey the grief that a loss of self – caused by a denial of identity – creates. Words do not fail Azumah Nelson, though, as this excerpt so powerfully proves.

There is an anger you have. It is cool and blue and unshifting. You wish it was red so it would explode from your very being, explode and be done with, but you are too used to cooling this anger, so it remains. And what are you supposed to do with this anger? What are you supposed to do with this feeling? Some of you like to forget. Most of you live daily in a state of delusion because how else is one meant to live? In fear? Some days, this anger creates an ache so bad you struggle to move. Some days, the anger makes you feel ugly and undeserving of love and deserving of all that comes to you. You know the image is false, but it’s all you can see of yourself, this ugliness, and so you hide your whole self away because you haven’t worked out how to emerge from your own anger, how to dip into your own peace. You hide your whole self away because sometimes you forget you haven’t done anything wrong. Sometimes you forget there’s nothing in your pocket. Sometimes you forget that to be you is to be unseen and unheard, or it is to be seen and heard in ways you did not ask for. Sometimes you forget to be you is to be a Black body, and not much else.

A few hours later, you’re walking up the road to grab a patty from the Caribbean takeaway. You’re hungry for the sweet yellow pastry, filled with spicy meat. You’re hungry for the comfort. So you’re walking, a route you take every day, along the main road of Bellingham, when you see Daniel, cycling towards you. He dismounts as he reached the Morley’s, and he daps you with a wide smile on his face, his hips moving in time to whatever spills from his headphones. It’s like all has been forgotten. It is like you can let go of your anger for a moment. His pleasant rhythm is infectious and you two step around each other, before laughing and splitting way, he heading into the chicken shop, you a few doors down. Inside the Caribbean takeaway, a dub baseline rocks the windows. You spy the cook tying up his dreads in the kitchen before emerging into the main area, crooning ‘I’m stilling love with you,’ interpolating the classic. It makes you think of her, of playing this song, holding her neat waist, pulling her close, closer, feeling her smile as she lets the back of her neck settle into your chest.

‘What can I get for you, brother?’ He asks. You decide, on impulse, to treat yourself to a serving of mac and cheese. You watch as he packs some wings into a box as extra, and when you try to pay for them, he shakes his head.

‘I can tell you need some good food,’ he says. You pound fists, and depart.