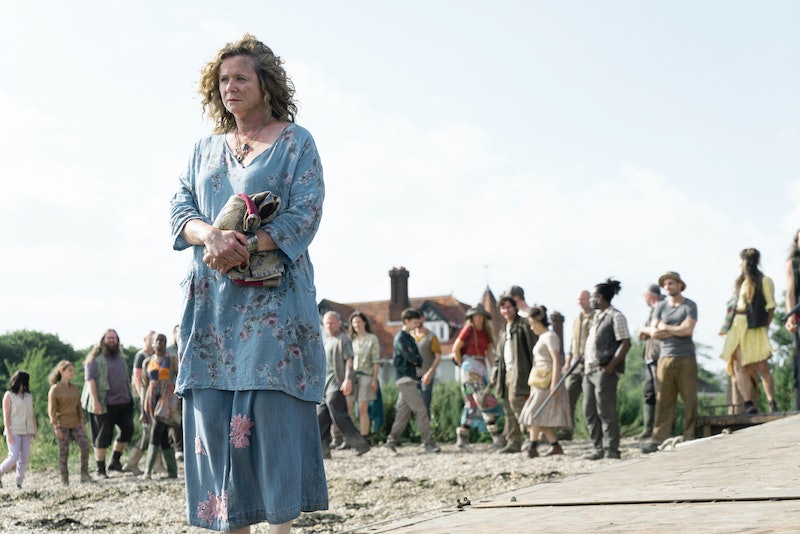 HBO's new psychological drama, The Third Day, centers around a strange and ominous island called Osea, where Jude Law's character Sam finds himself entangled in a surreal chain of events. It's a weird show, but Osea — which is in fact real island — proves to be the perfect setting. Its IRL history is just as odd.

As a bartender on the island explains in the premiere episode, Osea was founded by a brewer named Frederick Nicholas Charrington, who decided to turn the island into a retreat for people recovering from alcohol dependency. According to the Guardian, Charrington bought the island in 1903 and it remained a rehabilitation place until 1917, when it was purchased by the UK's Royal Navy. It was used as a secret base during World War I, after which it was eventually passed into private ownership. Per the Guardian, it was then briefly turned back into a rehab center; Amy Winehouse was among those who stayed there before its closure in 2010.

Music producer Nigel Frieda purchased the island for $6 million in 2000, and he's since made Osea's biggest draw its recording studio. Per Metro UK, Rihanna even reportedly recorded there. But the Osea visitor's website also touts the island as a place for weddings, corporate retreats, parties, festivals, and more. A room currently costs about $315 per night, but you couldn't pay me to go to this place after watching the first episode of The Third Day.

The island portrayed in the show is super creepy, with the townspeople seemingly engaging in animal (and potentially human) sacrifice. It's a fictional story, though it may borrow from some of the more salacious rumors surrounding Osea. Some people believe Charrington, the founder, was famed killer Jack the Ripper.

Among the alleged evidence is that he was alive during the same time period and of the same average age and build. Charrington was also supposedly very religious and preached against people turning to vices like alcohol and presumably sex. Jack the Ripper killed mostly sex workers. The connections are flimsy, but the show certainly seems to have been inspired by this potential history: there's a lot of bloody slasher imagery in the first episode.

Because Osea is real, the cast filmed much of the show on location. Actor Emily Watson found it to be a little eerie after taping such intense scenes all day. "On a clear day with a sunny sky, it's beautiful. There's amazing birdlife. But it's got all these creepy hedge tunnels and it's just got a sense that stuff has happened there," she told Essex Live. "I think it's a little bit creepy myself."