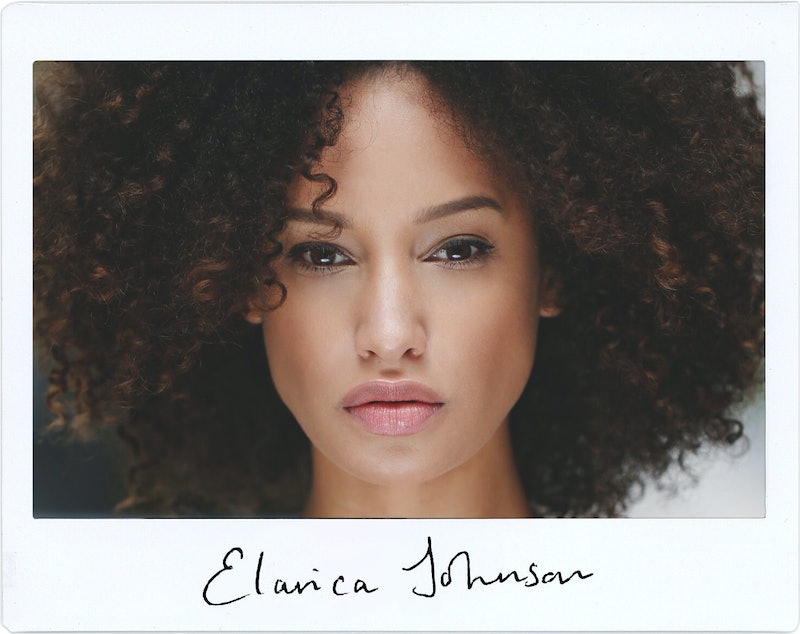 When celebrities (virtually) hang out with Bustle writers, we want to give them the chance to leave their mark. Literally. So we hand them a pen, a piece of paper, a few questions, and ask them to get creative. This time, P-Valley star Elarica Johnson is leaving her mark in the Bustle Booth.

If there’s one thing that Elarica Johnson adores, it’s magic and fantasy. Her acting credits read as a roll call of exactly that: she previously played the waitress in Harry Potter and the Half-Blood Prince, and the bloodthirsty Juliette Durand in A Discovery of Witches. And while her latest role as stripper Autumn Night in P-Valley is pretty far removed from witchcraft and wizardry, she has found some parallels.

“While there were huge differences between filming P-Valley compared to Harry Potter and A Discovery of Witches, there are quite a few similarities, which I noticed very early on,” she tells me. “When you step on set, it’s like stepping into a magical world that you’ve never been to before.”

Johnson moved from London to Atlanta to film P-Valley, a significant change of scene, she says. “Culturally, Atlanta is just different. America in general has a different vibe – overall I definitely experienced a culture shock. I constantly felt like how you’d feel on holiday. Atlanta is a lovely place and it was a fantastic experience.”

The highlight of this experience, she says, was working with incredible women, in particular the show’s creator Katori Hall. “Anything that she touches, she knows what she’s doing,” Johnson says. “She understands we all hit those hard times, and that women can still be seen in a positive light even if they’re going through something difficult.” P-Valley’s pilot episode taps into this, exploring the abusive relationships and traumatic pasts of a tight-knit group of Southern strippers.

Giving strong female characters a platform to be seen and heard is Johnson’s main motivation. “I hope that with the roles that are to come, the similarities are that these women are brilliant, they’re strong, they’re mean, they’re genuine, they’re all kinds of things,” she says. “But that they’re also written well and their journeys are stories that might change or have an impact in someone’s life.”