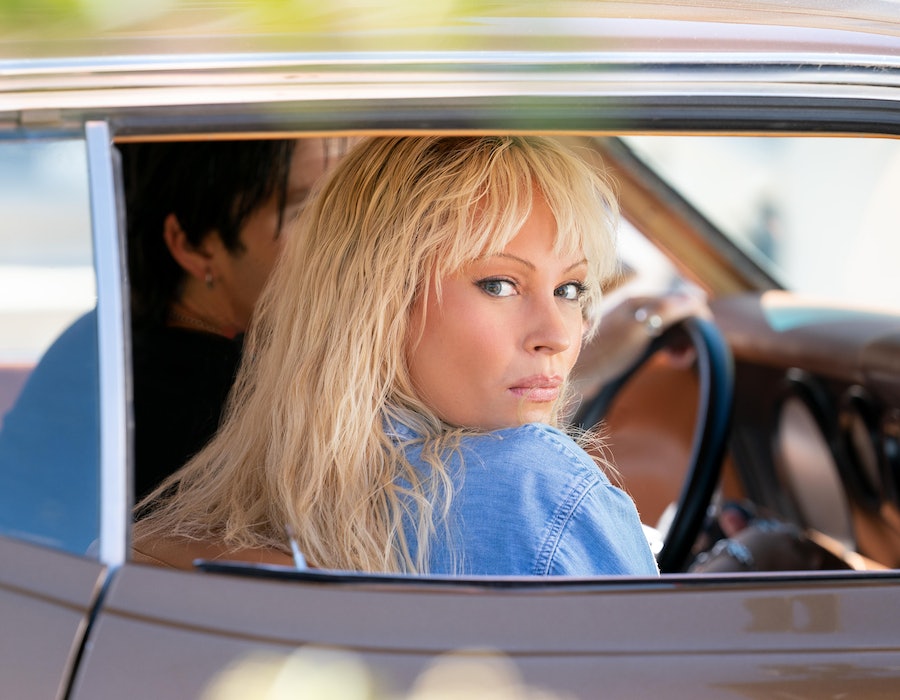 If you grew up in the 90s, you grew up with Pamela Anderson and Tommy Lee. For a few years, the Baywatch star and Mötley Crüe drummer were America’s It couple. And then came the notoriety of The Tape: a home video sex tape stolen from their home and sold to the public, first on VHS and then on the internet. At the time, the duo — and Anderson in particular — were ruthlessly mocked for the tape’s release, as if they’d wanted it made public, and not been the victims of an extraordinary breach of privacy. Now, Hulu’s limited series Pam & Tommy revisits these events with a different tack. According to the show’s creative team, the project is designed to shed light on the real story behind the tape, and to vindicate Anderson. As star Lily James, who plays Anderson in Pam & Tommy, told Variety, “It’s the only way we can grow and learn and move forward.”

Biopics have long been a staple of Hollywood, but over the past five years, they’ve taken on a particular mission: to reclaim a rarified group of famous women — nearly all of them white, many of them beautiful and blonde — that the mass media made mincemeat of in the ‘80s and ‘90s. Projects like Spencer, I, Tonya, American Crime Story: The People v. OJ Simpson, and Pam & Tommy paint their subjects as misunderstood feminist icons, offering a theoretically more progressive vision of history, one that illuminates and vindicates mistreated women whose names and stories are already familiar to viewers. This reclamation trend encompasses documentaries, podcasts like the popular alt-history podcast You’re Wrong About, and more, but the based-on-a-true-story approach offers a particularly enticing promise: justice through entertainment.

For some of the women featured in these projects, the experience has been vindicating, and even financially remunerative: Tonya Harding sold her life rights to the producers of I, Tonya and received a percentage of the film’s profits, while Monica Lewinsky served as a producer on last year’s American Crime Story: Impeachment. Others, like Princess Diana and Tammy Faye Bakker, are dead, and can’t comment on how their legacies are being shaped and re-litigated.

And then there’s Pam & Tommy. The producers didn’t receive Anderson’s blessing to make the show, which was based on a Rolling Stone profile of Rand Gauthier, an electrician who worked on the couple’s home renovation and claims to have stolen their infamous sex tape. Despite repeated requests, Anderson never spoke to the show’s creators, and has yet to publicly comment on the series; sources close to her, however, have expressed outrage on her behalf, telling ET that Pam & Tommy is “very painful for Pamela Anderson and for anyone that loves her,” and People that “it's unfair that she is being re-subjected to this trauma, like re-opening a wound.” Although Pam & Tommy writer Robert Siegel told Variety that “At every step of the way, we’ve tried to do right by her,” it’s hard not to think that the easiest way of “doing right” by Anderson would have been by not making Pam & Tommy at all.

Pam & Tommy is an extreme example, but it illustrates the moral treacherousness of all the projects in this microgenre. In every case, despite the assurances of producers that they want to right a public wrong, these shows and films are designed to profit off of their female characters’ pain. Like every piece of Hollywood entertainment, they’re built to make money — and the “entertainment” being sold, in this case, is the most difficult and traumatic episodes of these women’s lives. In The Eyes of Tammy Faye, Tammy Faye becomes addicted to prescription drugs; in Spencer, Diana wrestles with bulimia; in I, Tonya, Margot Robbie’s Tonya is the victim of domestic violence. And yet, at the same time, audiences are reassured that by watching these films, they’re participating in something good, some grand feminist project. Consuming these women’s stories, which once might have been a guilty pleasure for the public, is transformed into a safe and even virtuous activity.

These projects try to have their cake and eat it, too — particularly I, Tonya, in which director Craig Gillispie (who also worked on Pam & Tommy) seems to encourage audiences to laugh at Harding’s misfortunes. In particular, the scenes of domestic violence are bizarrely light-hearted and often scored by a zippy pop song from the ‘80s or ‘90s, a decision that undercuts the severity of what’s being depicted on screen. Yet the film also claims a moral high ground when it comes to her public shaming. “I was loved, for a minute. Then I was hated. Then I was just a punchline,” Tonya says in a talking head, reflecting on her life as a public figure. “It was like being abused all over again, only this time it was by you. All of you. You’re all my attackers, too.” This scene is meant to give viewers an opportunity to side with her against the media, and how she was portrayed in the past. But she may as well be talking about the movie.

It’s not enough, though, for the women in these projects to suffer. In order for them to be transformed into 21st century martyrs, they also have to become avatars of contemporary feminist ideas. The edges are smoothed from their stories, rendering them more palatable to current audiences, often at the expense of the women they’re supposedly serving.

The Eyes of Tammy Faye, for instance, sanitizes the the real story of Tammy Faye’s life and career in order to paint her as a feminist hero. She and her husband Jim Bakker were televangelists who used their popular Christian satellite channel, which advocated the prosperity gospel, to defraud people of millions of dollars on an annual basis; eventually, the couple’s empire collapsed in the wake of rape allegations against Jim Bakker. But the film barely addresses this scandal, and insteads attempts to rehabilitate Tammy Faye (played by Jessica Chastain, nominated for an Oscar for her performance) as a relatively uncomplicated feminist figure, placing particular emphasis on her advocacy for the LGBTQ community. While it’s true that Tammy Faye was more progressive than many of her televangelist peers — her interview with Steve Pieters, a pastor and gay man with AIDS, was daring and meaningful — the film depicts her as hapless and naive, clueless about the church’s finances or her husband’s sexual assault. Though she may come across as sympathetic in the film, this depiction also strips her of agency and complexity.

Director Pablo Larrain’s recent biopic Spencer goes even further. The film’s Princess Diana (Kristen Stewart, also an Oscar nominee) bears little resemblance to the real woman, whom friends describe as almost superhumanly socially gifted and sharply funny, if also prone to solipsism, depression, and a quick temper. (She once shoved her stepmother down a flight of stairs.) These complicated and not necessarily appealing qualities are washed away in favor of a wan, spectral figure, whose biography is given a 21st century feminist spin: Instead of depicting Diana’s real romances with men, Spencer teases a would-be romance with her female dresser.

In Pam & Tommy, this instinct to idealize leads to a particularly troubling outcome: advertising an abusive relationship as “The greatest love story ever told.” The show leans heavily on the romance between Anderson and Lee, but leaves out the fact — except for in a brief postscript — that Lee was jailed for spousal battery in 1998. Not only does this change make for less interesting television, it undermines the project’s efforts to position itself as a feminist reclamation project for Anderson. Softening Lee makes for a more appealing narrative, and certainly makes him a more sympathetic figure, but it also does Anderson a disservice to obscure the truth of their relationship.

Frustratingly, in spite of all this, Tommy Lee winds up being the more interesting character in Pam & Tommy: He may love Pamela, but he’s still a jerk to everybody else. The show’s Pam doesn’t get to be prickly, unpleasant, or even all that complicated; she’s a sweet, innocent girl who finds the Playboy Mansion enchanting. She’s also, conveniently, an eloquent spokesperson for contempory feminism. In one of the series’ most teeth-grinding moments, after a court has rejected their petition to stop Penthouse from publishing images of the tape, she explains to her lawyer that they won’t be able to stop the dissemination of the tape because “I don’t have any rights … because I have spent my public life in a bathing suit. Because I have the nerve to pose for Playboy. [The court] can’t actually say that sluts, and that’s what this ruling is saying I am, in case you’re unclear, they can’t actually say that sluts don’t get to decide what happens to pictures of their body. That I don’t get to decide what happens to my actual body. So they say something else instead.”

In addition to being an implausibly articulate speech from a character who is supposed to be in extreme emotional distress, this monologue serves as an inadvertent summary of Pam & Tommy. Anderson, in 2022, still doesn’t have the rights to control how her story or her (fictional) body is depicted on screen. The producers of the show can’t say that, so they say that they’re making it “for” her. Sue Naegle, an executive at Annapurna who produced the show, told Variety that she was motivated to make the show because she was “bothered” by the unfair response to the tape in the ‘90s, and wanted “the chance to tell the story and to get people to see and understand how it was nobody’s business, it was nobody’s right.” Except, apparently, that of Naegle and her colleagues, who will profit handsomely off the series, while Anderson doesn’t see a cent.

More like this
Pamela Anderson’s Dating & Marriage History Could Be Its Own TV Series
By Jake Viswanath
Wait, Is Barney Stinson Related To Sophie On 'HIMYF'?
By Gretchen Smail
Here’s Everything Coming To & Leaving Netflix In February
By Jake Viswanath
Everything To Know About 'Only Murders In The Building' Season 3
By Gretchen Smail and Kadin Burnett
Get Even More From Bustle — Sign Up For The Newsletter
From hair trends to relationship advice, our daily newsletter has everything you need to sound like a person who’s on TikTok, even if you aren’t.